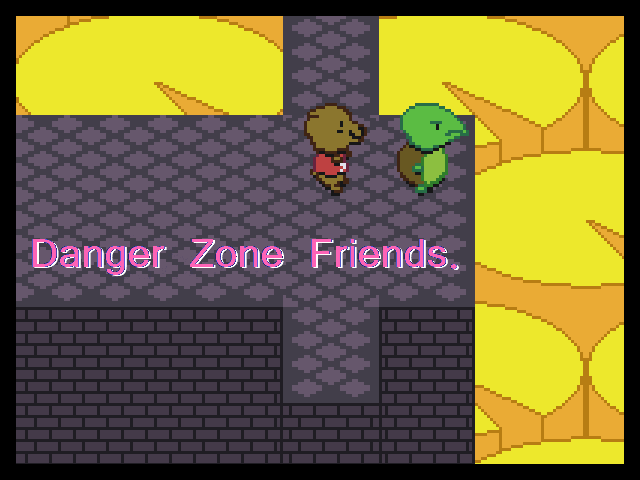 I went into "Danger Zone Friends" hoping that it would be a fun experience. After all, this project is marked as a comedy game, but as the game dragged on and on and on and on and on. I couldn't help but feel like the game was trying to suck all of the joy out of my life. Though, I suppose some would argue that comedy is highly subjective and that some of the jokes in this game just might be flying over my head because their in-jokes between the developer and his girlfriend.

You play as couple of friends that apparently share a single room apartment that only comes outfitted with a few cupboards, a fridge, and a stove. If anything you'd think the game would be about them trying to find a new apartment that comes with a bedroom as well, but instead you and your friend set out on a quest to find cheese. After all, you can't eat scrambled eggs without cheese! Albeit, they did forget to include the need for hot sauce. At least that's what I was told by Mao from "Disgaea 3: Absence of Justice". Of course, this simple task quickly turns into an insane journey when our heroes enter the Danger Zone!

As far as I can tell the main two jokes in this game are the appearance of the enemies as well as just how crazy the situation our protagonists find themselves in. Sadly, the former suffers because most of the enemy designs really aren't that far off from stuff you'd find in a lot of other games. As a result they really aren't that amusing to look at. And the issue with the latter is that the game is constantly hitting the drag shoot in order to pad the game out. So much so, that I was starting to hate this game by the end of it.

"Danger Zone Friends" is a rather odd comedy game in that it features rather well-rounded combat. So much so that I really question why alchiggins thought it was a good idea to mark this project as a comedy game. After all, the longer the player needs to spend in combat the longer the gaps there are between jokes. As a result the game constantly looses any momentum it's trying to build up when it comes to getting the player to laugh. So much so that it becomes rather easy to start hating the game for feeling needlessly padded.

As far as I can tell the game went entirely custom when it comes to it's look as well as musical score. On the plus side this does help to give "Danger Zone Friends" a unique flavor. On the downside the art isn't particularly impressive for the most part nor are the tracks going to blow anyone away. And there are a few odd bits and pieces within the game where background music doesn't exist at all. And if you fight the final boss for long enough you'll clearly hear a short gap of silence as the background music prepares to start over in a never ending loop.

"Danger Zone Friends" really shouldn't mark itself as a comedy game in my opinion. This is because the combat is so well-balanced and eats up so much time as a result that the game really can't build any momentum when it comes to delivering jokes. Add in the fact that a lot of the jokes are rather hit and miss and your left with a game that just isn't that funny in my opinion. In fact, I'd probably rate this game a lot higher if I wasn't approaching this game from the perspective that it was meant to be a barrel of laughs from start to finish. As it stands, I really can't recommend "Danger Zone Friends" if your looking for a comedy game. On the other hand, I can recommend "Danger Zone Friends" if your looking for a turn-based RPG with moderately difficult combat.