Let me show you a curious and short mystery story!

Hey! Stop right there! I give you a warning: don't be deceived by the dragon in the menu! This is not a fantasy adventure, there will be no action and no combat at all. This is a short linear tale with dark and horror overtones.
Understood?
Ok then let's begin!

The Good
Firon is just a (boring) lazy kid that lives a normal life (but has cool bi-coloured anime hair!). If you expect that he will soon step into a fantasy world through some kind of magical portal... well no, this won't happen. For the most part the game is about reading and walking, walking and reading, and while this may be boring for some people, the pacing of the story is good and I was always wondering what was going to happen next.

But the real interesting thing were the graphics chosen, that for the most part I think are custom (well I'm not sure but so I think since I've never seen them used before). I liked the style used for a change, and some portraits, especially Kage and Jaro, are really good, they also in some cases have different expressions.
Mapping is quite good too: the city is little but colorful and nice, I had no problem finding my next destination, and I like how you can cross the street only on the pedestrian crossing (even if in cutscenes this does not happen!). 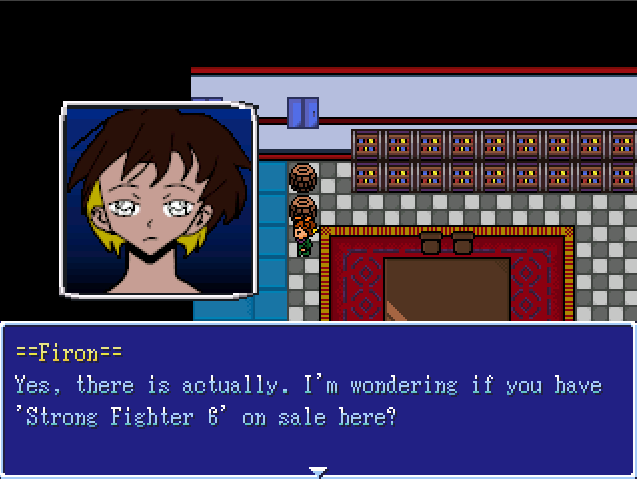 Ok, so if you like that kind of games, Firon is clearly NOT the game for you!

The Bad
There are a couple of typos like "difinitely" (and also the use of "brang" instead of "brought", but this isn't an error), some discutible choices like the text that in the prologue overlaps the map and is a bit difficult to read. Otherwise there's not much to say. The game is rather simple and linear (maybe too linear as there are no choices at all, not even meaningless dialogues or useless flavour options, and interaction is very limited).

Another "bad thing" in my opinion is that, while the story has an ending, it leaves a lot of matters unresolved (in fact it's clearly stated: "end of part 1"). The ending is a cliffhanger that left me wanting for more. Re-thinking to the final part, I think it's a bit too quick and abrupt, not because there's lack of details, but because too much happens and too many things are mentioned in the ending (some things were in my opinion a bit too predictable, as there were some clear hints, but... yes, the story is everything but finished), and all these things happen so fast, leaving a sense of incompleteness.

I also found the protagonist the less interesting character, as he is quite boring and predictable. He also has an ugly charset and faceset, but hey, he's not a cool boy at all! So I guess this is ok. 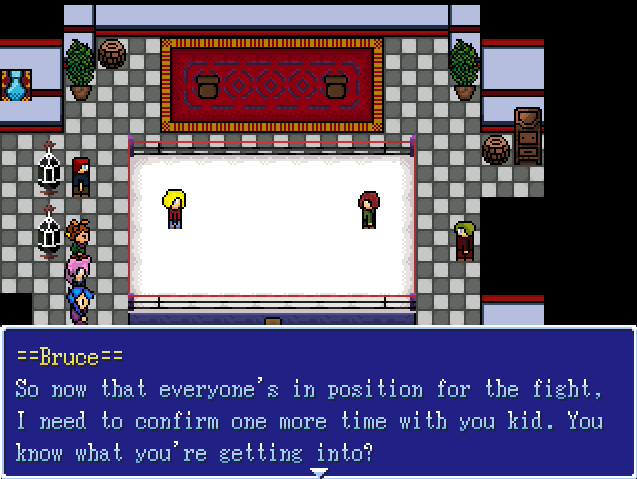 Guess what? The answer is NO! He doesn't know...

Verdict
Firon is a sort of linear visual novel, since there's no combat, no lines to choose, no equipment or items to find (even if you sometimes have a party of characters, the options about party management are there but totally useless). No, you just wander around and watch cutscenes, even if you can also talk with random strangers, if you want additional dialogues. The only items you have is a sort of report that describes the main characters of the story and is update during the game.
The whole experience lasts for about a couple of hours, but despite its limits and simplicity (absence of replayability and the linearity), I enjoyed the mystery story that was told, or better shown, during the course of the game. I also appreciated the unique graphic style, that while could be somewhat improved in my opinion for what regards the characters, it's quite pleasant for the maps.

In the end this is a nice little game of mystery, hope that it will be followed by a sequel that explains all the things left unresolved (and some events that made no sense, considering the role and behaviour of some characters).
It gets a 3/5 for me, especially due to the idea and realization. Something could have been better, but there are no bugs, errors or problems. Game is linear and simple but I finished it in a single sitting, so I guess I was not bored or annoyed, even if once finished I do not think I'd play it again, of course.
But this wasn't a too bad experience at all!