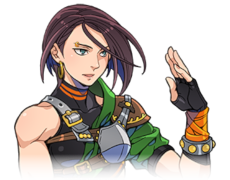 ERINA, the Martial Artist
“This has never been about saving the world, Juneau. Not for me."
Age: 27
Home: Melete Abbey, in the northern Holy Illusen Empire
Religion: Music, but not really a church-goer
Favorite Meal: Red meat, nothing fancy
Song: The Strumbellas’ “Rhinestone”

Bearing the weight of knowing why the world is collapsing would be too much for most anybody, yet Erina feels it even more deeply. After Erina’s mother died birthing her sister, her father dedicated himself to his research in a dangerously manic fashion. Now, he threatens the entirety of Gaia with his mad experiments.

Erina is quiet, observant, and penitent. She has spent her adult life training at Melete Abbey, finding a new father figure in Claude, an otherwise solitary martial artist living there. The past decade has allowed her to at least partially heal the wounds of a broken childhood, though a rash and uncouth side tends to emerge when Erina encounters her father or sister.

Erina believes that the Purifier is necessary to stop her father’s plans, and thus seeks Juneau out despite the dangers of travel even within the Empire. Whether or not Erina can handle Juneau herself, however, is the real question.

In battle, Erina focuses on stringing together combos of moves. She cannot access certain attacks out of order, but she makes up for this by growing stronger as battle goes on. Erina’s reflexes also allow her to effectively counter more oafish foes, though her Health is low enough that she might not be an ideal tank. Some example skills:

Skullcrusher - Erina bashes a foes head in, possibly Stunning them if they have at least three debuffs.
Break the Pattern - Erina breaks her Martial Rhythm to suddenly unleash a devastating kick that knocks stat buffs off.
Rend the Veil - Erina strikes so quickly that she has doubled accuracy. Demons are Stunned and removed from Phaseshift.*
Gut Instinct - Erina has a 35% chance to counter physical attacks with a double-hit of her own. This increases to 70% if she dodged the attack.

*Phaseshift allows Demons to hide in another dimension between attacks.