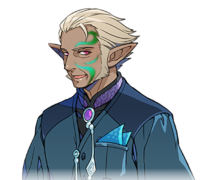 TAL'HN, the Emissary
“Things can change. You might even see Gaia in a pleasant light."
Age: 58
Home: Steppe Rose, in the south-eastern Drywild
Religion: Gaian
Favorite Meal: Herbal tea with nutcake
Song: Dispatch’s “Walk With You”

Each Purifier is sent an Emissary to aid them in the ways of the world and instruct them on their duties. With it being around a century since the last Purifer emerged, the ‘Hn lineage was morbidly unprepared for Juneau being chosen by Mother Gaia. It has only been two years since a terrible forest fire took the lives of most of the ‘Hn, leaving only Tal’hn and his nephew Gre’hn. And, to make matters more confusing, the previous Emissary -- Jul’hn, Tal’hn’s grandfather -- never returned, leaving his children to rule the elves of the Drywild without guidance.

And so, Gre’hn and Tal’hn made a deal. Tal’hn would heed Mother Gaia’s call to be Emissary, and the inexperienced Gre’hn would take the Maple Seat. Tal’hn’s personal reasoning was that saving the world is ultimately more important than the fate of the elves, and that Gre’hn would fail at either task that was given to him…

Rationality steers Tal’hn, though he often keeps his judgments to himself. He knows that he is inherently lonely, what with losing his partner, parents, and children overnight, but is determined to fill that void with Juneau and their shared task. Much to his chagrin, then, is her capricious and willful nature. Tal’hn hopes to shape that strong will into a potent force of Purification. In success or failure, he will do what he can for Juneau and Mother Gaia.

In battle, Tal’hn has the highest Power in the game, allowing him to excel at punishing foes with Primal and Storm spells. He does have a defensive side and can provide some healing, which is very rare outside of items in Greenlands. If you let him keep himself alive, Tal’hn will bear his full force against he and Juneau’s foes!