Blade of Acrimony: Wish of the West 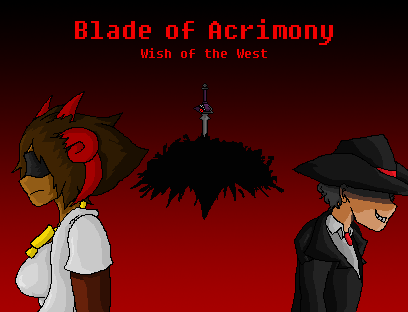 “Blade of Acrimony: Wish of the West” is a prequel to Blade of Acrimony that takes place in the wild west. Follow Anaya and Leonard as they try to seal away the Wishing Sword once and for all!

Blade of Acrimony: Wish of the West, like it's predecessor, uses a turn based battle system, but now it's been refined into something even better than before.

If you're not okay with viewing the following things, you may not enjoy this game.
-Religious Undertones.
-Non Realistic Blood.
-A Very Small amount of Pixel Gore.

As if written by faith itself, the sinister blade is found once again by a little girl named Anaya, daughter of the her villages High Chief. The blade tricks her into becoming his newest puppet, but it's short lived, as the Chief seals him away.

The seal is broken, the demon is loose. Chaos consumes the once peaceful village, as a child runs rampant, devouring souls left and right!
At the cost of her sight, the demon is contained, but will she ever be free?

Years pass, and our two unlikely heroes meet, one, a cursed girl who only wishes for peace, and an assassin boy, who yearns for true justice, forever out of his reach.

There's now an itch.io page for Wish of the West, with a windows and mac version download.
I have also removed the other download link, because it was not needed anymore.

This version of the demo is also less buggy, and has more stuff in it. It's an overall upgrade.