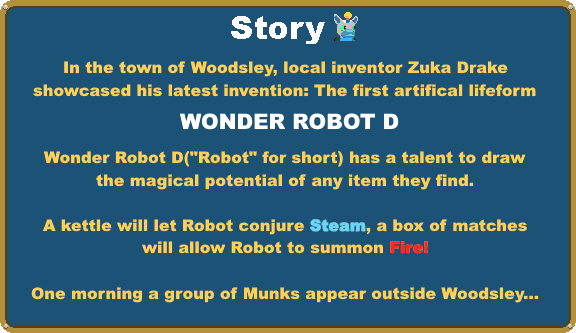 Wonder Robot D is a RPG featuring a battle system where Robot's current skills are determined by the items you've equipped to them.

You’ll also need to navigate Robot through the game's overworld. Use rubber plants to catapult across gaps! Escape from gigantic creatures! Swing giant turtles by their tail!

I plan on doing some updates to Wonder Robot D over the coming months before I move onto new projects(Follow me on Twitter if you're interested).

I would love to hear both what people liked about Wonder Robot D and didn’t so I can make it and any future games better.

If you leave a review, or have a youtuber to review or play give me a heads up about it (via a PM). In future versions of Wonder Robot D I’ll make sure to add you in the special thanks on the credits. (I’ll honour this up to August 2020)

Thank you for reading this far! I hope you enjoy Wonder Robot D

I've now completed Wonder Robot D version 1.02. These changes are based on feedback that I received and TheGameDawg's playthrough(check it out in the Media section).

I've added a description of the Spell equipment grant while equipped. This way on the equipment screen you can tell what a spell will do. This should streamline building your skill set.


The biggest change is a nerf to Ice Javelin. This is gained from one of the games optional Super Bosses. It was meant to be cost effect, but it surprised me! It was too cost effective and ended up the best spell to use aganst almost every enemy and boss.

I've slightly increased the energy cost and gave it reduces Spirit(TP). Spirit spells are the best way to restore enrgy. It's still powerful and cost effective but spamming it will hinder your ability to restore energy in longer fights.


I've changed the boss Tollem. his battle was supposed to push the player into running away and paying a toll. But if the player tried to fight on it would end up in a tedious loop where Tollem restores HP and deals damage with Victory Bolt. He now uses the more powerful Lightning Spell alongside the buffed Half. Now if you play aggressively he can be defeated quickly.

I introduced a new spell Stunner in the past but it didn't really have representation on an enemy. So Smogatha now uses a more powerful variant.

On a related note I'm currently working on a new prototype RPG in Gamemaker 2. If you follow my Twitter you might have seen a screenshot. I'll be posting a project page sometime this year.

author=teemoor
So is it a demo or a full game?
I get contradicting messages here :D

Heh, well back in April it was the demo. Now it's the full game.
DungeonDevDude

author=DungeonDevDude
Congrats on the release! I’ll be checking this out soon!

Thanks, hope you enjoy playing it.
Pages: 1