I've now completed Wonder Robot D version 1.02. These changes are based on feedback that I received and TheGameDawg's playthrough(check it out in the Media section).

I've added a description of the Spell equipment grant while equipped. This way on the equipment screen you can tell what a spell will do. This should streamline building your skill set.


The biggest change is a nerf to Ice Javelin. This is gained from one of the games optional Super Bosses. It was meant to be cost effect, but it surprised me! It was too cost effective and ended up the best spell to use aganst almost every enemy and boss.

I've slightly increased the energy cost and gave it reduces Spirit(TP). Spirit spells are the best way to restore enrgy. It's still powerful and cost effective but spamming it will hinder your ability to restore energy in longer fights.


I've changed the boss Tollem. his battle was supposed to push the player into running away and paying a toll. But if the player tried to fight on it would end up in a tedious loop where Tollem restores HP and deals damage with Victory Bolt. He now uses the more powerful Lightning Spell alongside the buffed Half. Now if you play aggressively he can be defeated quickly.

I introduced a new spell Stunner in the past but it didn't really have representation on an enemy. So Smogatha now uses a more powerful variant.

On a related note I'm currently working on a new prototype RPG in Gamemaker 2. If you follow my Twitter you might have seen a screenshot. I'll be posting a project page sometime this year.

A different kind of Progression!


Welcome again to Wonder Robot D’s blog. Where I’ll talk about my inspiration behind designing the games systems.

This time I’m looking at Wonder Robot D’s unique progression system and the things I did to try and make sure players would engage with the system.

A Unique way to progress
When you think gameplay in the turn-based RPG, you think of the battles and levelling up to gain more powerful skills/spells. In Wonder Robot D level up increasing HP and energy used to cast spells.

The way you gain spells is Like FF7's Materia or Paper Mario's badge system. Your skills are determined by equipped items. Unequip the item and you can't use the spell anymore.

This adds a bit of strategy to your skill choices since you can only bring some of your skills/spells to a battle.

Making Items feel like a Level Up
Every item is basically a new magic spell for Robot to wield, so it’s important each item gained feels significant.
• Hidden in the environment
• Story Events
• Bought from shops
• Boss Battles
• Behind mandatory encounters

An exception starting area's items are relatively easy to obtain. I wanted the player to have access to lots of spells first so they could experiment with set-ups and adjusting skill sets to counter certain enemies.

I was wondering which kind of skill/spell systems people prefer in RPGs?

This is the next blog on Wonder Robot D's game design. If you’ve missed the first one on the battle system you can check it out here:
blog 1 - Balanced Combat with distinct spells

This entry is about the principle form follows function and how it helped me design Wonder Robot D.

Form follows function
This principle comes from industrial design and means making sure the design of an object matches it function or purpose. e.g. A traffic light displays a green man walking or a red man standing still, this is a design that fulfils the purpose of telling you when it's safe to cross.

I wanted to apply concepts like this to my own game design.

No main character design!
When I first started planning I didn’t even have a concept of what the main character would look like! My idea wasn’t even “A game about a robot and demons”.

It was a concept, a RPG where the main character abilities would be based on items they’ve equipped. I wanted something like adventure games where problems would be solved with weird or everyday items, and to bring these ideas to a RPG battle system.

A Design from Science!
Much like Science harnesses elements in the natural world to create energy. I thought a machine would be good in a world where magic is natural and thus…Wonder Robot D. 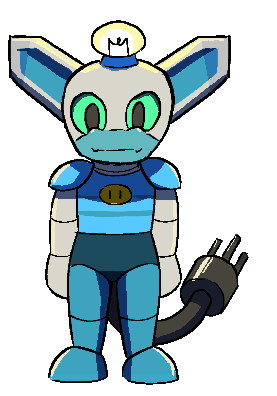 I drew some inspiration from Chibi-Robo and Guz from Chocobo’s Dungeon 2 and came up with a cute and heroic design! See if you can spot what elements I used from each character. 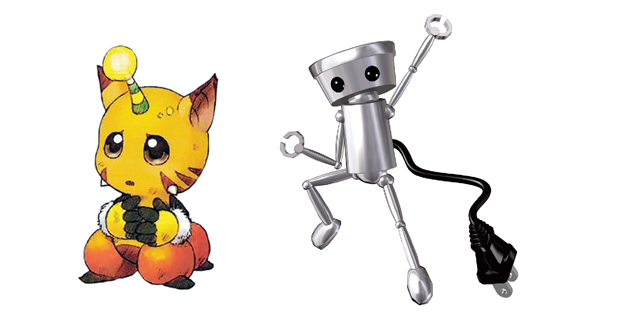 Applying it to gameplay and story
I designed the rest of the game around how each item/spell could be used in battle. The narrative was designed around the ideas of why Robot would be built and what kind of conflicts could occur as a result.

In game you'll see differences in how certain characters react to Robot: Some initially doubt Robot’s abilities, some fearful and others awestruck. Robot eventually proves themselves, causing a shift in opinion as the plot develops.

Later parts of the game include greater conflict unfolding stages of the story and how Robot’s abilities tie into the resolution.

To Conclude
Form Follows function as way of designing a game is a great way to keep a game focused and develop not only character designs, but gameplay and plot ideas around the key mechanics.

Please give Wonder Robot D a try to see it in action!

(Form follows Function concepts had also been cited as being used for how Splatoon developed their characters and the way Nintendo designs Mario games. Nintendo’s Shigeru Miyamoto studied Industrial design, perhaps that’s where the idea to apply form from function in videogames originated.)

Following the release of Wonder Robot D I’ve decided to write a few blogs about the concepts I used to design the game. I'd like to share how I’ve applied these concepts when creating the game.

This time I’ll talk a bit about the spells for battle and how I balanced the game to make sure each spell has a chance to shine.

Balanced Combat with Distinct Spells
Having played a fair few RPGs. One thing that I think goes underdeveloped is the distinction between different skills and spells. In some games you’ll find you have Fire, Thunder, Ice, Water attack spells. But the only difference between each one is the element...

One of the aspects I wanted to focus on in Wonder Robot D was making spells distinct. I wanted to make it so the player feels each spell meaningfully expands your options and to create battles were each spell can shine.

Amongst the first spells you receive is Bubble Spray. A water spell 2 Power which attacks 4 random enemies. It only costs 5 energy which is one of the cheapest costs for a move that can do 8 damage:


If there’s a foe’s defence is 0 or reduced to 0 Bubble Spray is at its best!

However an enemy only needs 1 defence to half the damage, 2 defence to nullify it. Plus if there more than 1 enemy in an encounter you can’t control how the damage is spread.

By thinking about the base mechanics and maths of each move. You can create situational skills where even before factors like elemental weaknesses are taken into account the player will consider their potential offensive/defensive options.

I found a simple way to balance this was to think about what kind of battles and enemies could be most effectively beaten by specific spell. To make a spell like Bubble Spray effective I knew tha as the game progressed there would still need to be enemies and bosses who have 0 DEF. Like-wise to make other spells such as ones which ignore defense useful I'd have enemies with higher defense and low HP.


The power of the standard attack command is 3 regardless of level. This was used as a basis of what the spells were balanced around. A spell which costs energy will either be stronger than the standard attack of 3 or will have an additional effect.

Give Wonder Robot D a shot if you want to play a game with a balanced spell system.

After 1 year and 4 months of development I am happy to say Wonder Robot D is complete and available for download!

To mark the release of the game I’ve put together a new trailer showcasing the exciting events of Act 2 onwards(warning some spoilers):


It’s been quite an experience, this being my first serious project and with custom assets. The initial planning, trial and error, making mistakes and correcting them were all big parts of the process. I feel I’ve learnt a lot about game design and pixel art from this.

Through gradual improvement I feel I’ve made a game that I can be proud of. One hopefully many can enjoy playing.

I like to thank those who showed interest in the demo. I’m very grateful for your continued support.

Thank you for reading. I hope you all enjoy Wonder Robot D!

As always I've been working hard at finishing Wonder Robot D. Back in June said that I felt like I was on track to complete the game earlier than the estimate of the 1st of September 2019.

I'm happy to announce that this is the case and I am planning on releasing the game quite soon...the 2nd of August to be exact. Up until then I'll be polishing the last little bits of the game and playtesting the final release.

I'll make a new announcement once the game is out with a release trailer. You'll be able to download the full game here for free in addition to itch.io

The demo is now up to 65 downloads between here and itch.io which is beyond what I'd expect so soon for my first game. Thank you for your continued support, I hope everyone is looking forward to the full game!

I've been continuing to work at hard at making Wonder Robot D. It's quite close to completion now, pretty much reaching the home stretch.

Originally I set the game as commercial and was considering charging a small amount for the final release. However I decided I'd like as many people as people to enjoy the game as possible.

To summarise the new pricing strategy:

This means you'll be able to download the full game here once it's complete!

It's on track to being complete earlier than my target of 1st September 2019. But I'll announce the date once I can say for sure.

In addition I'd like to thank everyone for their support and interest. Between here and itch.io the demo has been downloaded over 50 times.

That's all for now. Thanks for Reading!

It's been about a month since I've released the demo, so just giving a heads up on the progress. Wonder Robot D's development is progressing quite smoothly that I'm confident in the estimated release data of 1st September 2019 at my current rate provided no major changes in circumstances.

An estimate of completedness each element of the game as:


I'm now in the phase of focusing on polishing and fleshing out the game. Most of the work left is expanding/adding or redesigning rooms, battles, mechanics etc. in existing areas in the full game.

The full game will be three acts and the demo covers Act 1. Act 2 is content complete and my main focus is finishing up the content in Act 3 and then polishing/testing Act 2 and Act 3 to fix bugs before the release.

That's all for now. Thanks for reading!

I'm continuing to work hard at making Wonder Robot D. Today I'd like to announce the release of the first update to the Demo. Version 1.01.

This version includes new easter themed content and some bugfixes based on feedback!

That's all for now. Keep checking here for regular updates on Wonder Robot D's progress and have a nice Easter!