Blessed be the Lady

Desperately in need of a fast forward button.

Blessed be the Lady is an action RPG/Gothic Novel hybrid, which is remarkably apt as the main premise appears to be a hybrid of Buffy the Vampire Slayer, in that Diana the main character is the only one of her kind and is born into each generation, and Marvel's Mutant universe as the people Diana hunts are the next stage of human evolution with an unfortunate penchant for the taste of the flesh of their genetically inferior brethren. Diana however has an advantage. Whilst she is, as are all guild members, one of these evolved humans, called defects within the game world, she is also a vessel for the goddess and an untainted; a condition which allows her to manifest a very small percentage of the power of this world's goddess and basically kick other defects to the curb and protect the normal human population from the ravages of her kin.

Joining her in this endeavour is Hecate, no not the ancient Greek Goddess of Magic, but another defect, one who has managed to train herself to live without the need for human flesh, though she still craves it. She metes out a fairly nasty form of justice to any other defects she finds, she gives them an option, swear off the murder of normal humans and she won't hunt them down and kill them, betray that promise and she'll make them self destruct an explosive pellet she made them swallow. That's a particularly nasty streak she's got going there, but then again it's pretty obvious that poetic justice is her method of sublimating her hunger.

In addition there is Demeter, once known as Devlin. Are you noticing a female empowerment via Greek goddess name theme going on here? If not you really failed to pay attention in your introduction to the classics class. There is one, but this particular character tips that on its head a little since he's a guy. He's also a vessel, a being capable of harbouring the essence of the nameless god; one imagines the counterpart to the equally unnamed goddess. This gives him the ability to abstain from the consumption of human flesh, or indeed consumption of anything at all without any penalty.

To round out the quartet is Astarte, the Hellenised name of the Sumerian Goddess of Love and War though in this case she's more on the War side of that equation, taking the place of the tank, she has no link to a god or goddess unlike Diana and Demeter nor does she seek to dole out justice like Hecate, she just likes to hit things, and she's fairly good at it.

Finally there is Michele, the token human, who is quite pathetically lovelorn after being taken under Diana's wing after she rescued him and his village was destroyed by defects as he watched.

As the game begins you are offered a choice as to difficulty, from Fae, the easy level to Deity, the extreme one, which does speak well of the possible replay value of the game. In addition a quite lovely piece of music is playing as the title and introductory theme, sourced, as are al the musical themes from newgrounds audio portal. All of the interesting themes used within the game are obviously chosen with care and consideration, from this gentle and haunting opening piece to the more strident and martial battle themes.

A tutorial is offered to outline the game-play mechanics and the option to skip or watch cut scenes is also available. However as this game bills itself as a visual novel, skipping any part of the story would be counter-intuitive so I'm not completely sure why that was added as an option, still if you are someone who prefers to simply dive into the action without any preamble, I could understand how that might appeal to your game playing style.

The tutorial also introduces the concept of the achievements within the game; you receive them as mission items for completing certain tasks, successfully navigating the tutorial being one of these tasks. The awarding of achievements is not something I have seen a great deal of in RPG maker games, though it is not completely unheard of, but it does tend to fall more into the other games within the casual gaming sphere, such as Hidden Object or Simulation type genres. Still it's a fun little addition and as with the difficulty level does speak to replay value. 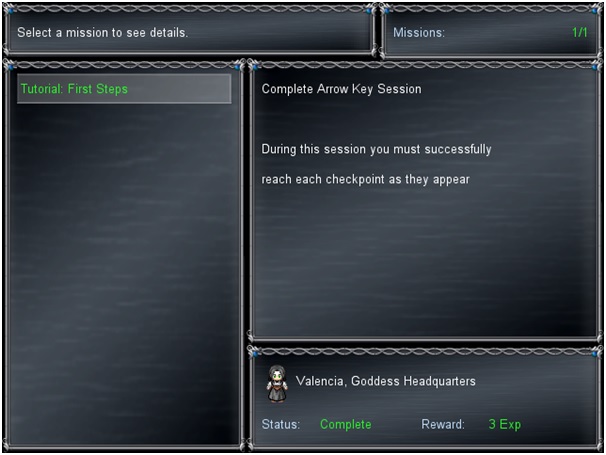 Missions earn both achievements and experience.

As the battle system is active on-screen there are a number of different skills to learn in the tutorial including numerous keyboard short-cuts and hot keys. In fact there are too many, with the requirement to link items or skills to numbers and then once selected activate them either with the A key for items or the S for spells, it would have been far simpler to have the same activation key for all actions, whether that is attacking which requires the Z key, item use or spell casting, the only action that would require a separate key should be guard, or defence as it is termed, this is activated by the D key. This overabundance of key usage is a hindrance to smooth battle sequences and makes them a great deal more difficult to accomplish, especially once the party grows to incorporate the other members of the group. This is unfortunately a major detraction from the enjoyment of the game.

Still once the tutorial is over and you have been introduced to one of your potential party members, a young man named Devlin who is requesting to take his Mother's place and position in the guild, an unheard of event in a female only establishment. However all is not as it seems with this young man, his connection to the other plane of existence is unprecedented, something not seen before in a male, and as such cannot be ignored. 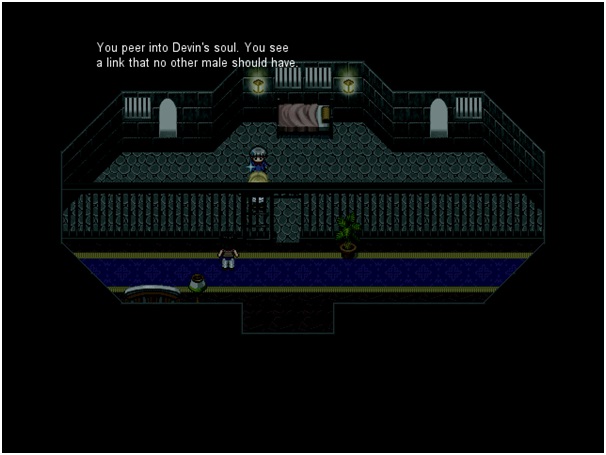 After this introduction the game shifts focus to an event that obviously takes place in the distant future, where an old man relates a story from his youth to his two young grandchildren, the story it appears of Diana and her quest and how they met. Basically she rescued him from the noose after he was caught stealing; a crime, like almost all others within the somewhat dystopian game-world of this story, punishable by death. It is only that his parent was a regular and generous benefactor of the guild that brought Diana to his rescue. A very pertinent example of it being not what you know, but who you know that saves you.

During the course of this little bracketing tale another game-play flaw is established, menu access is only available at save points and as assigning hotkeys is a menu only action, you can only change them when you are at a save point. Which does mean you need to possess some form of precognition to ascertain which of your skills or items you are going to need long before you run across the scenarios in which you are required to use them in order to have them available when you need them. Catch-22, anyone?

You can't even exit the game unless you are at a save point, other than resorting to the F12 crash button, that is. 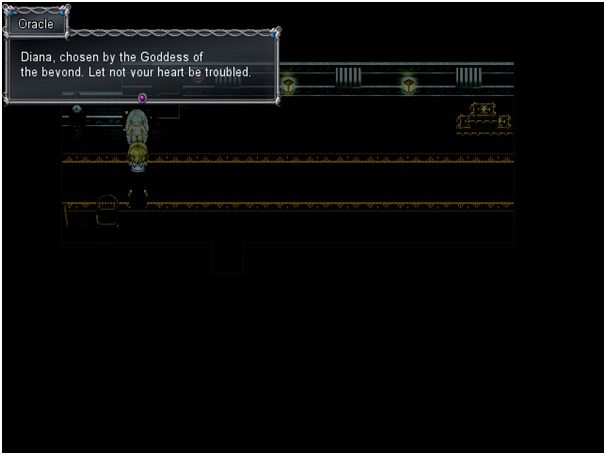 I would be helpful if the Save Oracle was a real Oracle, but alas, it is not to be.

The graphics are a mix of custom and default with some obviously hand-drawn character portraits and busts for the main party members and a few re-colours for a bit of variety. The majority of the game is played in gloomy places, barely lit building interiors, jails and darkened wooded paths where the predominant colour palette is shades of shadow.

The game is heavy on exposition as befits something that lists visual novel as one of its core categories, but the exposition isn't handled very well, and is quite monotonous and overly verbose, in addition the custom moving message boxes are truncated in almost every instance, and are delivered with depressingly slow speed that refuses to allow any player interaction to facilitate alacrity. I can understand now why one of the options is to skip the cut-scenes. They are tedious for the most part with a great deal of the information being delivered in one of the most long-winded ways possible. The problem being that if you do give into temptation and skip through the cut scenes the small nuggets of information you actually need to continue are lost.

In addition there are great many grammatical and spelling errors present in the character's speech and the occasional design error as well. 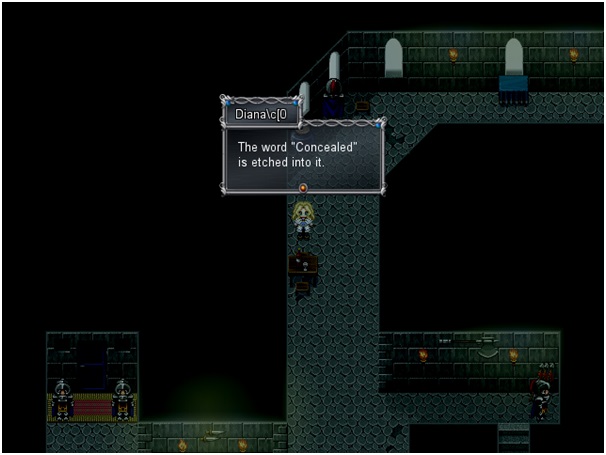 Shame the same couldn't be said for the script command.

It's obvious the designer has a flair for the use of music and mood, and just as obviously has an in-depth and interesting story to tell, but I think if they had spent a little more time on making the game user friendly and less time on the plethora of custom scripts for message boxes, 8 directional walking, custom menus, HUD's, hotkeys etc., this tale could have been a very worthwhile one, and well worth the time to explore the world both narratively and figuratively. But as it is the fact this is the 'Chapter Zero' is actually a bonus, it enables the player to see in just over an hour how difficult and finicky the controls can be, how ponderous and slow paced the bridging cut scenes and conversations are and indeed how much a waste of potential this game is as it currently stands.

If the designer did ever get around to completing this, and that is fairly unlikely as the last update was in 2011, then I wouldn't be tempted to continue unless the completion also included a major overhaul of the systems and dialogue. It would simply be too frustrating.