No Delivery is a procedurally generated CRPG, pizzeria simulator where you are the newest in a long line of employees for a local decrepit pizza parlor. Despite the rumors, shady history, and missing persons cases, you sign up for the night shift because it pays slightly more and all the kids’ birthday parties should have ended by then…

Luckily, it’ll just be a boring job in an empty pizzeria… right?

Play the demo now on itch.io!

Check out the trailer!

If you'd like to support development, get access to early builds + PSDs, and help keep the lights on, consider supporting me on Patreon or Ko-Fi 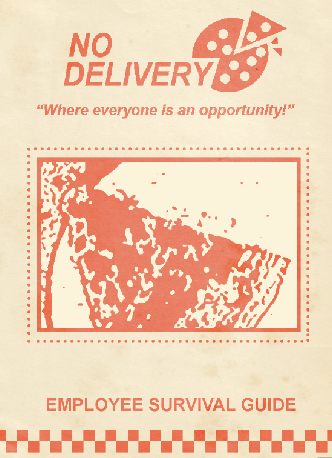 Everything you need to survive the pizzeria is here!
The Employee Survival Guide holds the collected knowledge of past employees and will serve as your guide during your time at the establishment!

Catch the update on itchio!

Comes as part of your purchase of the No Delivery base game, the Employee Survival Guide is a general, early-game strategy guide for beginners or newcomers to the roguelike genre. 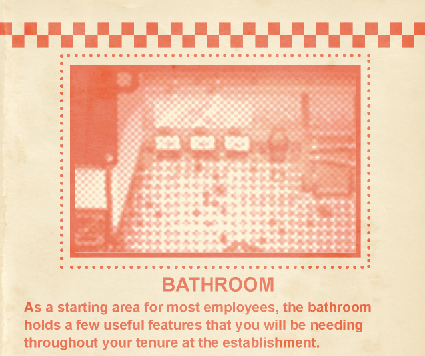 Entertainment for the kids!

I'm playing random "horror" RPG Maker games throughout October and just took a stab at the demo for this game. Really enjoyed myself!

author=UPRC
Why are there so few comments on this game page? This game is absolutely wonderful!

I'm playing random "horror" RPG Maker games throughout October and just took a stab at the demo for this game. Really enjoyed myself!


Thanks for posting here!
The page on itchio is really the main outlet for this project, though I did start out here with earlier games!
LordBlueRouge

Close
11/22/2019 04:48 PM
...I already mentioned this on RMN's discord about a month ago, But I wanted to share my thoughts here:
No Delivery is by far the weirdest, but surprisingly addicting, most trippiest game I've played of 2019.

I think I spent the better part of the day, just trying to beat the demo because
I was so addicted to it - it's just like one of those games where, once you understand
how it works, you sink hours into to it, in order to figure out how to beat it.

The game kind of plays like, if Silent Hill, met the Mach Pizza Guy from Earthbound,
who then decided to play Blizzard's Diablo together. You play as a manager, of a fast food
pizza restaurant, who hires various characters of different strengths and abilities to handle the night shift:

You have a Delivery Boy, a Mascot, a Waitress and a Security Guard.
One character, is selected at random for you. But if you don't like this character,
you can hire a new character for $50.00 later on, and if you're lucky
you can also temporary recruit new members while you're out on missions.

This game is hard. You can't level up and you can't buy better equipment.
So I died a lot during my first playthrough, while trying to figure this out.
There are also a lot of instant deaths you'll want to avoid that can happen in the first level.
But without giving too much away, how the game works is:

You start out as one of these characters, selected at random for you.
From there, you have to figure out how to carefully navigate from the Restroom
to the Lobby. Once you gain access to the Lobby, you can start to safely go on
missions or "Wrong Turns" as the game puts it, discoverable mission hot spots,
located throughout Stezzoni's Pizzeria - These are usually 4, 8 or 12 randomly
generated map levels, that are quite difficult to complete. But upon completing one of
these missions is where the real fun of No Delivery begins. the game switches
over to the day shift, where they throw you into a series of scenarios and situations
while managing the restauarant or amusement park attraction venue:

A Kid spills his soft drink all over the floor,
do you clean it up? or do you put a wet floor sign over it?

Customers complain about the trash cans being too full and want you to accept their trash right now!
Do you Refuse? Apologize or Leave the Trash out Back?

Answering these questions correctly will reward you with more money
and more items, which you can then use to complete further missions.
Figuring out how each item works, and when to use which item, and
when to trade each item is part of the challenge of No Delivery - It's
like a Survival Horror game, but with an economy, where you can actually
trade the items you hoard. And this is what makes the game so incredibly addicting.
You'll find yourself gathering dishes and pieces of trashes, just to take down the
more difficult monsters that are waiting for you at the end of each venue.

What I really like about this game however - it's not a scary game - but I like how
it takes the mundane settings of a pizza restaurant and amusement park attractions
and turns them into wildly unsettling things. You'll have to play it to see what I'm talking about.
And very similar to Silent Hill, there's no real explanation for these bizarre happenings,
you just have to sort of, survive.

I think the coolest part is like, The 2nd Stage, where you have to go through
an arcade themed dungeon, but each monster you run into, is an arcade machine
based on a universal movie monster? So like, you run into Dracula, but the game
has a brief excerpt about the film, Dracula, before you have to fight it - very cool, really well done!

If you liked Earthbound and Silent Hill, definitely check this one out.
Very easy nominations for (Trippiest Game) and (The Dark Souls of RMN) here.
Really neat surprise of a game, for 2019. I loved it!

Also, be sure to check out their late 90s website. - This was really cool!
AtiyaTheSeeker

author=AtiyaTheSeeker
I swear, this game feels like One Night at the Steeze but all grown up. I'm *so* playing this in the coming days. :D

author=LordBlueRouge
...I already mentioned this on RMN's discord about a month ago, But I wanted to share my thoughts here:
No Delivery is by far the weirdest, but surprisingly addicting, most trippiest game I've played of 2019.

If you liked Earthbound and Silent Hill, definitely check this one out.
Very easy nominations for (Trippiest Game) and (The Dark Souls of RMN) here.
Really neat surprise of a game, for 2019. I loved it!

Also, be sure to check out their late 90s website. - This was really cool!


Thanks for the recommendation!
I started with gamedev on this site so its awesome that its being discussed here!
Pages: 1