"Finding A Heart" is a game made for the "A Rainbow of Positivity" Event, as such it had to include LGBTQ+ themes/characters/plot in some form, and was further specified to have a positive note, ending or direction. As such it is very short, as it had been made under strict time limits. You may complete it in a few minutes. 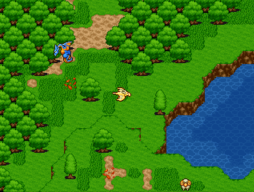 
While its idea is simple and has a lot of potential (Zyrmuk's, a gay dragon's quest for love in a simplified, but more 'race survival' driven dragon society), the game's core gameplay loop is repetitive, while the dialogue is too short and barebones to be truly engaging when set against the gameplay. Add to this the music being a bit too drab as well with the first half of the game having no music whatsoever, and you are left with no real major selling point beyond the premise.

One might find a core idea of responsibility towards family and expectations here - one that might resonate with a lot of people whose parents or other groups of people keep asking them to marry etc. The execution is that you are the (dragon) king of your people, tasked with their survival while caring for their brood (via providing food). That you seem to have a large group of other dragons flying with you to get food, and whether they could provide for them all is never explored.
This society however, is extremely one-dimensional - the only dialogue options with them include their happiness to raise brood, the importance of raising brood, and how fulfilling it is to follow 'nature's obligation' of continuing the dragon race (aka survival). For this you may question the need for men alone to shoulder this burden in a dragon society, but this is creative freedom, and it adds more relation to how one might perceive human society regarding the topic of homosexuality, or really any relationship kind that falls outside the norms of "make grandchildren". Your character is interested in such a relationship not just because he sees no purpose in this mating process alone, but wishes for a true romance. The protagonist is different in that he is more nuanced and deeper as a character in general compared to everyone else in the nest.

The idea is that with this incredibly simplistic, boring, streamlined society, finding a mate who you actually love and can connect with would be akin to an oasis in the desert (it being a possibly male partner is not further explored, and need not be). This is mirrored in the music only starting once you have found "your heart" While somewhat true, this part of the dialogue is simplified as well, and the music adds to not let the atmosphere shift too much. The fact that story progression is strongly tied to repetitive gameplay as well, sadly added to finding your mate not feeling as sweet as it could have.

Gameplay follows a very simple pattern and tries to add to a natural progression in terms of relationship, and lifestyle depiction. You go out with the men to hunt, after which you return home to talk, after which you repeat the process. Following this logic, you have two main areas, your home and the outer world, which you switch between during flight cutscenes. The outer world is large and colorful, albeit it without much to interact with. You can find another dragon here who piques your interest and will eventually follow you home, and other than that you can fight on-map encounters to procure the food needed to continue the daily cycle.

Once you have invited a peculiar dragon home, you can repeat your daily routine with more conversations, until you have the decision to leave the nest and start your own life.

Now, the gameplay itself follows a purpose and well does work to demonstrate it, but lacking music drags it down, as well as the fact that you spend too much time with rote activities. (the flight cutscene is sweet, but all cutscenes add up quickly).

The writing is sweet, and what you play this game for. It is simple, with even a love for flowers being outlandish, but it works well. It has a bit of a drama-writing charm, that could well perform without any of the gameplay, but would have really benefited from more dialogue and writing to balance the gameplay/cut-scene time.

Your people speak only one line/box each which does not change throughout the game. It would have been lovely to have changing lines, and perhaps even add the conversation that your character refers to for the ending, but the player never gets to witness. What is it that the dragons see in their lifestyle? If they are so simplistic, are they as simplistic about other things (such as food)? - even that would have offered opportunities to demonstrate that simplicity in thinking with a variety of topics. You could've asked them about flowers and get bewildered responses back, for example.

It's a sweet, fully functional story in the package of a fairly dull game, gameplay-wise. I'd have preferred a music change, rather than no music for the first half of it, and would have loved to have a bit more varied dialogue (both within the brood and with your beloved). As it is, it is a simple execution of a simple idea and while I can't really find major fault with it, it does end up just a bit uninteresting to play.