"Rosarum Boarding School" is a kinetic novel created by Fflo for The Rainbow of Positivity event. An event meant to show case the power and many colors of the rainbow. Though, I'll admit I feel a bit out of my depth when it comes to reviewing this project. While, I've covered a few books on my youtube channel such as Magic Pony Carousel #1: Sparkle the Circus Pony by Poppy Shire and Wellspring of Magic by Jan Fields. While this does mean I have some experience with reviewing books. I really wouldn't consider it a specialty of mine. After all, only 4 of my so far 7,118 youtube videos have been about books.

Story
Summary
You follow around Hugo and Arthur as they try to hide their relationship from the prying eyes of their fellow students. Of course, their efforts are quickly undermined by their inability to deny their burning passions. I suppose it's hard for such young, passionate loves to keep themselves under control for long, but their decision to screw in a locker before math class really comes to haunt them, but will this youthful indulgence be their doom or will it lead them down the path to salvation and recognition by their peers?

English
The game suffers from a few notable grammar errors. Though, I'll admit these mistakes may have been intentional on Fflo's part to a certain extent. After all, a notable number of the students at Rosarum Boarding School come from countries whose primary language ins't English. 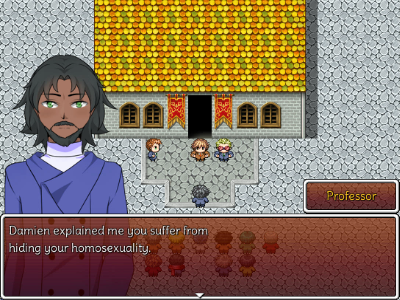 Moral
On the moral side of things I think "Rosarum Boarding School" is a bit weak. This isn't because I disagree with the game's final message about how people shouldn't be judged for their sexual orientation. So much as I feel I should be free to judge Arthur and Hugo for being rather foolish for having sex in a locker before class. A set of lockers just outside their classroom if the novel is anything to go by. And I'm not just assuming that the characters were screwing like monkeys in a public place. The game flat out tells the audience this is what Hugo and Arthur were doing. 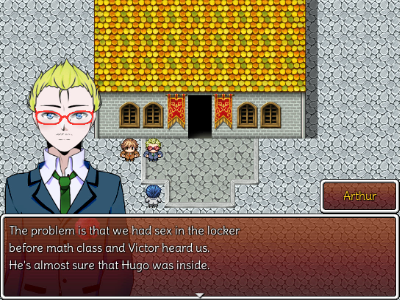 And while I personally don't give a damn about what people are doing in their own homes and whatnot. It's a lot harder to argue the school shouldn't punish Hugo and Arthur for engaging in such activities on school property. After all, were supposed to attend school in order to learn things, not to see how many times we can blow our load.

Oddly enough, "Rosarum Boarding School" does stand out in this category. Not because the soundtrack will rock your socks or take you on an emotional roller coaster ride from beginning to end, but because this kinetic novel is entirely devoid of background music. And while I realize this was probably a byproduct of the rushed nature of this project in order to get it out in time for the event. I can't help but feel like Fflo really dropped the ball here. After all, a nice background score can really add to the emotional weight of a scene.

On the graphical side of things the game is alright if a bit plain. Though, I suppose I really shouldn't be worrying about the lack of greenery on the school grounds when I'm supposed to be paying attention to the plight of our heroes.

"Rosarum Boarding School" is a kinetic novel that's easily outdone by games like "Luxaren Allure" and "You and I." in the writing department. I suppose many would argue those games are a bad comparison. After all, "Luxaren Allure" and "You and I." weren't developed under the constraints of a contest. As a result, the developer/developers had more time to flesh out the story and turn their projects into something special. While "Rosarum Boarding School" needed to be completed in a hurry while also meeting other criteria. Regardless, I really don't feel like this kinetic novel is worth a read, but to end on a more positive note the relationship between Hugo and Arthur feels far more real than the one we got between two of the playable characters in "Falling Leaves".