This time "really short" rhymes with "really worth"!

A little review for a little game
Ok, first thing please mind that this game is short, very short. Despite that you will find the same nice and witty dialogue of the first game, our three heroes, and some new foes.
Speaking about the heroes, I like how this sequel is more focused on Dave, that joined the two protagonists only during the final part of the first game. But I won't tell you more about that...

Combat is easy, puzzles are hard
...but to design, I meant! Well yes because in this game these two are both easy! And short. And nice to play, I think that the duration and difficulty is just right for a casual play. You will enjoy the dialogues without too much committment for what regards strategy and planning. And that's ok!

Combat is back with the usual funny dialogues and you can play without worrying too much about the difficulty. Anyway I liked how the charactes have different abilities and skills that are not limited to "just a stronger attack", they look different and play different too. 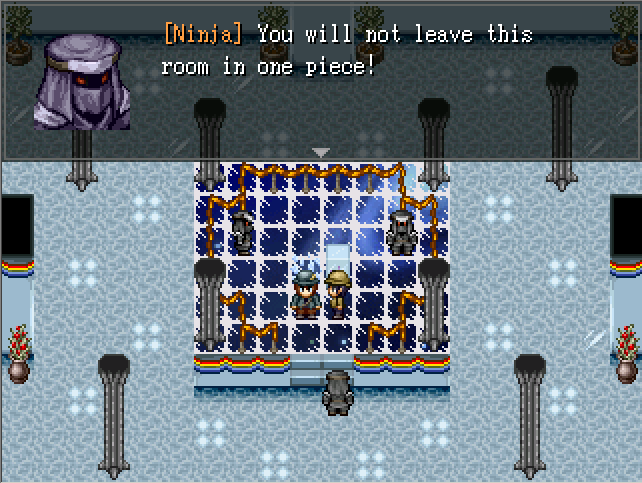 Then let's speak about mapping: this is what I liked a lot since there are many different enviroments, like the museum, the subway station, the warehouse, both inside and outside. And the choice of the chipsets and sprites is simply perfect, the maps may be few but each one is full of details and well done (and there's also the presence of rainbow flags to reference to the rainbow of positivity itself! Speaking of details...), they are by no means bare or empty, and even if there's no purpouse for these items, at least they look well done!
Oh and I liked a lot the use of light especially in the final part.

Music and sounds are ok, for the most part of the game nothing that stood out, and it's ok for me. What I liked very much was the piano part. Very good.

Characters and their facesets are from the usual source and merges well with the scenery. Nothing to say about that except that it's a style I like and fits both the setting and the style of this parody of the spy story.

Final Thoughs
This is a little nice adventure and sequel... and I'd surely like to see someday one more episode!
The story, the setting, everything fits perfectly as a sequel of the first Vindication game, so despite this being a short scenario, I think that it's perfect for its purpouse. I expected little from a short game, and I was surprised to find more than what I was expecting: quality and details!

author=pianotm
Thank you! I'm glad you enjoyed it!

Yep! This time I had no problems with the puzzles, and I liked the unfolding of the story. I just wished it was longer, so ok, consider this a merit!
lavendersiren

Close
08/03/2019 11:51 PM
Glad to hear you enjoyed our game. It was a lot shorter due to less time available to make in one month, but hopefully we get a chance to make a longer one next time.
Puzzles are easier this time because I ran out of hard puzzles I wanted them to be solvable entirely within game, as well as being on an action puzzle fix lately.

author=lavendersiren
hopefully we get a chance to make a longer one next time.

No worries, short one or long one, I'll be always happy to see a new episode and I hope you'll stick with Rmk2003. I'm nostalgic, I know.

author=lavendersiren
Puzzles are easier this time because I ran out of hard puzzles I wanted them to be solvable entirely within game, as well as being on an action puzzle fix lately.

As I wrote before, creating engaging combat and a compelling story is hard, but making good puzzles is harder! Most Rmk games I played and love are just combat and story, so haveing some kind of diversion or puzzle is a plus, especially for a short game like this one.
Pages: 1