The Heroes that Nobody Asked For

I'd Ask For Them, Actually

The Heroes That Nobody Asked For is a short RPG by Aegix_Drakan developed in RPG Maker 2000 for the Abrupt Ending Party event. When I read that is was an event game, I was expecting it to be a very short romp, but I was pleasantly surprised to find a sizable game behind the curtain and it's a jolly ol' time, indeed.

The game pits you as Wally, a cabbage farmer who wanders into a cave with a martial artist friend and finds a legendary sword of yore. Having become the chosen one, Wally is reluctant to actually carry out the duties of a hero, especially as the game progresses and it becomes increasingly clear to him and his entourage that perhaps this prophecy was a whole lot of phooey as every legendary crystal you "save" from supposedly evil monsters brings a new wave of destruction to Wally's world.

In other words, the story is a pretty typical "Hero is actually the villain" parody of the olden days of RPG Maker and if you're looking for a simple throwback of RPG Maker parody games this should get the job done just fine. It's not the most original idea, but there are a few good jokes and visual gags that are sure to make you chuckle. 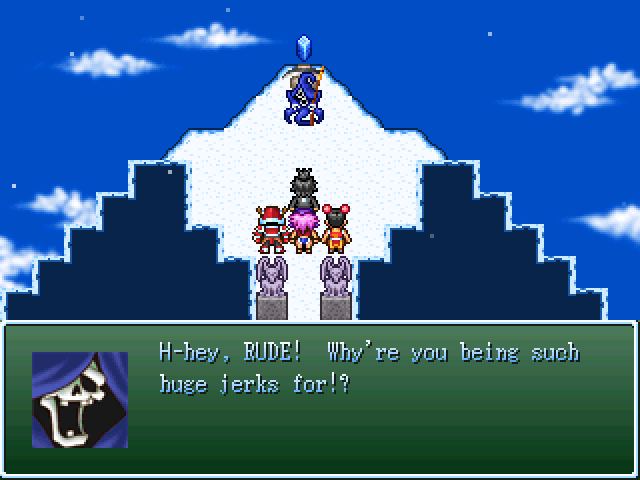 The game is built with the RM2000 RTP assets and maps are clean and functional. Dungeons are short and are about one map each, with a breezy encounter rate that emphasizes quality over quantity, and you can expect to be in a smaller number of tight battles rather than a bunch of more trivial ones.

Combat in The Heroes That Nobody Asked for uses the stock RPG Maker 2000 engine, with a few interesting twists. Characters don't level up at all, instead having to purchase upgrades solely through gear and items. Characters' MP regenerates over time in battle, and items refill back to their alloted amounts after each fight, so you can go hog-wild throw skills and spells around. And you'll need to do so liberally, with many fights being dependent on inflicting debuffs and keeping your foes from staying at their full strength. Everything seems to turn out okay balance-wise, though Wally himself starts with some lousy abilities compared to the rest of his group and unfortunately he doesn't seem to get all that much better as the game progresses.

By the end, my playtime clocked in at about an hour and that feels just about right for what the game is going for. I think any longer than that and it would've been a struggle to keep going, but the abrupt ending happens right about when it feels like it should. I also encountered no significant bugs other than some minor spelling errors, so you can expect to make it to the ending without any headaches.

If you've got an hour to spare, you certainly can't go wrong here. It's definitely familiar ground, but it's good old RPG Maker comfort food.

*sigh* No matter how much I proofread there's ALWAYS a few that manage to sneak through. :(
Pages: 1