the machine that BREATHES

0 reviews
the machine that BREATHES is a 2D Survival Horror game with a focus on situational combat and exploration. Inspired by the likes of Resident Evil and System Shock, you'll crawl through a hostile environment and manage a limited inventory to brace against the unknown.

You are digging deep underground. Your task is to scan for seismic activity and send it back to the above. Unexpectedly, your contact with the surface cuts out and you are left digging for eternity. Eventually things go dark and you're running out of power... is this where it ends? Suddenly you awaken in a strange new body, as you must have been recovered somehow. Strange thing is, the entire facility you're in is vacant, and you're definitely not on the surface.

So I anticipated writing this blog post to talk about the post-post demo festival. What happens after the big spike and what happens if you leave your demo out longer? Because I am only one data point there probably isn't going to be super illuminating info here, this is me more or less looking at some charts and wondering out loud.

The Steam Next Fest has everyone put out their demo for a limited time, but optionally you can just leave it out way past the festival. Circumstantially I kept getting requests to localize and translate the demo, which led me to extend the demo's availability each time. The biggest thing that happened though as a result of leaving the demo out longer were these two videos. AlphaBetaGamer released a playthrough of the demo totaling 100k views and ManlyBadassHero then likely saw that and made a playthrough that shot up to 150k views to a combined total of 250k (assuming there isn't crossover). That's a lot! And the spikes were just as high as the demo festival. Not only that but the game did rather well compared to the surrounding videos against even ones that came later. I definitely think the power of it lies in the thumbnail. When making a cover for your game it's not just a way to make your gamepage alluring it also gives youtubers something to latch onto and entice their own audience as well. It tells me there's a symbiotic relationship here when it comes to being organically selected by youtube channels. Help them help you.

Another factor in the youtube blow up is that I think I was just... around for a while. AlphaBetaGamer sounded familiar to me, and I realized they had actually covered Nemoral several years back. So maybe they didn't even need to discover me via the demo festival, and were familiar with who I was beforehand. I also could have sworn this channel had way less views back when Nemoral was covered but now it's a huge powerhouse. Just about everyone that came to me for collaboration or oppurtunities found me through this one video. I guess the takeaway here is that it helps to just be around and be consistent with your genre or branding. You never know who's following you.

Speaking of branding: I advertised on the Blame! subreddit. It's a community centered around a manga that greatly inspired this game. This amounted to about 10k views (on the tail end of AlphaBetaGamer, so hard to know how much it actually contributed). It can be hard to do self promo on Reddit because some subreddits don't allow it in the rules. This particular one is very chill and niche, and generally has posts that have "Nihei vibes." I was very specific (and honest) in my title and just posted the trailer (and only posted the Steam page url when asked). The response was super positive and I've seem to hit the exact value proposition people have been looking for. Definitely going to look into other (self promo friendly) subreddits. I also really need to get back into TikTok.

I've also been spending the past month translating this demo into 6 whole languages with 6 or so other contributors. The experience has made me very used to the process of updating the game and making sure everything is rock solid when it comes time to translate the full game on release. It also made me aware of how to budget the final word count and by extent wrap up the story. More importantly, knowing that I have people lined up for translations and being able to advertise that the game will definately be in these languages on the Steam page will help with the long term marketing. 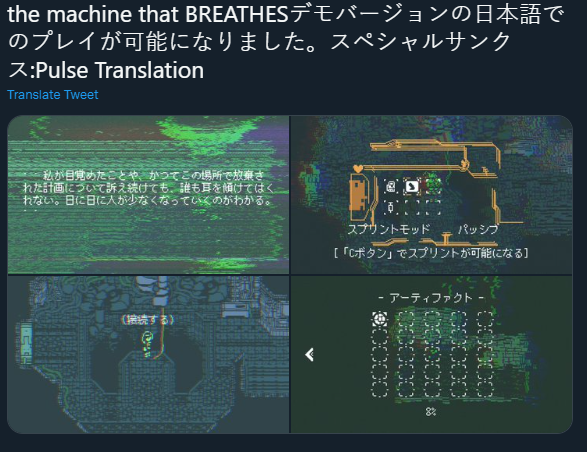 I keep announcing new languages for the demo, I hope it's not annoying! A lot of questions I get asked are "When's the game coming out?" I imagine followers or would-be customers could care less about the free demo being translated in yet another language. But I imagine there are non-english speakers who follow the game and have been anticipating a language release would also be excited that a slice of the game is now playable.

For the past week or so I've been getting about 50-100 page hits and 20 wishlists per day. This was a far cry from the 5 page hits and 0-1 wishlists I was getting before the festival. There was a huge slump where I just wasn't really marketing the game much which probably means I shouldn't let it slip anymore. The demo festival has had a huge cumulative after effect on the game's reception. It's hard to say for sure but a lot of the sustained page hits seem to come from within Steam, so a lot of outside interest has likely fueled Steam's holy algorithm.

Even with all this success and opportunities that have suddenly lined up, I'm still not exactly confident on how well this game will do. Nearing almost 7k wishlists is great but when you get really realistic and pragamatic for a second, two 100-200k youtube videos converted to about... 5k gamepage hits, that's like a 0.01% conversion! Which then converted to 2k wishlists (which hey, not bad). It takes a lot to get people to even be interested, they say people are more likley to buy something if they see it in 3-4 different avenues. So I think my goal is to diversify and not rely on just one channel. I also need to grab more key art and promotional material that influencers can use instead of the same dang cover art over and over. So there's a lot to consider.

So that's it for this post, next I'll focus on getting this damn game done and elaborating on the progress.


@LordBlueRouge: Please don't use reaction images outside of the welp forums.

Great aesthetic, and I welcome the throwback to older-school ps1 survival horror.
Cap_H

Added to my Steam Wishlist and subscribed!
Momeka