It's what it says on the tin.

My Darling is a 10~ minutes long visual novel made in renpy about well.. your darling. And in case you missed the clue on the gamepage, it is not a simple happy romance, as the content warning gives it all away right away. The game itself isn't any more subtle about it, though. I played the English version which has been translated from French. It's alright!

My Darling adds some character portrait art to the general renpy backgrounds and uses them generally well (though I believe the backgrounds might custom as well, are they?). It features a dream hubby of the Japanese variety by the name of Takuya with his own custom art (cooking and cleaning for you while waiting to greet you after work? yup. that one). Said art works really well, especially for a shift later on which while anticipated by me was visually quite striking and effective. 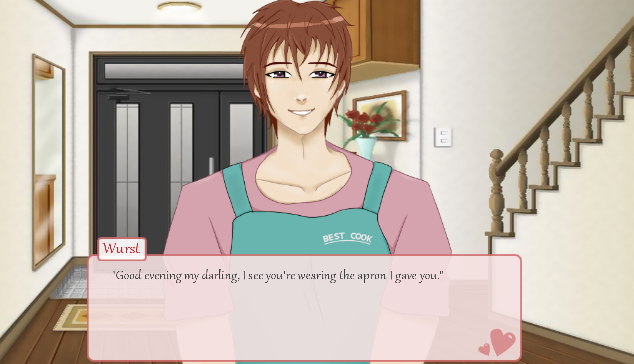 Yes, I named my protagonist Wurst.

The protagonist isn't ever shown which works well and also means gender is never specified or talked about, meaning you can insert whatever you feel is right, or yourself if you always wanted someone as doting as Takuya. Doing so might create a dissonance with the character though, as our protagonist is fairly trusting.

Your darling has problems, and so do you. The main feature is also the main issue here, as the game jumps in in a way that does not really show any sort of truly healthy or natural interaction. Takuya is easily upset and the flirtatious banter between the two main characters feels more of an attempt to convey the idea of mutual care, but doesn't actually succeed in portraying it. For one, Takuya blushes heavily and tells you to stop it after you compliment the apron he is wearing. You literally compliment an apron and it is treated as an incredibly embarrassing thing, when supposedly these two should have been together for 5 years already (it wasn't a compliment of the 'oh imagine you'd be wearing nothing but the apron' variety. Just the apron). The story tries to convey a dissonance between genuine sweet care and underlying nervousness and tension, and in doing so fails to ever establish a truly caring atmosphere, even for a moment.

So when Takuya feels off, the protagonist reports suffering from Amnesia (not the anime/story plot twist loss of identity kind), and being burdened with it, and it being a worry for both of them, and it is here Takuya offers some hugs and nice dinner - if there ever is a caring moment, it is this. While much more realistic in this depiction of amnesia (since identity loss usually doesn't occur), there are no examples given for this. Nothing. I'd be curious to get a tiny bit of insight into how amnesia affects their daily life! 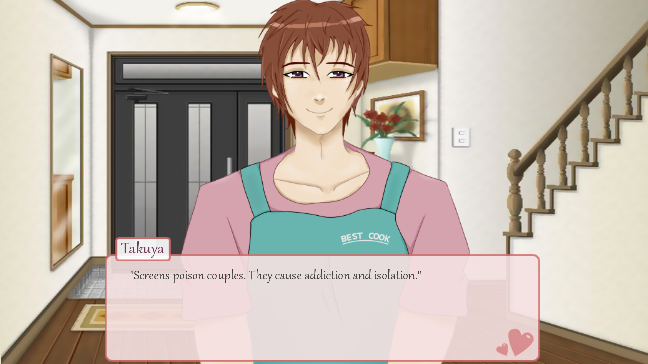 Try telling that people in a long-distance relationship.

Now, this write-up makes it feel very subtle, but from line 2 I had an inkling of what would happen, and while later on the plot does introduce another topic and issue that takes precedence, it does use all the information above to complete the picture, when I was hoping it would surprise me in some way. It didn't. I thought it might take another direction, but then it curved right back. This game doesn't have major surprise moments. You can see it miles away. The tropes are there. Does that make it bad? Not necessarily, if you are into the yandere stereotypes, which feels like a spoiler, but really it's obvious. There, I said it, you thought it all along anyway, didn't you? A romance that's just a little bit off...

Now then, while not surprising, the writing itself is clear-cut with a strong directive. The only downside is that the translation left its marks on the writing. There are numerous stylistic errors that carry the basic meaning, but stylistically sound off and are so consistent that I can only see it as a result of the translation (they become more and more apparent over the course of the game). This means that the meaning is delivered, but a lot of flair must have been lost.

The game also offers you a number of choices along the way, which give different flavor to the basic adventure, and also convey the sense of helplessness of the protagonist. It is also this helplessness that drives the core story. They aren't making the best choices, and don't always succeed in what they attempt, but this actually feels really natural given the circumstances. There are sadly only two endings, a 'good' and a 'bad' ending that you get funneled into regardless of the majority of decisions, but they both convey what is going on quite well, and I liked especially the somber tone the 'good' ending used.

I struggle with rating this game (between 2 and 3 stars). It is a simple game, it doesn't try to be much more than it is, and it uses the basic idea relatively effectively. There are various bits that could've been expanded on, and the language could benefit from touch-ups. There is really only one visually change that really got me, though most people who enjoy yandere tropes would likely enjoy this simple story.

It's what it says on the tin. Let Takuya take care of you, it'll be fiiiiiiine.
If that sounds intriguing, go for it. If that sounds dull, it probably isn't for you.