1 reviews
A card game in the vein of Yu-Gi-Oh!, Vanguard, and MTG. Play it.

Discord to play with others: https://discord.gg/VXpWQRH

How to Play ChromaCore
V0.0.1
A Collectible Card Game by oddRABBIT

ChromaCore is a Collectible Card Game, or CCG. Each game is a duel between two players. You fight to send 5 of your opponent’s Cores to the Damage Zone. Establish Cores by playing them to the board. Station Natural Guardians of various species on top of those Cores. Stack Layered Guardians on top of these to increase Power and add extra effects. Fight struggles of Power to send your opponents’ Guardians to exile, and damage their Cores (hopefully permanently). Activate super strong Conditional Guardians by fulfilling their required condition, and let them wreak havoc on the battlefield. Play temporary Skills or permanent Domains and let your opponent suffer their dire effects. This is your fight, and you will not lose.

Channel the strength of your Cores, and win!

Show
To set up a game, each player must have a deck with 40-70 (inclusive) cards. You can have up to four (inclusive) of each unique card in a deck. Each deck must have 5-10 (inclusive) Cores, of which one must be a “Base” Core.

At the beginning of the game, each player places one selected “Base” Core in their middle Core Zone (CZ). (For an explanation of the Zones and what the board looks like, see Section 6.) A Conditional Guardian is placed face-down in the Conditional Zone (CON), if available.

Players then draw 5 cards. You can “Mulligan” once if needed, meaning that you have the option to reshuffle these 5 cards into your deck, and draw 5 new cards - but only once!

Decide who will play first. The first player cannot attack on their first turn.

A player wins if, during any Final Phase (see section 2), their opponent is the only player with 5 or more Cores in their Damage Zone (DMG). If both players do, then it is a draw. A player also wins if their opponent runs out of cards in their deck.

Show
Each game is made up of a series of rounds, and each round is made up of two turns, one for each player. Each turn comprises several phases, as follows:

1. Draw Phase
At this point, you can draw a card from your deck. You can also send one card from your hand to the Point Zone (PZ), though this is optional. If you do, draw one card. (For an explanation of the Zones and what the board looks like, see Section 6.)

3. Primary Phase
You can play cards and/or activate card effects.

4. Combat Phase
You can attack your opponent’s Guardians and/or Cores. Each Guardian can only attack once per turn unless specified by an effect.

Each time a Guardian attacks, the following steps occur:
Targeting Step: The attacking player declares which Guardian is attacking which Guardian.
Power (PWR) Calculation: Determine which Guardian has the higher PWR (or if it is a Core, whether the Core can be damaged) and send the correct card/s to the correct Zone/s.
Repeat the above process for each attack. Note that a Swift Effect may occur between steps 1 and 2 of the attacking process.

5. Secondary Phase
You can play cards and/or activate card effects.

6. Final Phase
End your turn. Your opponent begins their turn after the conclusion of this turn. If either player has five Cores in the Damage Zone (DMG) during this Phase, that player loses. If both do, then it is a draw.


3. What types of cards are there?

Show
The types of cards are as follows:

Core
Special cards that function as life. Guardians can be placed on top of Cores, in order to defend them. Some Cores have special effects. Also, Cores that are damaged are sent to the Damage Zone (DMG). (For an explanation of the Zones and what the board looks like, see Section 6.) You must always control at least one Core (If you do not for whatever reason, you must play one Core during your next Core Phase). Cores come in three colors - Red, Blue, and Yellow. Cores can only support Guardians of their own color.

Natural Guardian (NG)
Refers to a Guardian that is neither a Layered Guardian or a Conditional Guardian.

Layered Guardian (LG)
A type of Guardian that specifically states that it must be put on a Natural Guardian (NG) of a specific color. The NG beneath it gives a bonus to its Power (PWR), but can request that the NG beneath it be removed to the Point Zone (PZ) for the activation of its ability, which will negate the bonus. If a Layered Guardian (LG) is sent to the PZ, the NG beneath it is sent to the PZ alongside it. When a NG is mentioned in card text, this can also refer to LGs, but if a LG is mentioned in card text, this can only refer to LGs, not NGs.

Conditional Guardian (CG)
A type of Guardian that does not require a Core, but rather requires a certain condition to be met in order to be turned face-up. If a Conditional Guardian (CG) is defeated, it is flipped face-down in a tapped position immediately, and cannot be used again. Only one CG is playable per player, per game. A CG cannot be chosen for an effect that would make it leave the field. When a Guardian is mentioned in card text, it can also refer to CGs, but not vice versa.

Skill
A special card that grants specific effects. These don’t last too long, and often require Points to activate. Skills being activated go in the Skill Zone (SZ). A Skill can be chained onto another Skill by placing it in the SZ, on top of the other Skill. When resolved, Skills are sent to the Exile Zone (EZ). Swift Skills can be used during either player’s turn, while Slow Skills can only be activated during your turn. Skills also can be color coded.
Domain
A card with certain continuous effects that remains in the Domain Zone (DOM) while active. If a new Domain is activated, the Domain that was in the DOM is sent to the PZ. Domains are also color coded.


4. What are the different types of effects?

Show
An effect is something that can be activated that creates actions. There are three types of effects:

3. Passive
Passive effects apply continuously throughout the game, or are mandatory once the condition is met.


5. What are the different Species of Guardian?

DIAGRAM OF ONE HALF OF BOARD 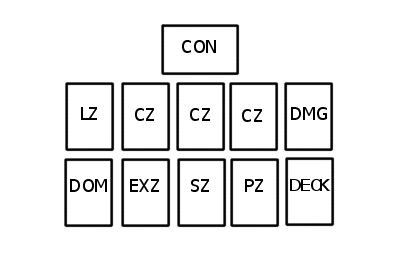 Show
In ChromaCore, cards can only be played to Zones. Below is a diagram of the Zones on one half of the board look like. Each player will have this layout on their side of the board.

The codes above correspond to the Zones’ abbreviations, which are displayed below, along with explanations of what each Zone is and how each Zone operates.

Condition Zone
CON
The Zone in which the Conditional Guardian (CG) must be placed face-down at the start of the game. It will be placed face-up when activated.

Layer Zone
LZ
The Zone in which Cores are initially kept, and are yet to be played to Core Zones (CZs). The cards kept in the Layer Zone (LZ) are referred to as the “Layer Deck”.

Core Zone
CZ
The Zone in which Cores are placed, as well as Natural Guardians (NGs) and Layered Guardians (LGs).

Exile Zone
EXZ
The Zone where used Points and Skills are sent after being used or destroyed.

Skill Zone
SZ
The Zone in which Skills that are used are placed while resolving.


8. What does this word mean on the card?

Show
Several pieces of text on cards describe particular effects. Here are some of them:

(to) activate
To pay the cost of a Skill or Guardian and thus unlock its effects.

(to) choose
To select one card when given a choice between multiple cards. If this word is used instead of “target”, it is not counted as targeting, though it functions similarly.

(to) damage
To send a Core to the Damage Zone (DMG). Cores are the only type of card that can be damaged. If a card is damaged, it is sent to the DMG. If a Guardian loses a battle, it is not considered damaged.

(to) defeat
To turn a Conditional Guardian (CG) face-down and place it in the “tapped” position. The defeated CG is then treated as not existing.

(to) place
To play a Guardian.

(to) rejuvenate
To use a Conditional Guardian’s (CG’s) effect to return it to an untapped state, face-down, to be played a second time that game. Only CGs can be rejuvenated, and they can only be rejuvenated once.

(to) target
To select one card as the recipient of something. Can be compared to, but is not the same as, “choosing”. “Targeting” is not counted as “choosing” something.


How to play with others on untap.in:
Show

WARNING: UNTAP.IN ONLY WORKS ON GOOGLE CHROME, OR FIREFOX, APPARENTLY. MAYBE A FEW OTHERS, TOO. NOT PALE MOON, THOUGH.
So, how to set up a game on untap.in:
1. Go to untap.in
2. Make an account (make sure to verify your email), or login. Make sure that your account is set so you can access the CCCG section of the site.
3. Download one of the decks either in this chat, or in #deckbuilding.
4. Go to decks and click create a new deck. Give it a cool name, and set it to being a CCCG deck.
5. Go to "Paste Deck from .txt", and open the .txt deck you downloaded.
6. Follow the instructions on the .txt when copying it to untap.in.
7. Save the deck, and go to Games to play.


Setting up a game on untap.in:
Show

1. Both players hide their Conditional Guardian and reveal it only to themselves (access the menu for this by hovering your mouse over the card (Facedown and Reveal to Me are the commands you want.)
2. Reveal your Cores to yourself similarly to the Conditional Guardian.
3.Draw 5 cards, this is your starting hand.
4. Decide who goes first.

So, we recently completed all of the templates for ChromaCore! Hopefully they're well-received.

In other news, the newest set, Creation of Ages, is available for testing using the not-so-pretty placeholder cards! Feel free to check those out at Untap.in.

But anyways, let's have a sneak preview for the card backing used for this game: 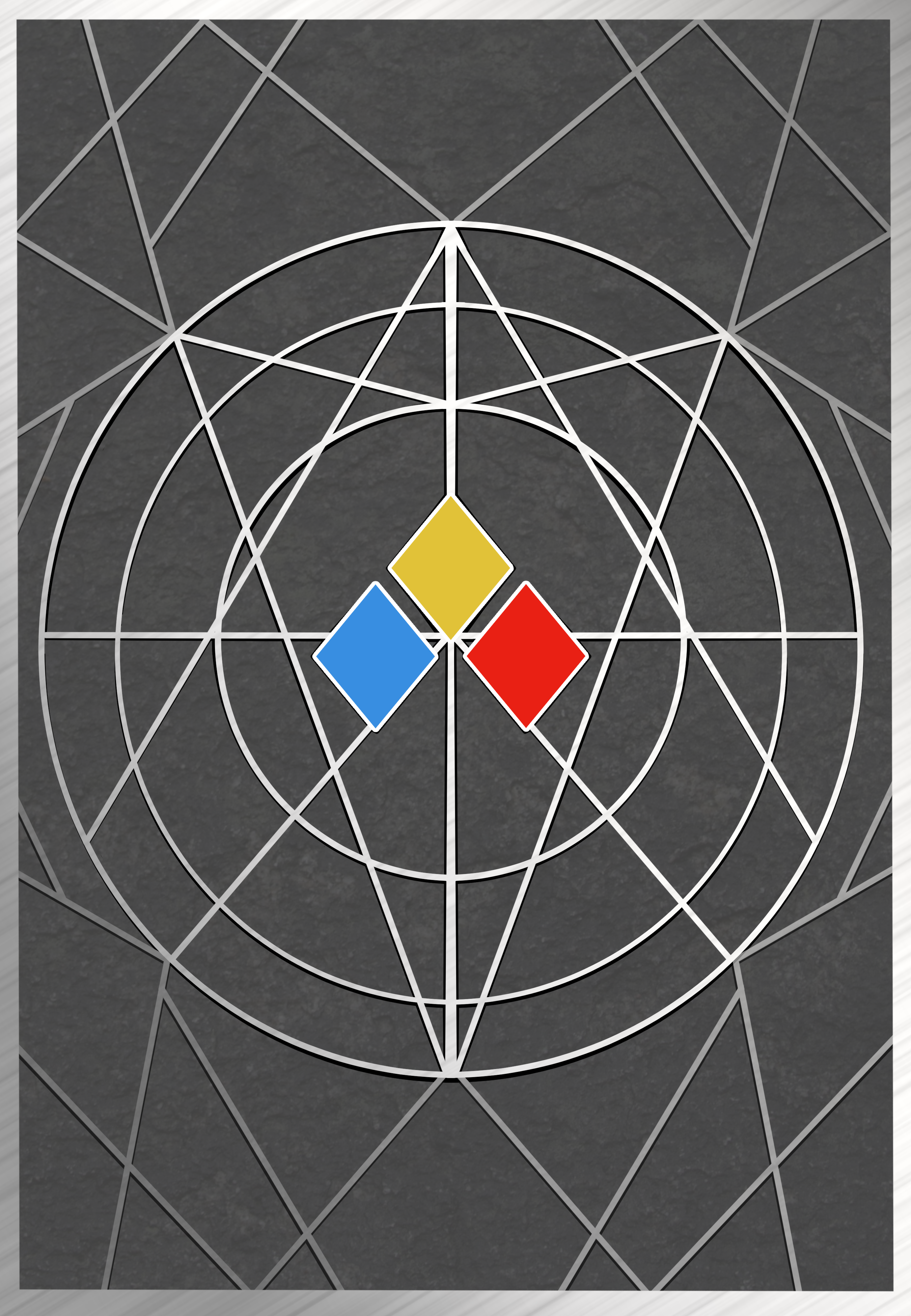 ...Might be a bit too big for RMN, huh? Check it out, alongside the other templates, in their full glory on the Official ChromaCore Discord.
Simply follow the download link above!

I'm not too big on card games, but it's interesting to see one of those around here, especially made with other means rather than RPG Maker.

I will try doing a match one of these days, see if it's fun and it works. It sounds interesting thus far.
Good luck with the development of the game!

author=OldPat
Oh, you finally managed to make a gamepage for ChromaCore!

I'm not too big on card games, but it's interesting to see one of those around here, especially made with other means rather than RPG Maker.

I will try doing a match one of these days, see if it's fun and it works. It sounds interesting thus far.
Good luck with the development of the game!


Thank you so much! Yeah, I put way too much work into this project, and it's just beginning. I'll try to do blogs to update everything that's happening and show off the proper card templates, since the ones used for the images in the... well, image section, are just placeholders.

I certainly hope everyone who tries it, enjoys it.
Zorga

author=Zorga
I wonder if there's a way to put an integrated untap.in interface on this page, or something.

I wish, but I don't think so. Uh, I guess I could try to directly contact the owners of that site.
CashmereCat