Today's blog update isn't so much about any sort of progress, as much as it is talking about Soma Union's development cycle and how I've been able to improve my approach to developing games on my life's ever-busy schedule.

As some of you may know, I had been previously working on another game prior to this called Crescent Prism: a game that, after releasing several games over the course of a few years, was my undertaking at finally making my "big one", a dream project that I was excited to tackle. It was poised to be a 10-12 hour RPG spanning a grand adventure.

About a third of the way through development, I was fortunate enough to land a full-time position in my day career after years of searching. Which meant stable income! But unfortunately this greatly impacted Crescent Prism's development and making games sadly doesn't pay the bills, so I made the heart-wrenching decision to shelve the game and release the first portion of the game that I had completed, rather than drag it out into a multi-year project that I no longer had the passion for.

Thankfully, I managed to pick myself back up and told myself I wasn't going to let this whole game development thing end on a bad note. So here we are today with Soma Union.

But what is different this time?

For one, Soma Union is a smaller project than Crescent Prism, poised to be about half of the size of that game (Don't quote me on this because I genuinely do not know how exact that will be). And the absolutely impossible task of making a long RPG while balancing a full time day job completely unrelated to game development has helped me find a better sense of rhythm.

So here are a few things that have changed between then and now:

Traditionally, my approach to development has always been very loose. "Work on it when I can, and on whatever part I feel like working on" had been my mantra for years. But this eventually became impossible: COMPLETELY lacking structure with a limited development schedule meant that I never had a sense of accomplishment when I did work on it. And it felt like nothing was ever done, since I could never look back on an evening's work and say "I got this, this, and this done today."

Now I'm setting aside time specifically to work on the game, closing the Firefox tab of the accursed hellscape that is Twitter, and throwing on some game OSTs to get the mojo going. Rather than just working on the game whenever I feel like and never mentally preparing myself to turn away from distractions.

One of the biggest downfalls of Crescent Prism was oversharing its development. When you're a small-time creator without a huge following, it's easy to fall into a mind set of wanting to regularly share content to get that instant surge of feedback. Those likes and retweets, and that instant gratification that comes with it. This was especially easy to fall into because I am otherwise not an artist or a content creator online, so I have not been able to share more short-form content like sketches and drawings to keep my audience engaged.

What this ended up doing was giving myself quick surges of gratification rather than saving what I had for later. Ultimately I felt like I had shared too much in order to justify the fact that I was working on it at all.

Soma Union, however, is a sequel, which is one of the reasons that I have been sharing less of its development than I had for past projects. For one, it would be too easy for returning players to over-speculate on the game's events based on the existing lore of Soma Spirits. But I also find that being more selective in sharing progress updates has had a positive impact on my morale, as well as demphasizing how much I value short-term feedback like likes, retweets, etc.

3. A Better Sense of Consistency

There's no doubt that the way Crescent Prism looked at the start of development in late 2016 barely resembles what it looked like when I canned it in 2019: 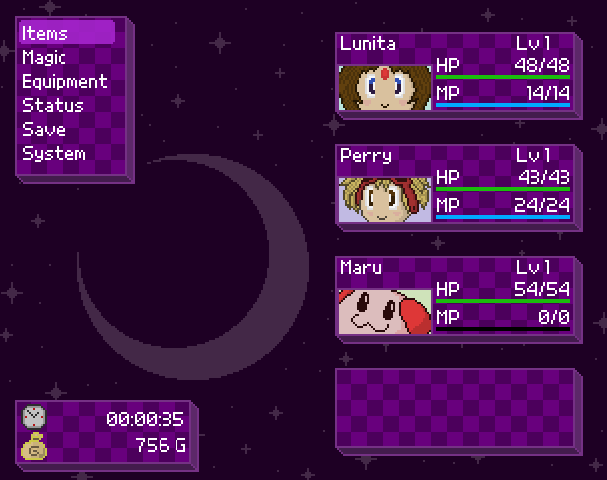 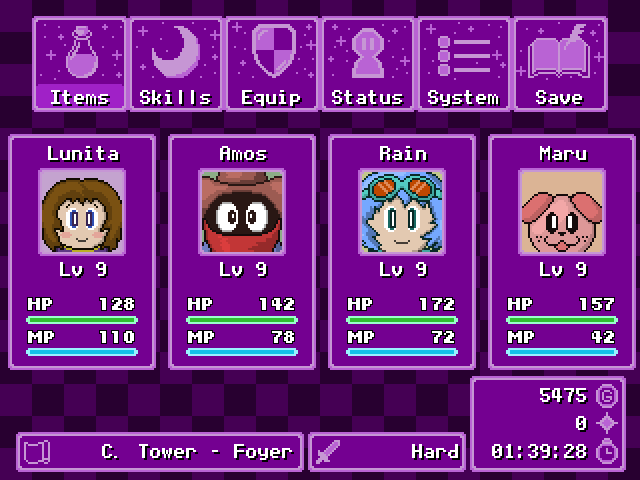 Pretty stark difference, right? What in the sam hill is going on with those gremlin-looking people in the first screenshot?

Having jumped right into Crescent Prism after Soma Spirits, the game started off with that same strange inconsistency that Soma Spirits had. While I'm hardly an ever-evolving or professional artist by any means, I think I've been able to find a better sense of style in the last year or two than I had for years up until that point. I've been able to set better rules for myself in not just how to draw things, but also how to make things work efficiently within RPG Maker. This sense of consistency has helped immensely in that both "art evolution" and "code evolution" have become much less of a problem.

Soma Union's pixel art doesn't feel as experimental, nor am I trying to figure it out as I go. I can finally sit down and say "Okay, these are the rules I am going to set for myself with this game" and only improve those rules when I need to, rather than re-jiggering the whole thing like I had at least twice during Crescent Prism's development. 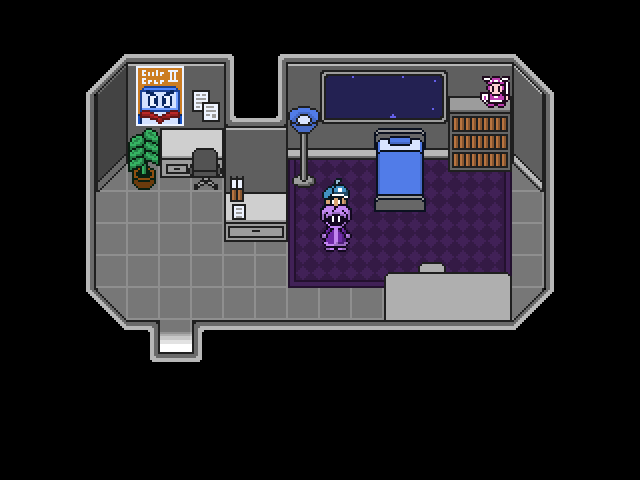 This basically means I'm trying to make as many big decisions about the game now, while the game is still fairly early in development. That includes the art style, the battle system, the menus, and any major gameplay systems. So I finished as much of the engine as I could right from the very start, in such a way that I should only ever need to revisit them much later on towards the end. This has helped streamline developing actual content, instead of just leaping in head-first without a game plan. And now the rest of the actual game can be worked on without worrying about any of it.

All of this has helped contribute into Soma Union being much more manageable than previous projects, and I still feel myself going strong. While I don't think the game will be completely finished by the time 2020 is over, I can at least look at how I'm approaching it and not feel like I'm going to dread the rest of this.

So please look forward to more updates. Thanks for reading!

Close
01/24/2020 03:34 AM
So cool that you've locked down a more healthy and productive approach :DDD I need to learn from this (and also close that Twitter tab more often XD)
DungeonDevDude

Close
01/24/2020 02:44 PM
This was actually something I can relate too. Changes in scope, a busy work life, and pretty much everything else you mention have led to me working on stuff and pretty much never publically releasing anything.

I’m trying to change that this year, but it’s inspiring to see people like you and everyone else here releasing and working on great things.

You seem like you have a really solid approach here, so all I can rally offer is my best wishes and a solid play through of the game when it’s out :)
Red_Nova

Close
01/25/2020 05:39 PM
Deciding on a more structured approach to development is definitely a huge accomplishment, so congrats on that! Share only what you feel comfortable sharing, and don't burn yourself out. You can do it!
Pages: 1