Soma Union has been out for over a year now, and it would seem like a strange time to make a major change to the game. However, over the past few months I have had reports of both Soma Union and Brave Hero Yuusha EX crashing for a small number of players. It has been a perplexing issue for some time now. But even if just a few players are experiencing random crashes, then addressing the issue is certainly something that needs to happen and is long overdue.

At this point, I am 99% certain that I have identified the issue: Both of these games use a plugin that allows for a Bitmap-based font rather than a truetype font that RPG Maker renders text with by default. This was put in place in order to give these two games something closer to a pixel-perfect font since RPG Maker VX Ace does not render pixel fonts very well at all. However, I'm led to believe that this is the plugin that is causing the crashes, as Soma Spirits: Rebalance does not use this plugin and has not been crashing randomly.

I do not fault the plugin itself, and what it sets out to do is achieved remarkably well. More than likely, it just simply isn't playing nice with other plugins that I have installed.

So in order to address the issue, I am going to try removing the plugin from the project file, which pretty much means that RPG Maker will go back to rendering font in its default style. This also means that I will need to replace the font in the game completely with a different one that is compatible, because the existing font is actually one I drew myself in a bitmap file, and this is the quickest way to solve the issue than try to convert the font into something readable by RPG Maker.

Below is an example of how Soma Union looks before and after the change: 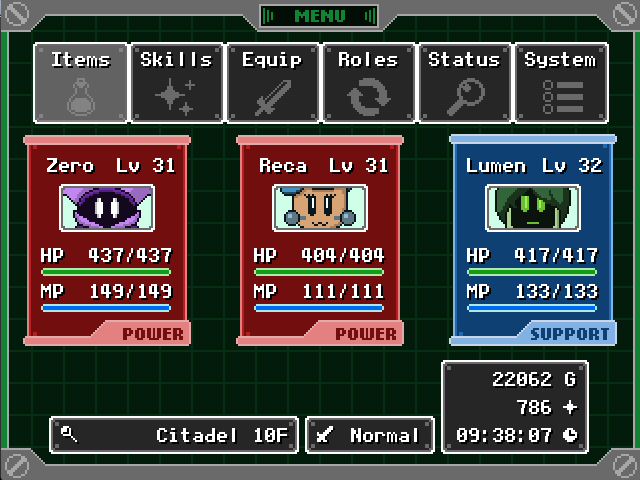 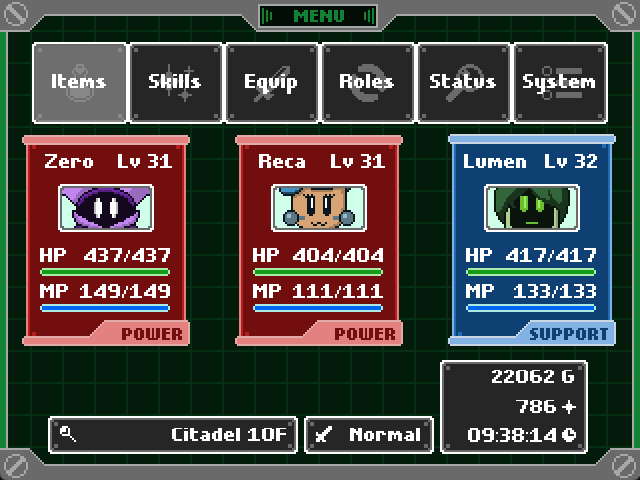 I've tried to pick a font that matches the style and spirits of these two games, and one that is more readable than the current one. But replacing the font will take a little bit of time to complete, as there are a fair number of text-based graphics that are actually pre-rendered images such as the panel descriptions on the Star Chart. I will have to remake those entirely, and there are quite a few of them!

This change has had other benefits, as well. The game runs noticeably smoother without the plugin, and the reduction of script bloat will help it be more efficient overall.

I am planning to tackle Soma Union first, and then Brave Hero Yuusha EX after that. Understandably, not every player has had issues with crashing and may even prefer the old font style, so I plan to keep the existing version of each game available to download when these new patches are released. Updating to the new version will be completely optional (not sure how I'll go about doing this on Steam yet). Save files, etc should carry over just fine since I don't intend to make any other changes besides tackling this one issue.

I want to offer my sincere apologies to the few players who have had these two games crash randomly. And I am not even 100% sure if this will fix the problem. But hopefully this will resolve it once and for all.

Close
09/10/2022 03:40 PM
Not that it matters at all, but this should also help anyone who wants to play this game on an android system through an emulator.
Pages: 1