3 reviews
Synopsis
It has been 2 years since Koros and his allies defeated the demon Baetylus, spirit of the crimson meteor, sealing him away. However, their victory came at a great cost, Koros' friend Tayo's life. Now traveling the world seeking a new purpose as his divine focus has been achieved, Koros now works as a mercenary in the barren wastes of Morda Vael, seeking adventure wherever he goes. One day, he decides to set out on his most dangerous mission yet; to the defeat the diabolical "Almighty Lich" who plans to use an undead army to conquer the world. Will Koros succeed on his mission and be able to return to his friends, or will this mission be his last? What sorts of trickery await him within the crypt? Will he fall prey to the Lich's evil scheme? Find out in this short adventure RPG by KrimsonKatt productions!

Features
-Multiple endings based on your actions!
-Non linear dungeon exploration!
-Epic music from multiple famous franchises!
-A deep and complex battle system inspired by Octopath Traveler!
-Two optional secret bosses!
-Short and sweet experience you can finish within a single session!
-A story that finishes up the loose ends of Chronicles: Meteorfall and delivers a satisfying experiance!
-And more!

Gender: Genderfluid Male
Age: 21
Race: Dragonkin
Class: Blademaster
Element: Fire
Weapon: Chronoblade
Ultimate Skill: Infinity Blade/Zettaflash
Description: One of the legendary heroes who defeated the demon Baetylus and the evil warlord Ozma 2 years ago. He possesses the Firebrand, the mark of Valfa's
chosen, and has gone on many adventures both before and after his quest to stop
the crimson meteor. He is wise and resourceful, but also a bit hot headed. He
used to be extremely perverted two years ago, but has mostly gotten over that. He also enjoys crossdressing in private and occasionally every once and a while, and he's good at it too. He's also a huge fan of the "bunny bingo gang" idol group, believe it or not.

Gender: Female
Age: Unknown
Race: Unknown
Class: Sorceress
Element: Dark
Weapon: Deathqueen
Ultimate Skill: Bohr Omega
Description: A mysterious woman who was found on the side of the road near the Lich's crypt. Possesses great knowledge about dark magick, or "elder magick" as she calls it, and is very shrewd, if strangely cheerful. Is Koros' closest ally on his quest through the crypt, and may be just as powerful if not more so than Koros himself.

Gender: Unknown
Age: At least 3000
Race: Terror
Class: Necromancer
Element: Dark
Weapon: Unknown
Ultimate Skill: Unknown
Description: An immortal, ancient, undead mage who was said to grant people immortality during ancient times on request. Refusing to die, the mage used their largely unfinished immortality spell on themselves, turning them into the undead monstrosity you know them as today. They seek to consume all the world's people, and therefore, their knowledge, under their control in one united hive mind. Koros must stop them!

Gender: Male?
Age: Unknown
Race: Terror
Class: Pyromancer
Element: Fire
Weapon: Flame Whips
Ultimate Skill: Firestorm
Description: A massive, overgrown ghost who loves spicy food. Some say he used to be a famous chef when he was alive, others say that he was a serial killer famous for baking people alive, and some say he was both. Either way, he's a very dangerous foe, and now owns his own restaurant for the undead where the main course is YOU!

Gender: Unknown
Age: Unknown
Race: Terror
Class: Cyromancer
Element: Water
Weapon: Icy Spike
Ultimate Skill: Icestorm
Description: The smartest and fastest of the Lich's generals who knows more about Chili than he lets on. He repeats over and over that Chili is some sort of "traitor." What could that mean?

Gender: None
Age: Many
Race: Amalgamate
Class: Chaos Warden
Element: Thunder
Weapon: Chaos Swarm
Ultimate Skill: Thunderstorm
Description: A mindless mass of many suffering minds and souls. It only has one instinct: destroy, but regardless of it's non-existent intelligence it is still one of the Lich's most powerful minions and is not to the trifled with. It constantly seeks it's own demise due to the constant pain it feels. Will you be the one to finally end it's suffering?

Gender: Female
Age: It's a secret!
Race: Human?
Class: Merchant
Element: Light
Weapon: Golden Bow
Ultimate Skill: Gilded Thorn
Description: A suave merchant girl who always seem to be at the right place at the right time, always ready to sell whatever goods she has in stock. She always seems to be in multiple places at once, with her many "sisters" working independently in every town and dungeon entrance. Who exactly is this mysterious woman? Is she is goddess? A multi-dimensional hive mind? A forgotten first dragon? We may never know. 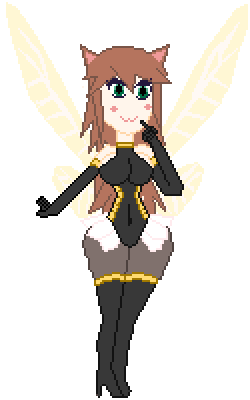 Gender: Ascended
Age: Infinite, (Zutara years) 20 (celestial years)
Race: Celestial
Class: Creator
Element: Celestial
Weapon: True Solaris
Ultimate Skill: True Infinity Overdrive
Description: The true creator of Zutara and progenitor of all life in the Zutara Multiverse. She was the one who spawned the seed that would form the World Tree, and her children are the gods Zophia and Elzakalas, one of pure light, the other of pure darkness. She appears often in the background of these various tales to inform of viewer (or player) of various things and important meta information. She also serves as the narrator of the events taking place, but rarely if ever interacts with her creations and if she does she's in disguise, at least to her creations, as they cannot grasp even her mere existence.

Description: A mysterious and creepy girl that looks a bit like Koros. Who is this woman? How is she connected to Koros? Does she even exist? Maybe, maybe not...


This original version of this game released in October 2019 as part of the "revive the dead" event. A later re-release using RPG Maker MZ was released in early 2021. This version, the 3.0 release that goes back to the MV engine, will be released in summer 2022.

A new version has been made available!

Just to let anyone know, a new improved version of this game is currently live on this site. Remastered using RPG Maker MZ, this new version, Crypt Challenge EX, contains improved graphics, sound, and dialogue, a brand-new ending, completely re-done balance, and a brand new battle system. For any people who have already played this game and newcomers alike, come check out the definitive version of Crypt Challenge DX, Crypt Challenge EX!
The Main Hub

Beta Title Screen for the 2017 version. 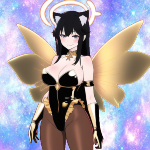 Just a random catgirl on the internet.
2837

Just a random catgirl on the internet.
2837