Long ago, the goddess An Feng and her husband Zhi Hun created the world, the spirits, and its inhabitants: man. Fearing any one force becoming too powerful, they partitioned magic into separate elements (body, mind, and spirit), each belonging to a different spirit. They then retired, satisfied with their work, but their son, Hei Ling, grew greedy. He desired the earthly kingdom for himself and he raised an army to take it by force, turning his parents to stone.

Millennia have passed, and the world is on the brink of destruction as Hei Ling's dark reign continues. One sorceress, Jun Lin, has taken it upon herself to resurrect the goddess, defeat Hei Ling, and restore order and balance to the world. As she struggles with her quest and her mysterious bloodline, the world teeters on the brink of destruction. Can she bring order and peace back to a world that seems all but lost? Lore is an episodic RPG genre game with an emphasis on atmosphere, story, and casual fun gameplay. A project that initially began as a 15 minute birthday present for a friend and slowly morphed into a 4.5(give or take) hour very much not birthday present. (He got a different present, don't worry).

After a long month of getting ready, I'm happy to announce that a complete demo of the first three chapters of Lore is available for download as part of the Release the Dead event! Future updates will likely flesh out some extra details and quests in the chapters (particularly Chapter 3 which, while complete for the purposes of the main storyline, doesn't feel as fully developed within the world as I would like it to eventually be.) While work begins on Chapter 4, I have to announce that I will be pausing development for the month of November while I finish submitting my PhD applications. I am excited to resume working on chapter 4, and I intend to do so as soon as possible in early December, aiming to release a download for the first 4/5ths of the game as early as late December/early January. In the meantime, I look forward to keeping up with people's input about changes they would like seen in the first three chapters and directions they would like the game to go for its last (and most likely longest) two chapters of gameplay. I am also anticipating releasing periodic blogs like this which spotlight characters and how to play them, starting with the godly empath: Zhi Hun. 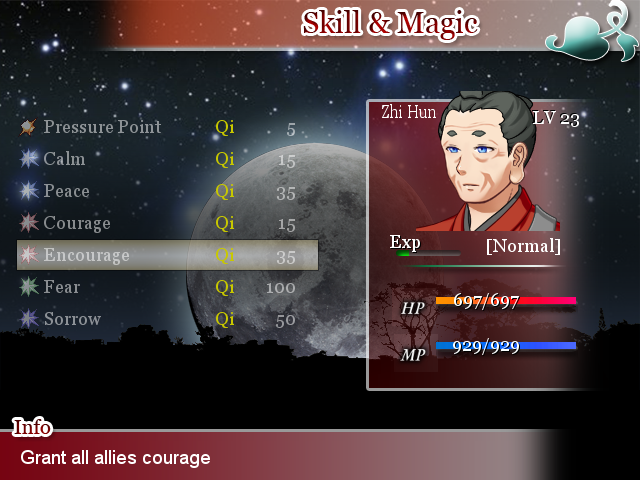 A list of available skills Zhi Hun can obtain by the end of Chapter 3.
Zhi Hun is a well balanced character who focuses on buffing players and debuffing enemies through his skilled emotional manipulation. I have always wanted to write a character with empathetic magic into a game, and so it was a lot of fun to think about the ways in which this system can be implemented both in terms of story and gameplay. From a gameplay perspective, Zhi Hun diversifies the roster as a character who is focused primarily on manipulating advantages and disadvantages for the players and enemies, rather than dealing damage or healing necessarily. Playing his buffs at particular times can serve to greatly empower specific types of attacks during a difficult battle or disrupt a powerful boss' special attack with a well timed debuff. Given the diversity of options that Zhi Hun can acquire, he can be well played in any context when the player knows what to expect. Spells like Encourage are particularly useful with combinations of characters executing physical attacks that need to land successfully while Peace is most helpful when characters are focusing on dealing magic damage (particularly magic using the "Mind" element) or healing. Other spells such asFear and Sorrow can be similarly well timed to reduce the power of incoming enemy attacks or disrupt the speed at which those attacks are coming. Experimenting with his abilities in combination with other characters and certain enemy types can lead to complete sweeps of areas if played correctly or absolutely disastrous boss runs if used in a non-optimal order. 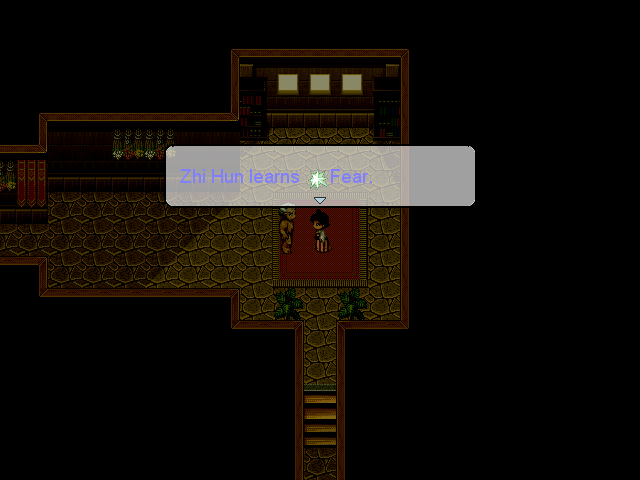 Zhi Hun learns new spells as he encounters those emotions in game.
As a god who spent millennia as a statue, Zhi Hun's powers are subprime at the beginning of Lore. However, through story and side quests, he may delve deeper into his own emotions and learn new skills. Completing quests and progressing through the story are integral to advancing Zhi Hun's spellpower and unlocking new emotions for him to cast. His journey is inherently more emotional than An Feng's, as he chooses to grapple with his personal demons through exploration of what they mean. His embrace of positive, negative, and neutral emotions alike facilitates his own growth on his path to realization that the life he had with his wife and son is gone forever. While he grapples with questions of love, both by bond with his wife and by blood with his son, Zhi Hun's journey also emphasizes the acceptance of sadness, anger, guilt, fear, and a whole range of emotions. As he learns to embrace these, on behalf of himself or others, he too learns to wield them in battle.

That's all for this week! I hope you enjoy the demo, and I will be back in the coming days (weeks?) to talk some about An Feng and Jun Lin!

Close
11/07/2019 08:25 PM
I'm sorry, but I couldn't finish this, I was forcing myself to play it but I just couldn't do it anymore. The graphics are fine, the mapping looks great too, though there are a bunch of passability issues and many problems with things getting on the path of the player. Like areas where the player automatically thinks of just walking forward, but very small doodad in the floor blocks your path, making you go around it. This isn't usually a big problem, except that you are walking that same path many many times, and it gets a little annoying (The first temple in the game and the road that connects the two areas of the Black Mir comes to mind).

But what gets me, is that the game is so.... boring. I can't really pinpoint what exactly causes this, but I just can't get invested in it. Maybe is the slow pace that most RM XP games tend to have? I had to use Cheat Engine to play at 2x speed at all times... or maybe the weird balance? Every new area with generic enemies will destroy your team when first fight them. I can't believe that a pair of frogs could be so powerful. And when I thought I finally got past them, a bunch of Ravens wrecks my party twice as hard. And that's without talking about the useless healing items, that are relatively expensive but heal such a small amount that you'll need around 5 of them to completely heal yourself after a battle. And don't even think about using them in battle, actually, don't even think about healing any considerable amount of HP mid-battle, because while many skills have healing properties, none of them are dedicated "Heal" spells. Heck, I don't even know what most of them do, "Sharpens an ally senses" sounds nice, but what does it do? Should I cast it on a physical o magical attacker?

I feel bad for being so harsh on this game because the Chinese setting feels original in a world of generic medieval fantasy games. And the way you learn new spells was pretty interesting too. But overall it's such a pain to play. If you have the patience though, give it a try, because I'm sure there's something to enjoy here.

author=Everguard
Eh, can't be for everyone. Thanks for giving it a shot and for the feedback!

Thanks to you! Looking back at my comment... I think I was far too harsh on the game, and I want to apologize for that. I just hope that some of my feedback was useful and that it can be used to improve the game!
Everguard

Close
11/08/2019 03:25 PM
No worries, your thoughts are your own and valid! I would say with regards to balance changes, I’ll likely readjust some healing items and spells (when I have a chance to work on this again in about a month), and I’ll maybe take a look at the difficulty of the enemies, but that was more linked to the pace of the game. I’m pretty happy with the slower pace (personally) as for me this game is about the world & atmosphere, as well as encouraging players to explore the areas as well as their own skill sets and how they interact. I understand that may not be what everyone is looking for, and so I will take another look at the balancing issues, but with regards to the pacing I would say I’m pleased with the way the game currently plays. The font color issue is 100% warranted and a nightmare I will immediately change.
Pages: 1