1 reviews
Save to Dropbox
Originally inspired and huge thanks to Moghunter's Evo Expert:
https://atelierrgss.wordpress.com/projects/evo-expert/

Rhythm Music Network is a mix of rpg battle and rhythm game, where you'll be playing(and fight against) characters submitted by the community!
You'll be attacking your opponents by hitting the notes like most rhythm games. If you found yourself in a dire state, unleash your skills to turn the tables!

This game was revived in conjunction with Revive the Dead 2019 event.
If you're interested in joining the game with your favourite avatars/portrait, check out the links above(Recruiting You!) to see the availability and requirements!

A small notice by a smol doggo

Hello everyone and hope you are having a great day.
(If not, please remember to smile :) Smile for me, pretty please?)

Anyway, the purpose of this blog is to serve as a minor update for my fellow friends and followers(whichever you are, I love you all). Thank you so much for the patience and the lack of updates. You all deserve an update after the past months.

Also here is the current progress of the game:
-All the new characters and their respective pictures/skill cut-in etc have been implemented
-All the musics submitted have also been included!

Why is the game not updated yet?
-I'm still trying to implement a real rhythm game ._. sorry. (With new music too!)
-Also I forgot to implement the icons which tells the player what each skill does.

Note about rmn musicpack 2 music:
Initially I wanted to include their music along with the new characters update, but...Let's just say I think they deserve a special standalone update for them :3

Again, really thank you all for the patience. And yeah, just to tell you all this game is not forgotten/abandoned.

Edit: Please feel free to notify me if I missed you out in the others!
Also feel free to unsub/tell me to delete you from others if you don't want to.

Close
10/30/2019 05:25 PM
This looks fun and fascinating. Rhythm game is not a genre of game I normally play, but I will make an exception and check this out.

Congratulations on making this in Unity. (At least in the eyes of most of the world as RPG Maker is perceived) in just about a year you have surpassed me as a 'real' game dev. :D

Srsly tho, congrats on doing this in a big boy engine, much as I adore my RPG Maker. It would have been so much easier to do this using Moghunter's script. I almost certainly would have done it that way. But you learned a hell of a lot more about game design doing it this way. Smart. The community interaction/quasi-site-event nature of it is also very cool.

And obviously I want to be in it, I mean duh. I just need to think about what avatar/persona/character of myself to put forward.

author=pianotm
There really isn't enough here to comment on yet. What are you hoping to turn this game into?

I think their most recent blog addresses this :)
JustAShyDoge

Close
11/02/2019 02:07 AM
I'm really sorry XC
I somehow forgot to include the controls screen to explain what should happen/should not specially when I didn't finish the actual idea. I've added a controls pic for now and here:

Sorry its horrendous, it's a quick paint.
Show 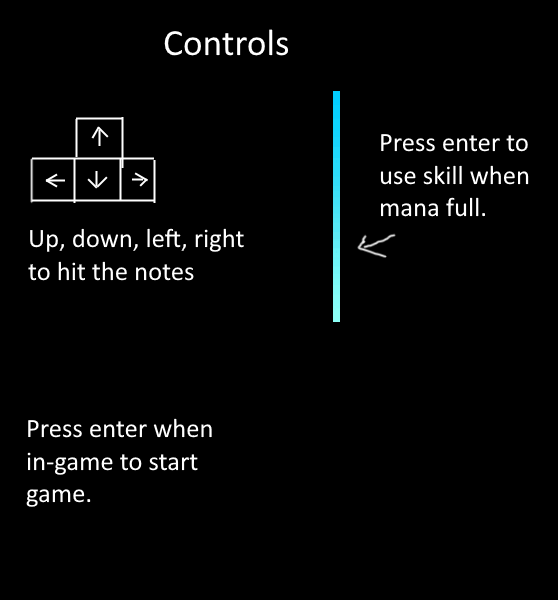 What should have been was a "Press enter to start" when the scene loads, and a controls tutorial scene for skills usage.
Again really sorry I was dumb and forgot to include that!
Kylaila

Edit: And you can even be in it?! O.O
Well. That's if this gets expanded at all.

Will you work more on this, Doge?
JustAShyDoge

Edit: And you can even be in it?! O.O
Well. That's if this gets expanded at all.

Will you work more on this, Doge?

Thank you!!! And really sorry for the late reply! (I went madness hibernating trying to fix the game exploit issue.)

Yes! I will work more on it! The first update will be coming around next week/end of month, focusing more on bug fix/UI and other minor issues. With the 2nd update on Dec, focusing on adding more stuff! Just in time for Christmas :3 . Also, would you like to join in the game Kylaila?
Kylaila

And I would love to be in it : ) I'd just need to decide on an avatar, haha.
StormCrow

Close
11/14/2019 02:08 PM
Sorry to everyone that joined the game but I didnt add you in this update XD
The new update focus mostly on fixing and adjusting stuff. You will all be a great Christmas present! New songs coming too!

Edit: Also updated game production to complete, cause why not? Xd If nothing goes wrong, left is adding moar stuff.
Kylaila

Yay for updates and thank you for the note! I was like 'ARE NEW FACES CANCELLED?!' and they weren't
JustAShyDoge