...but in Rpgmaker!
FFVII Regenesis is a fan made sequel to FFVII Dirge of Cerberus and Advent Children, set about ten years after the first game.

Oddly, we start playing some scenes already seen in some of the previous games such as Zack last stand and Cloud first mission with the Avalanche rebels: these familiar parts are just an introduction to the game and a sort of tutorial before the first charter of a new adventure for the old heroes.

The story begins with Vincent Valentine, a secret character in FFVII and the protagonist of Dirge of Cerberus, investigating on the appearance of some monsters.
Don't worry if you start with just one character, he will be soon joined by Yuffie and then by Cloud Strife in his adventures (Tifa joins the team only towards the end, and unlike th others she's a sort of support character for the last part of the game since she's only playable during one combat and it's not possible to manage her materia setup).

I think that the plot was pretty interesting as it is clearly made to connect some parts and situations of the serie that were left obscure and unresolved (the secret ending of Dorge of Cerberus andante fate of an important character introduced in Fjnal Fantasi VII Before Crisis), but being this the Chapter one out of three, many things aren't clearly explained. Anyway it is certain that the author knows the story and the lore of FFVII quite well! 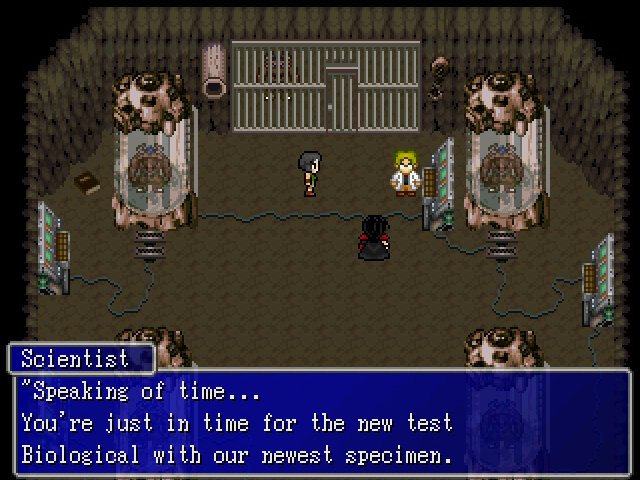 This does not sound good at all! I guess this is time for a boss fight!

Graphics & music
The game uses Rmk2003 styled charsets, that in my opinion look better than those ugly 3D chibi characters that were used in the original game (in fact I preferred the old graphics used in FFVI). These charas and chipsets are taken from different sources, so there are some differences of style between some of them, but this is not so frequent to make them annoying.

Combat parts instead make use of sprites rips from the games Final Fantasy Brave Exvius and Final Fantasy Record Keepe: these looks nice, they are detailed and the battlers are also nicely animated, anyway it's a bit odd that the enemy sprites are a bit smaller than the battlers, because in Final Fantasy it's usually the exact opposite, but this isn't a problem at all.

Music for the most part (unsurprisingly) consist of many rips from FFVII, but there are some new themes that I did not recognize, but I did not play every Final Fantasy game, so I am not sure if these are rips too or if they come from other sources. Anyway I found appropriate the choice of music and tunes, and I liked them (hearing the victory fanfare never gets old!). 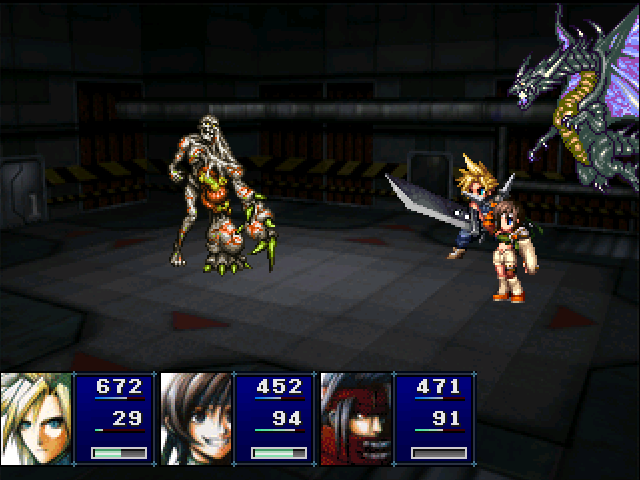 Gameplay
The game is clearly inspired to the original Final Fantasy VII, so it mimics the gameplay of the original game: we wander the world of Gaia (familiar for those who played the other games, but with some changes) fighting monsters and bad guys (Turks and Shinra soldiers are back, like some old monsters like the giant serpent that lives in the area near Kalm) in some dungeons (that aren't very long or complex), we visit old and new towns looking for items, clues and shops that sells gear, consumables and the good old materia!

Combat is exactly as expected: old style FF combat: like in FFVII the magic attacks and summons are not learned level after level, but they are added buying and equipping materia. This time there are not weapons with limited slots, so it is possibile to equip all the materia spheres with the limit of one for type. They also improve with the use, unlocking more powerful elemental attacks.

An important difference is how the Limit Break works: now when a character is severely wounded, he enters the "Limit Break state": for some characters (like Cloud, Yuffie and Tifa) this means that the attacks will be far stronger, but they will lose this state if healed. Vincent instead will transform into Gilgamesh, healing him and improving his stats (but this also unequips his gear...a bit annoying).
For the most part I found combat encounters quite easy (maybe too east, but this is the first part out of three), anyway some bosses are really challenging, like for example the one in the forest near New Midgard. Anyway if you have everyone equipped with some extremely useful materia, like Cure and Revive, and you learn the enemy elemental weakness, every encounter will be really easy.

Besides combat there are also other activities, exploration, optional tasks like small puzzles to unlock safes for extra loot and a motorbike minigame. These are minor diversions that were present also in the original game, so I like seeing the attempt to integrate also these less important features. 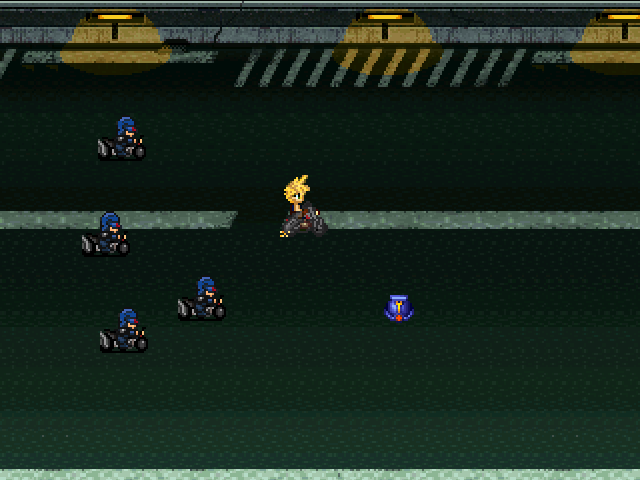 The Bad
Unfortunately, even if complete, this game is still worked on, so there are some minor flaws that aren't game breaking but are a bit annoying.
For example there are some translation errors especially in the second half of the game ("soldier's costumes" (uniforms), "be sure you do beautiful", etc...), some untranslated parts and some missing words. It's a pity because it would take little to fix these mistakes.

Another problem is that there are a couple of small bugs: some charsets (Vincent and Tifa) are different in one of the last cutscenes, Cloud during combat sometimes stops in front of the enemy (and this is rather odd if the enemy is a flying monster!).

Finally, as I wrote before, there are some charsets that are quite different in style from the rest, and also some odd choices(at a certain point the party members disguise themselves as Shinra soldiers... but later they wander the same place wearing no disguise!). But besides these little flaws there isn't much else to mention.

Verdict
This game is how we would have played FFVII if it was made like FFVI! No really, I like the idea of proposing a new adventure recreating the old feeling and style of the original game, introducing new locations and characters side by side with the old, familiar ones, I liked it so much that besides the translation errors and the mismatched graphics (that aren't a big issue, I think, but should be easily fixed) I had nothing else I could complain. It's true, there are some minor flaws, and this is "more of the same", there is nothing new or different, nonenthless I appreciate the effort to be faithful to the original, while offering something new at the same time.