Welcome to this review of Reaper of Swords, a dark fantasy 2d platform action game by Kory Toombs. What? Oh yes also last game I reviewed coincidentally was a dark fantasy 2d action game, but while Silver Night's Hunters was made in Openbor, this is made with Pixel Game Maker Mv, an engine I didn't know and I also never played a game made with it.
Until now!

Reaper of Swords is a short but pretty platform game in four levels, in which we play as the Reaper, a mysterious swordsman and killer that everyone seem to dislike, but he's the one tasked to save the world from an ancient evil. Or so I think!
This is because the game starts without any intro, and even is there are some npcs (the second level is all about walking and listening to peasants' monologues) that give a sense to the protagonist wandering, everything is deducible rather than explained (for example the protagonist's past). 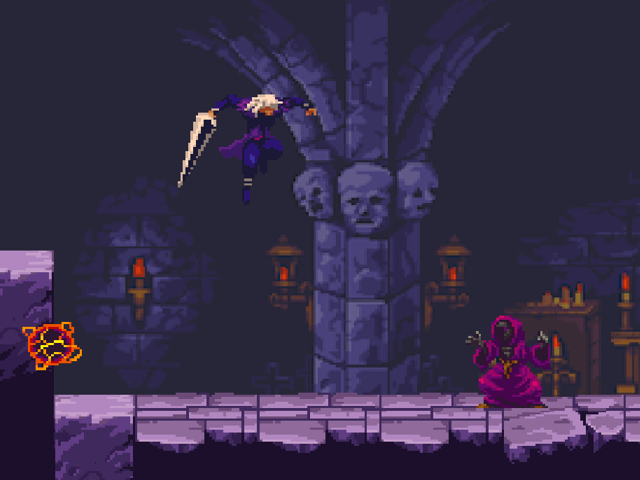 That evil minion has just shot his fireball, it's time for death from above!

But yes, this is an action game so I don't mind since games like Barbarian or Shadow of the Beast or other similar dark fantasy platforms of the past did the same (ok, there the story was explained on the manuals and there was at least an ending screen!).

I mentioned Shadow of the Beast because this game feels similar for gameplay: opponente rush towards the protagonist or throw projectiles, while the Reaper che can just jump, crawl or... attack with his sword, of course! It's a simple system, there are also no healing items of life bar, it's like Ghost'n Goblins: be hit a couple of times and you are dead, but luckily this means just restarting the level, not the whole game.

The game looks really beautiful thanks to the pixel art by Luis Zuno and also the musicby Pascal Belisle is pretty great. The resources used in this game are totally exceptional!
But also the level design is pretty nice, there are typical platform obstacles like gaps and moving platforms, and the game feels like a typical good retro game.

Anything bad? Well the only problem is that this game is a bit rough (for example there's no interface and crawling has no animation, the static sprite just moves slowly left or right!) and feels like a sort of prototype. More dialogues and story, an intro and a real ending would have improved a lot (also maybe adding some other features like usable items or upgrades maybe), anyway I had a lot of fun with this gameplay since I used to play similar games on my Amiga. It's fast, difficult but not too hard, controls are good, and in 40 minutes you can finish it. 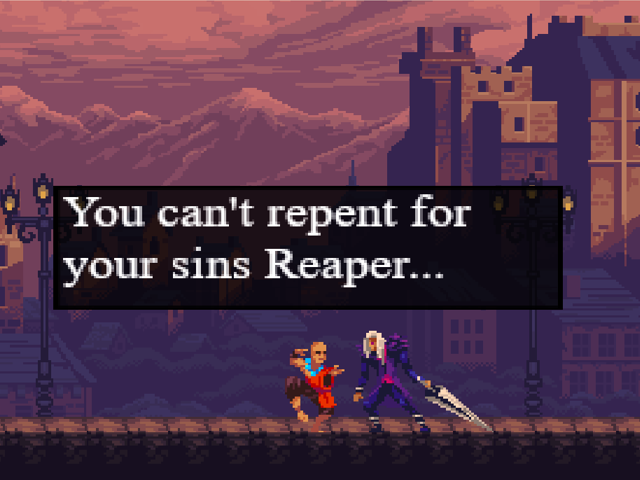 The few people you will meet don't have kind words for our protagonist and this monk makes no exception!

Verdict
So? This may be considered a rough beta of a good game or a flawed short complete game, in any case I had fun! For now it is just a really good prototype, but even if I guess that most players would rate it 3/5 (it's a game that feels made in the '80-'90s but still not a bad one!), I will give a 3.5/5 both because it's fun to play, the difficulty is well balanced (maybe the final boss is too easy but...I did not mind!) and the resources used (both graphics and music) are awesome and well organized.
I like this kind of retro games, and right now they are really a rare find!

Wow, thanks. I think this is the second time you have reviewed one of my games.
I didn't expect a review so early in the game's life cycle either.

You never know, I might use this engine sometime in the future to make a metroidvania, complete with a save / load / selectable item system to boot.

author=kory_toombs
Wow, thanks. I think this is the second time you have reviewed one of my games.
I didn't expect a review so early in the game's life cycle either.

You never know, I might use this engine sometime in the future to make a metroidvania, complete with a save / load / selectable item system to boot.

Hmmm yes I guess I reviewed a couple of rpgs you made, the fact is that I review games that inspire me (graphically and for the description) and I check LATER who made them... :)

This was good since I was able to finish the game with some difficulty (last level was challenging) despite not being an expecting action games (as said before I prefer rpgs). It's a nice system, clearly if you someday will make a longer game it will need more features and addition. Anyway... this was original and enjoyable.
Pages: 1