This was mild- with improving I would be so excited

I´ll review the 5 endings I completed out of 6. I´ll be brief:


The current game felt mild. As in, mild feelings, mild life lessons, mild experiences. But pick a direction. Do you want people to laugh with this, or to feel heavy emotions? Pick it and forge it, hardly, strongly, either a funny short game or one with touching memories that ´ll stay with you for a while.

I´ll offer feedback for the second style, since that´s the intended aim I perceive from the developer, and that´s the one I consider myself good with. If I was wrong, nevermind me.

She leaves much to be desired.

First of all, why 'Shadow Witch' when nothing about the evil deeds seems to be related to Shadows? Wouldn´t it be more logical to call her Nasty witch, Evil witch, even Novice witch. Her background and motives too, while pointed out at the endings, remained unimportant and unclear most of the time.
Show

Yes, so she wants to become something like a "Professional" witch. But why? Did she set that as her goals? She could use a diary or some hint in her room, then. "I want to be a witch! I want to be the best witch in the company!" And why´s that? "So that I stop being useless and looked upon, everyone will fear me and respect me!" It´s not like you need to write just that, but give hints about it. I could see the Shadow witch was quite a boring person, with little friends, with a sad life even, but see no reflect on that, I don´t see it paining her deeply, so maybe she doesn´t care that much. If she were to cry about it, to feel anxious and heavily depressed throughout the game, I would feel so much more connected to her. 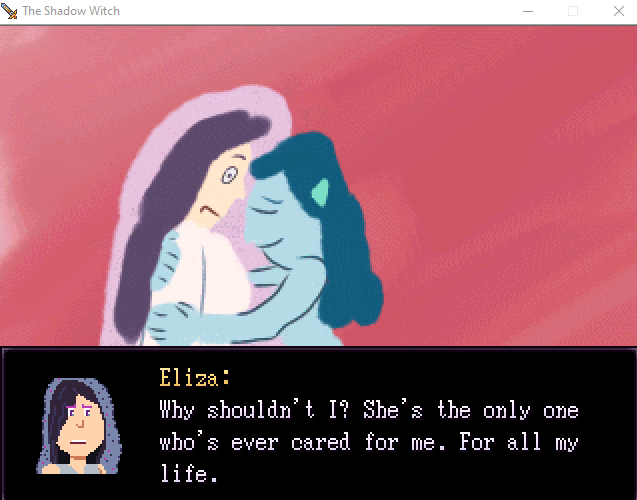 Yes, that!! But that was too much of a 180° turn and just at the end!! I knew your life was boring, but not that not even your parents showed you affection and that you get so easily entangled to strangers on the same day you met them. Get me some hints pleaseeee

And the ‘Witches company’ (to call it on a certain way) could use so much more background. Say, it´s an evil place/enterprise! Because we aim to be evil, of course! So the novices work themselves to the bone, they bear the brunt of doing evil things, do unhappy jobs! EVIL! And there you get a reference to bad companies nowadays, that make their workers unhappy, for example. And then you´ll feel more empathic towards the Shadow witch.

If you want more realism, try that instead of just let it be a particular person´s fault (her boss). And in one of the endings where the Shadow witch gets killed for no working, that´s cartoonish I believe. Make her demoted to a slave instead, for example.

Currently there´s little to say about the characters, as they are, mostly, monotonous and predictable. Now that´s not a problem since it´s such a short game, but minimun changes would offer good differences, and they have soooo much growing potential.

Show
The dwarves where all equal, in face, shape and clothes. A small change like different colours on their shirts would definitely make the tavern livelier, and some of them drinking heavily, maybe even drunk, would talk about their different personalities. Let´s say some had a heavy day at work, some are heart-broken, some are just not in the mood to drink. How is this any different from the current game? Because the current dwarves have dialogues, but no lives, or at least the kind of mood you expect at a tavern (besides fantasy/adventure ones with quests and rivals and whatnot)

Now, on this remark, the fairy was quite fun to talk with, because she reacted how I would expect a fairy to react “My candy bag got eateeeen! I trusted you! baaad human!” I actually felt bad for her! It was like bullying an innocent child. But both the old man and the kitchen lady were like “I´m angry, I´m storming out, see you never again” Which was repetitive and somehow incongruent. I expect and elderly man to be disappointed and sad for the Shadow witch. And the kitchen lady to slap her because she put everyone in danger (and if she´s locking the kitchen, let the witch out!). Then, the witch, could reflect on those moments. I´m sad. this feels sad.

Soundtrack was simplistic. Did the job properly, no complains, but nothing to write home about either. The art in one of the endings was original, that I always praise, but really needs to improve if aiming to get empathic reactions.
Show 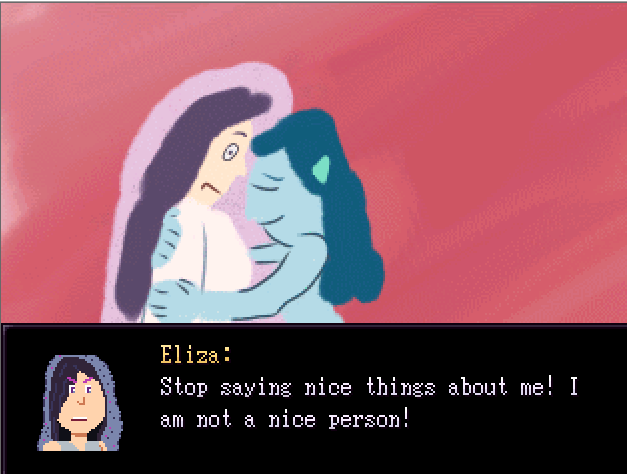 It seems a distance-hug…something like a hover hand? Hover hug?

The mapping could improve a lot. Like, a loooot:
Show

-Why her room and many other places have earth floor and walls? Closets and tables and chairs on bare earth.
-When getting to the other places from the, let´s say “hall”, I believe portals would be better. Because it doesn´t makes sense to me that she lives in some sort of mansion where one door leads to her closet and another to a public tavern.
-Why so many spears? How about trying something related to witches, like different types of brooms? Though the flour sack, I liked. Dunno why, was somehow comical.
-Oh and having the same books (that we´re searching for) in the library is kinda boring/too easy, ain´t it? how about a longer route to get them, like hinting that some books are borrowed from the library and finding them in other places. Like a drunk dwarf reading the fairies book and exchanging it for something.

Please check RMN´s tutorials, articles and stuff for that. We have a lot. This one, for example
https://rpgmaker.net/tutorials/1343/


Overall I know I was harsh, but if this protagonist were to be given proper background and character development, I would definitely play it again. If I were to see her getting so emotional, so frustrated, so relieved to find a friend, how could I call that wasting my time?