The Alchemist and the Owl

The Alchemist and the Owl is a short adventure that shows some interesting concepts: rather than playing the usual hero, here we play as an apothecary (Claire) that also runs a little inn in a forest near a village called Fendol, with the help of Haephestus, an owl. The entire story consists in helping adventurers and peasants crafting and delivering the potions and medicines they need.

This game is rather short and simple: we have to collect items from various sources: plants and herbs are found in the forest, venom is taken from the snakes (duh!), water from a lake and honey from the bee nests. Other items like coffee and the feathers (to create the famous Phoenix Feathers of FF games) are bought or obtained doing some sub-quests. The owl will also help us to bring the ingredients at home, where you will also find three books: the red one gives the crafting instructions, the blue one is used to save the game, and the green one is helpful because it gives some hints about what you should do next.
Oh, and besides the "main quests" there are also some optional (and in a case repetable) quests to earn more gold and resources!

We also have the option to set the prices for the products we sell, and I admit that without guidelines I was too generous, anyway this was not a big issue since the game is rather short. But pleasant! 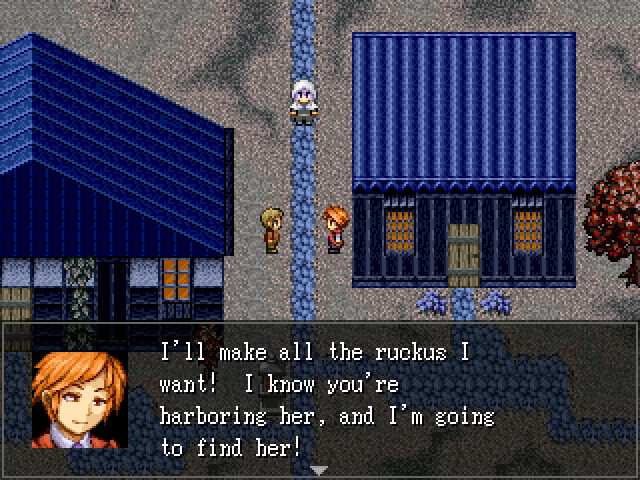 I guess that this means trouble!

Yes, pleasant, because music is evocative, graphics is good and resources come from the White Screw collection. Mapping is pretty good, simple but effective, I like the colors used, the story takes place at night so the use of cold colors (mainly blue, purple and grey) are nicely contrasted by the yellow/orange of the lanterns and dark red of the trees. Nice!
I also liked the custom menu and crafting system, even if you have to get used to it, because for example in the beginning it was not very clear how to distinguish the items I was carrying from the items left in the closet. I also do not know if it's possible to waste all the resources making useless medicines instead of the ones you need, anyway this never happened to me.

Ok, so the story is nice and the characters are well characterized despite the shortness of this adventure, but is everything perfect?
Unfortunately there are a couple of bugs that may pop up like the Owl Summoning bug and the game breaking Door Glitch. Other issues may be the menu that pop ups also in cutscenes if you press the wrong button and the "disappearing customer" issue. It's a pity that there are these small nuisances since the concept and execution of the custom menu and crafting system is well implemented and quite interesting.

Verdict
The Alchemist and the Owl is a small pleasant adventure, clearly made in few time. but with some nice features (the owl, the crafting). Graphics and dialogues are nice and well done, and despite the bugs that marred my playthrough, I think this is still a charming little story with a nice atmosphere. 3.5/5 for the innovation!

Close
03/01/2020 02:29 AM
Thank you! I saw your post about the disappearing customer and was going to respond, but I forgot. I never did figure out what caused the door glitch. I just have no idea what triggers it. Also, the menu pops up in cutscenes? Uggh...
Are there particular cutscenes this happens in?
TheRpgmakerAddict

author=pianotm
Thank you! I saw your post about the disappearing customer and was going to respond, but I forgot.

I do not know, it seems that the customer appears outside the map in the upper-left part of the screen even if you give him the extra items. Then he disappears. So it's ok, if you want I've even a savegame of that exact situation...

author=pianotm
Also, the menu pops up in cutscenes? Uggh...
Are there particular cutscenes this happens in?

Well yes, it happend only once in the cutscene of the first pic I posted here.
(I was trying to make a screenshot)
Pages: 1