Hey there, just making this short and sweet. Going to be needing some testers for Phantasia VX really soon, and could use a body or two to make sure everything flowing properly. If there are any volunteers, be sure to send me a PM.

Hey there, Jaymonius here with some more Phantasia VX information, and plans I intend to implement into the game! :D

At a point in the game, you will unlock sub-element. Which will allow your heroes to learn new spells and passives! (If you played Phantasia Remake, it will be at the point where you will obtain the Element Orb.) 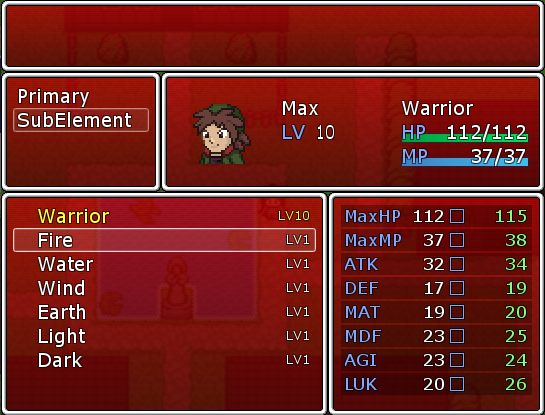 Each of the elements will be like a class each hero can go to. And then when fighting under that element, you will eventually learn new spells and passives.
Each element will have its own focus on certain roles, such as buffs, debuffs, damage, etc.

The spells, skills, or passives you learn will also allow you to equip them. However, you can only equip 8 spells, skills and passives at a time. So choose wisely on what you want your heroes to learn, and what you will want to assign them as. 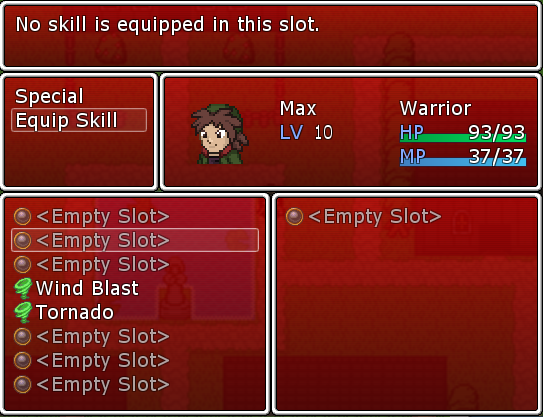 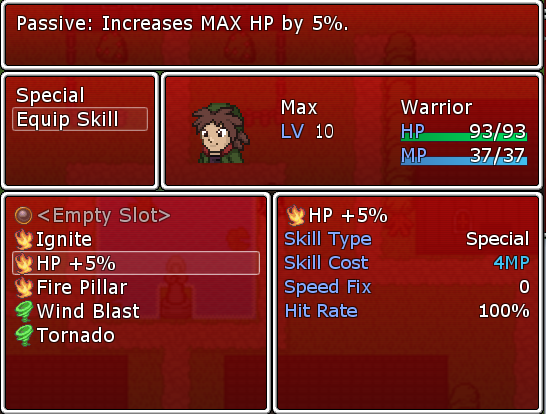 While the heroes will learn spells and passives through the Sub-Element system, they will also learn their own EX Skills that they will possess alone and can not be learned by anyone else. Also, each spell/skill will grant stat boosts as if they were like equipment!

It may feel limiting in terms of being able to use only 8 spells, skills, and passives. The enemies will also have to follow these rules as well. So you won't have to worry about enemies having a large skill pool. It'll make it easier to learn their attack patterns.

What stuff you learn is still in a major development, but the groundwork has been laid out. So it's something to look forward to at least.

Hope you enjoyed what will be in store, see ya again. :P

Hey there peeps, mostly just an update as to some who may be a bit curious as to the pacing and progression of the maps that are being done. To those who are familiar with Phantasia1/Remake, I'm nearing the end of the Argus arc. And with the recent screenshot I uploaded, you will actually be able to visit the city, as I'll be adding an additional plot point to further explore some character's backstories, etc.

But anyway, in terms of maps done, I'm actually almost 70% done all the maps needed for the game. Once all the maps are done, spirting battle animations and character sets will be coming next. So yeah, that's about it in terms of progression.

When will the project be done? Who knows. Though my pace on this project during the past week has been pretty good though! ^_^

Ha ha ha, what sort of nonsense is this? I'm remaking a game I remade back in 2005. But that was over 15 or so years ago. Soooo... why not make the game with a more refreshed mindset? No more rips, and more originality. (Well, with P1's case it may be a bit tough, for a few things will definitely have to be changed for sure, haha!)

The game design is mostly mapped areas at the moment, and I have battle scene already made, but I haven't made battle animations, I do have some monsters made, and I'm not making it an OVERLY flashy battle system.

It's something I noticed over the years. Sure, the characters would have some super flashy skills, but over time they would get abandoned in part of some new fancier skill they could just spam, and the cycle would repeat until the end of the game, which would just end up making the battles stale.

So I definitely want to make less emphasis on super flashy skills and went back to a more basic mindset. BUT, I may have one fancy skill for each hero, like a EX Skill or something, but it'll be more one major skill for each hero and the rest will be the standard.

Characters will definitely get some more attention, some who barely had some will need to get some more spotlight shined on them, and flesh out the backstories on a lot of the characters. The character roster won't change from PR. So that will be good. Plus I'll be making some moderate tweaks in terms of how the game's progression will flow taking nods from both the previous versions.

On the note of no more rips, each of the tiles was made by me, so it also means when they're made, I immediately check the tiles and make sure they are done right so no tile errors, and I know some of you will be leering with thet expectation of THAT to arise eventually. But maybe one will slip... who knows. Ha ha.

It was thanks to Arcanion's development that helped me better my spriting skills in making tiles, so I thought I'd try making the entire P1 game making everything from scratch, from the sprites, tiles, and monsters.

Keep in mind though, this isn't a priority project, it's mostly something I'm doing as a side project while I'm waiting for other things to be finished on Arcanion and Phantasia 6's side.

Well, be sure to check up on this one every now and then. I may post a few screenshots every couple of months or so.
Pages: 1