Antigone is asked to display her clock as the center piece of an exposition, bringing about technical issues and emotional distress. For which she typically garners Vincent's help.
But when Vincent goes back to his apartment, he finds that his keys are gone, and the doors were unlocked. As he inherits the issues and distress, Antigone now must provide the help.

Let's do a proper presentation this time. 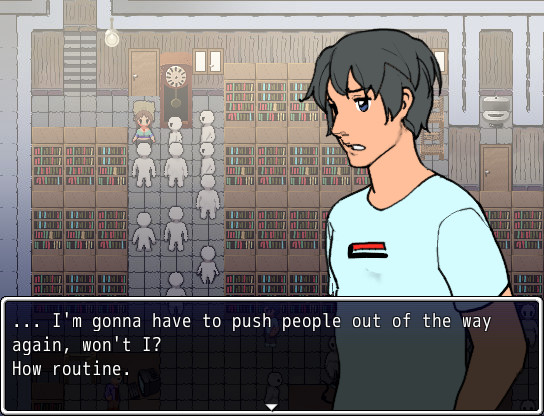 If you've played the previous games, this one is the chronological sequel.
Although playing the previous ones isn't required to understand, it helps understanding the character development.

The graphics got a fully custom update, and the animated portraits are still here. The game is still the same kind of puzzle-ish visual novel, this time with a mystery oriented plot in addition to the slice of life core. 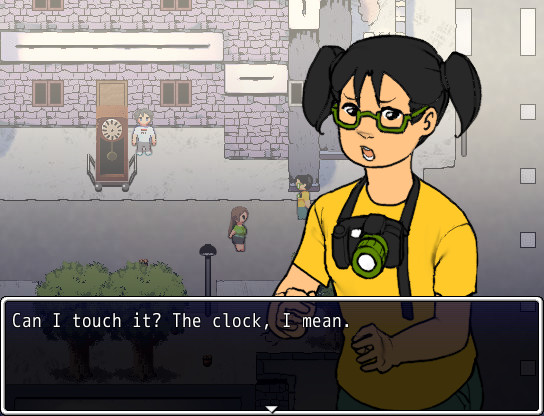 The series sees the introduction of several new characters, but the focus is still on Vincent and Antigone, and the romance side of things gets developed too. I'm mostly expanding for the future, the main focus didn't change.

After watching Hank Gaming's playthrough, I fixed a few things. Nothing major:

- some English mistakes
- a couple faulty flavor text events
- and Clara's coloring issue. Poor girl, she has one portrait per game, and I manage
to fuck it up; so I made an exception and patched it. 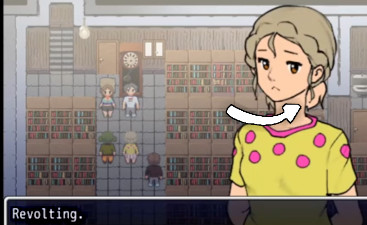 Close
03/10/2020 04:20 PM
Hey! Finally! I played this & I looooved the development and the dialogues!! I liked the mystery solving part of it..
Although...
Show
I kinda thought the motivation for the suspects to actually do all that stuff was a bit far-fetched. For the landlord to be even involved in such a scheme was kinda nosey and as for the friend, he went to such great lengths for a such a simple thing. I mean I would have just locked them in a closet or something :P

But, awesome game as usual and looking forward to the next one!! (Great! now I have to wait extra long coz I finished playing this sooo quickly!! :P )

P.S: I didn't like Antigone's extra THICC and bouncy map sprite. Not fair to the other girls in the game :P
Zorga

Close
03/10/2020 06:26 PM
(These and Eevee's are pretty huge spoilers, please nobody click mindlessly:)
Show
Oh it was far-fetched alright =D that's how they realized it was a sort of game after all. It was all about stress and overreaction, not just getting them to fuck.


I'm NEVER apologizing for Antigone's bouncy graphics, never! I shall even embrace this unfairness as part of the plot.
Glad you played though, and flattered you did so so fast. Don't expect a new one too soon, they're increasingly harder to make xD
NoBody13

author=NoBody13
Im definetely gonna play this. I remember i really enjoyed the first one.


Great =D did you play the second one too?
skylarxz
0

Close
03/26/2020 10:47 PM
Hi! I just finished playing the 3 Sweet Middleground games. Actually, just the first and this one, I gave up on the second after that chicken. I actually had a lot of complains from the first game, but I thought the other games would be improved. And it did, I was actually surprised to see animated busts. Never thought about usig it like that. It seems like a lot of work to do, and it is amazing. Also, the drawings improved a lot from the first to the second game. Said that, there is only a few things that kept bothering me during all of the games.

1. There are some lines that are not useful to the overall story and neither to the characters itself.

2. During the first game, I thought of it as a walking RPG because the player has to walk a long way to do simple stuff that wouldn't even affect the game. This happenned less during the 3rd game, thankfully, but still I think you should be carefull with that.

3. I liked the graphics and animation from the second game, but the third one was kind of weird. It isn't bad but it could use a lot of improvement. Some of the tiles and the sprites doesn't seem to fit together. It just seemed like two different graphics mixed. The characters sprites especifically seemed like it was made by a totally differennt person, it didnt fit the map at all.

Aside that, I enjoyed the games. I thought the mystery was kind of cheesy, but Antigone is cute and I liked the characters interations. I love the illumination of the maps in this game too. If you make a fourth game of this series I would totally play it!
Zorga

1 - I understand where that's coming from, I do like embroidering randomly. I'll be careful to not go overboard, although... Let's be honest, I won't part with it completely =P

2 - It was. In fact, I'd say all 3 are, to a certain extent. My efficiency will grow with time, but here again, I think the series will always stay fetch questy.

3 - You can say that again xD these animated portraits are more than half the work, just by themselves. And you're right, the first two games were a mix between RTP graphics, and my own work. (yours truly is still a beginner)

I'm grateful, really, (especially for the "Antigone is cute", that's the very best compliment of all) and rest assured that the series will continue. I just like these two too much~
HankGaming
0

Close
06/28/2020 09:38 AM
This game is overall good and, I wanna announce that I have my own gameplay posted on YouTube and here is my playlist: Sweet Middleground 3

Thanks for this amazing game ^^
Zorga

author=HankGaming
This game is overall good and, I wanna announce that I have my own gameplay posted on YouTube and here is my playlist: Sweet Middleground 3

Thanks for this amazing game ^^


Ooh, I'll definitely be watching this =D thanks for both the effort and the compliment~
Maltea
0

Close
08/08/2020 08:47 PM
Why don't you publish your games on itch.io? You have a great potential and could do well with more exposure there.
Zorga

author=Maltea
Why don't you publish your games on itch.io? You have a great potential and could do well with more exposure there.


Unfortunately, I am extremely bad when it comes to obtaining exposure ='D. I've vaguely heard of itch.io, and I've been made to understand that even being slightly visible is quite hard there. So I haven't considered it.
Irog

author=eevee93
I didn't like Antigone's extra THICC and bouncy map sprite. Not fair to the other girls in the game :P

I had to look this one up: THICC

I think Antigone has a great body type with good proportions (unlike many anime girls who are skinny but have oversized feminine attributes). The game shows her struggling with the resulting unwanted attention. This contributes to make her a realistic human facing real struggles. Also she is very cute. :-)
Zorga

Advertising 2 : i know the author, my note will be not objective

So... What can a said the other players didn't say ? No... let's begin by the essential.

I'll not telling about the actual who dunnit in modern TV show you know, where the evidence presentend at the last time during the arrestation that would be annoying, no.

What is interesting in a good who dunnit ? The game, when the main protagonist telling the truth you are like : omg he's right ! I had the evidence on my eyes ! That style of games. This game successfull.

But... that's not the only reason why i loved this scenario. That's an other reason. During a long time, i was not fan of romance. Now, i'm not today. But today i think i can like, and analyse their elements. And this game, or story.... Definitly this story, had successfull combine the both, romance, and who dunnit.
Why ? Because as player (or reader), i can't during the investigation separate the two part of them. Why ? Because i played the 2 stories before, that last was interesting and good, two good story (and not game to me), So the clues are inclued (for a minor, but important part) i wasn't able to ignore the relationship between the protagonist.

So... Let's talk about them. For resume, i'm jealous about Vincent, Antigone is a good person well writed, and sexy. But finally I'm not jealous about Vincent because he have the quality to grown up up Antigone. This duo, this couple is successfull (like all Zorga's couple... except for la revanche, maybe i don't know). Not only, the 2nd characters are adorkable. But's that's not important.

Why This third game was good ? Because the equilibrium. Lot of who dunnit sacrifice a part of character for the question : who is the culprit ? Or lot of romance author sacrifice the who donnit part for the love.

That's not here. The both were equilibrate, plus, they combine. I can say you can't resolve the enigma in the game before the protagonist if you can't empathize with them. That's a important part.

I'll pass the graphic part here. That was a good work. You have the impression of level up in graphism, we have animation bla bla bla that's good. No contest.

In the end, i'll describe the negative part. I'm french asian and i didn't like the asian fan part's. Not because she's asian or... Whatever... That's like ocean, a caucasian. Not the problem is... We don't know at the end why their was not here at X moment and why they were here at X moment... That's miss at the end, but that's not important, but it 'important for me to reveal that fact, some explications missed.

So, first, of course, thank you for the whole thing. Getting this equilibrium was of course my goal, since I wanted the story to both hold its own as a single game, and contribute to the general romance of the series. I'm glad to know it worked out.

Regarding the part about the asian fangirl in particular, (spoilers)
Show
I'd even say it's something that can be said about other characters, or other elements. I didn't quite use everything, there are some red herrings around too. But it's a series, and I assure you this girl, as well as other stuff, will contribute again in later installments.

Thanks for the comment, I know it wasn't easy to write up.
Pages: 1