Not too terrible but as barren as the wasteland

Star! This game is about the adventures of Frick, a young long haired blonde man that wakes up in a strange world after three men (that are controlled in the prologue) rescue him from a sort of hi-tech vault. It seems that a post apocalyptic disaster has transformed the world in a barren landscape where dangerous mutant animals attack the survivors and sunlight harms humans.
But our protagonist Frick wakes up with new ugly mustaches but without his loved sister! His quest will be finding her, of course.

Star (chapter 1) is a typical old style jrpg with lot of combat, dungeon exploration and some dialogues. The party costantly changes and items are found inside crates and vases inside the dungeons: the crates contain equipments and the vases gives consumables that are also bought from merchants. Feral beasts when killed leave animal parts that can be sold to buy consumables. This is more or less everything... oh wait, you can also rest and save using any bed and change difficulty when you feed a cat (!). So this seems good, isn't it? 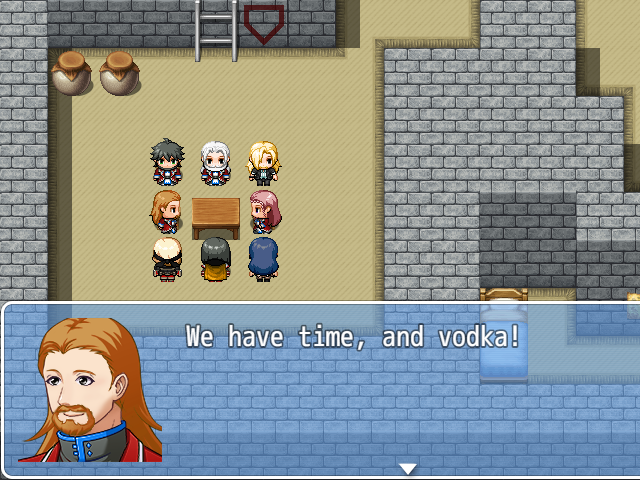 For some reason a lot of time is spent drinking with survivors in the shelters!

The Bad
Unfortunately combat is quite intensive. I can tolerate the presencd of good old random encounters, but in later stages I was quite bored by the frequence, also because of the quantity and strenght of the enemies! The scarce quantity of consumables and weak party members (Chrigel is a pathetic healer and fighter, Rene' and Robse are strong warriors but they often misses... ans Frick is mediocre at best) that often missed the attacks were a real pain, not to mention that the enemy hordes had a lot of special abilities and resources.
Ok, I played and reviewed other games with big dungeons and hard combat encounters, like those old classic games made by Yeaster, BUT at least there you could save anytime and anywhere! Here if you are unlucky death means that you will have to lose a lot of progress, not to mention that running away often does not work and not that means that one character skip his action, but ALL the party lose his turn!
So I tried to lower the difficulty setting... BUT it seems that this only varies the quantity of loot in the dungeons, not the strength and number of enemies.

Dungeons are for the most part just large and empty mazes with some loot around... you will probably want to exit them as soon as you enter, even if rarely some of them contains some helpful Npc or optional secret enemy that will net a special weapon or item.

Other problems with this game are some untranslated text (the descriptions of some abilities and items too) and an extreme linearity. On this second issue I'd have no problem if it wasn't for the lack of options to form a party: characters always switch without many explanations (the idea is that you get to play everyone, but then I find useless to grind if I'll lose that party member later), and I also find some situations rather strange: two survivors separates from the rest and warn others not to tell anyone where they are staying. Then other people find the place and they... are happy? So why all this secrecy among friends? Frick was forced to do everything they asked him (find a guy, rescue a stranger... but why?). It makes little sense but uhm... ok! But there are some other little inconsistencies and people that suddenly have change of mind or act in unexpected ways.
The problem is that while setting is particular and interesting, the adventures of Frick aren't particularly exciting or interesting. Just a wandering without much explanation. Uh, ok! 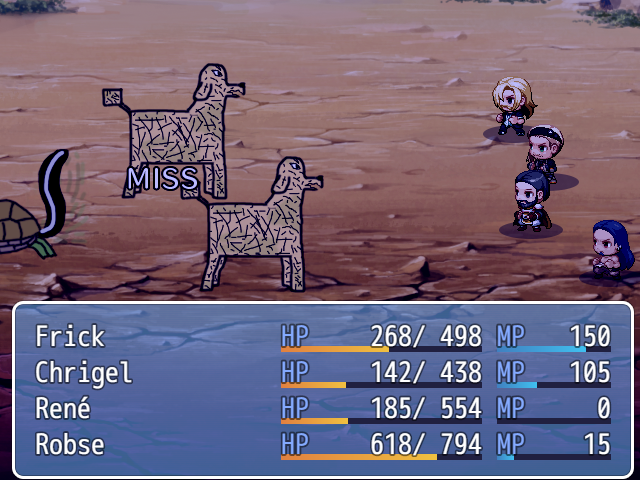 The Good
Luckily there are also some parts I liked a lot: for example the flashback about the adventures of Frick and his sister, the part of the house on the tree and other parts are quite interesting and well done (at least these aren't like those dreaded maze like dungeons!).

I also liked the setting: weapons are all named and unique (there is no generic "iron sword"), monsters are all original (I think!) and some are hilarious, like the wolf-potato that gives potatoes when killed and looted! I also like the mystery that surround the "new world" about the trees, shamans, Pures and spirits. It's original and peculiar. There are also mysterious magical items, fetishes that unlocks special skills, and this is a godsend considering that most characters, except shamans that acts as healers and mages (and are physically weak, of course), have usually no skill besides the base attack!

Music was pretty good too. I liked the different music during combat, very atmospheric and original.

Verdict
The first half of Star is really good! When monsters are weak and you start exploring the world, despite being it rather barren and not that interesting, it's a pleasant adventure with some nice touches. Later dungeons instead become a chore, and story is a bit lacking, just an excuse to travel around. The lack of save points is a real issue (do you think you can save on the world map? Wrong!). Also sometimes indications for the destinations are not clear and the world changes as new paths open while others are blocked (it's weird, you could have simply a dialogue like "This is not the right direction" and an invisible block, and it would be more practical!).

Unfortunately I have several problems with this game, but to explain in few words, it lacks on the "fun" department. I began interested and willing to play it, but it became more and more boring and dull and there were not great rewards for finding and defeating the hidden bosses. The premise is good, but the gameplay was lacking, I would have liked more dialogues, scenes and sections like the flashbacks, because dungeons become soon boring and annoying.
Star unfortunately gets a 2.5/5: despite some good features and qualities the gameplay and story are a bit lacking. Could have been a lot better with easier, shorter combat encounters and more save points. A lot!
Well better luck next time, then!