A Game about Killing Slimes with a Bear

Intro
You are a bear. A normal bear. One day, someone came out of nowhere and gave you intelligence. He asked you to kill the slimes that are invading your planet. Strangely, you decide to do what the man said without question. Bio-Me lets you control a bear that is given a noble mission to kill slimes and save the planet.

Graphics
If you think that you're going to play the game in 2D because it's an RPG Maker game, you're wrong. Bio-Me uses 2D sprites that look like 3D; you can rotate the perspective up and down to see better of your surroundings although sometimes some objects become invisible because of the weird asset behavior. Some objects are plain 2D objects placed in a 3D plane while other objects look like a paper-made object that was made to stand in a 3D plane - the only thing that is actually in 3D is the wall block. The slow loading time also doesn't make the presentation to be worthwhile - I'd rather stick playing the game in 2D.

Story
There isn't much to the story. The game has a prologue, which I had a problem in understanding the dialogues, and a few collectible letters that you can find throughout the game. The letters tell the background of the man who ordered you around which doesn't seem to be important, especially since it doesn't have anything to do with the prologue. Moreover, the text moves too fast when you read the letters that I had to read the letters several times to read everything. The ending is also disappointing since there's nothing special in it. 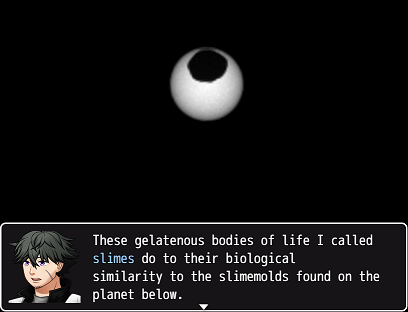 Sorry, what were you saying again?


The Game
Exploration
It might be obvious from the game's intro that you'll only have one planet to explore. The planet is actually a dungeon-like area with 4 different regions which require 4 different skills to access each region. Tree-burning skill, a skill that is obtained at the start of the game, will allow you to burn any trees that you can see, accessing the first region and burning optional trees for items. Chests are also scattered across the dungeon and will give you items or new skills that can be used to access more regions. I had fun re-exploring some regions to make sure that I didn't miss anything.

Battle
There is a combat tutorial near the start of the game that you can access. However, it still took me some time to understand how the battle works; you need to hold the action button whenever the screen blinked in blue color to attack. Battles are not turn-based - it's rather relying on your ability to hold the action button. If you do everything right, you'll have a chance to hit an enemy. If not, you'll get hit instead. There is also a chance that the enemy will not get hit; it might run away or suddenly attack you instead, dealing you damage if you're unprepared.

If you think it's easy to kill enemies, you're wrong. Agile slimes have a high evasion chance - you might have to hit the enemy 10+ times before killing it if you're unlucky. Killing enemies also become boring and repetitive at some point since they only give you potions and EXP, which is useless since leveling up doesn't heal your HP and you can always 1-shot the enemies. The game also introduces the concept of backstabbing, which I found to be useless, since it's used to deal triple damage and almost impossible to accomplish with the fast-moving enemies.

Puzzles
Some areas have rock-pushing puzzles that you can solve. Some are optional to solve, some are not. However, you can't reset the rock position if you screwed up, making it vital to always save before solving a puzzle. Puzzles are challenging - it took me a few tries to solve all of the mandatory ones and I still couldn't seem to solve some optional ones to get all collectibles and kill all enemies. Those puzzles might be impossible to finish though since I found some that are designed that way. 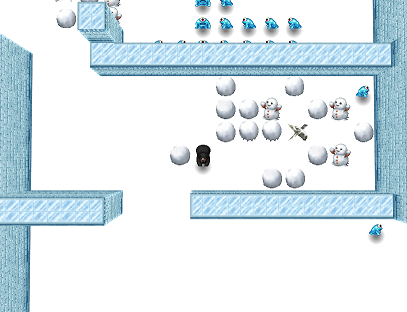 Time to give up on that slime since I messed up with the puzzle.


Aside from the puzzles, there is also a riddle that you have to solve to finish the game. The game has 4 nonsensible hints where you have to figure out a password from, which I couldn't seem to crack even after brute-forcing some words. I ended up giving up and asked for the solution in the forum instead.

Cons:
- You can't reset puzzles
- Battles become boring and repetitive
- Backstabbing is useless and almost impossible to do
- You must solve a riddle that is hard to figure out to finish the game

Final Rating: 2/5
The mandatory riddle shouldn't have been there. The game becomes impossible to beat unless if you're the developer. Honestly, I expected that there will be more enemy variations in the game to make the game interesting. The only thing that I enjoyed from this game is exploring the area and finishing some puzzles, which soon to be ruined by the slow loading experience. The game clearly needs a lot of improvement at this point.

---
Bugs:
- Sometimes I got double drop after killing an enemy.

---
Suggestion:
- Change the intro text to be more understandable. My suggestion:
Show

Were you looking at the sky when world scientists said that something will pass the planet?
They said it was a meteor on a near-miss path, but it wasn't. It was Biome-08. I had built 9 orbital biomes by the time Biome-08 had been spotted.
It shouldn't have been spotted if not for the strange appearance of a previously unknown lifeform.
These gelatinous bodies of life whom I refer to as slimes have biological similarities to slime molds found on the planet below it(?).
They had gotten into the navigation systems and, seemingly by chance, altered the orbit of Biome-07(8?) to the moon eclipse.
Sometime later, as a result of the slow decay of Biome-08's systems, these slimes were discovered.
Since I'm the only one who knows about the biome's existence, and since I was fairly busy with other things...
I decided it was necessary to get a little help from Biome-08's inhabitants.

I decide to visit the planet and get to work on getting a helper immediately. (this sentence is still a bit off but I don't have any better idea)

Close
10/26/2020 03:59 AM
Thank you for playing and thank you for your review. This game was largely for testing concepts for my next game.

Let me clarify the battle system. Slimes always die in a single hit - they have no HP. The direction determines chance of evasion. As far as attack goes, attacking from behind means you have 3x greater chance of hitting. Similarly, leveling up increases your ability to hit.

As far as defense goes, direction determines the amount of damage a slime can do. If a slime attacks from the back, it will do far more damage than if it attacks you head on.

Slimes do become more difficult the further you get in the game, but there are also three items which help.

Puzzles should reset whenever you restart the game, though I understand the problem with the long loading time. I don't have the same difficulty with the loading time on my own computer. There is a new version of the script which may improve or fix it.

I will certainly fix the typos.
aquatorrent
5461

Close
10/26/2020 05:10 AM
no problem! i don't think there's a mention about getting a higher chance of hitting from the back, although it still becomes an issue since slimes tend to move too fast (and i will be too lazy to do it as i progress further on the game, since it's just a matter of time until the slime is killed). there are also cases with a room full of slimes that makes it impossible to execute.

i don't think puzzles are reset after the game are restarted. i might be wrong though since i didn't think about it that much. even if it does, i still need to reset the game and wait for the slow loading time, which is also an issue.

thanks for making the game btw!
Pages: 1