Heaven's Gate was made for Theme Roulette 3, the random word Marrend received was heaven, her Pal-Let's Make resource was a character design. The character design was incorporated as one of the party members you control, as for the word heaven, it's in the game's title and I guess right at the end of the game you go somewhere which could be described as being in the heavens - maybe. I couldn't get the image she received to load, so I don't know how that impacted the game. Anyway enough background about the game.

The story of the game is fairly straight forward, civilisation as we know it ended in a catastrophe. However a small number of people survived underground, and now ages past, your small group are tasked with investigating the surface and looking for a suitable place for the colony to expand. Also you have crystals to aid you, they fully heal you and provide a fast travel network, however in order to activate them you will have to overcome an encounter. So you explore and activate crystals as you go. There is a bit of development at the end, perhaps a hint of what caused the catastrophe, though it's left vague, and I don't want to spoil anything. I did feel like the premise and gameplay loop could have supported a bigger and longer game, I felt like the game hit its stride just as it was ending, I was left wanting more - which is always a good thing when you finish a game.

As for gameplay, it's a simple pattern, explore, find a crystal, defeat a boss (mini-boss?), travel back to town in order to hand in any ore you found, and then upgrade your equipment. New equipment is unlocked by handing in said ores. Encounters are pretty easy, until the final boss, who with the benefit of hindsight was possibly more of a puzzle boss. Skills are tied your equipment, I thought you started with a lot of skills but by the end you have whole pages of skills to choose from. A lot of the skills felt like direct upgrades to some of the older skills for example; Slash (60 dmg, 8 MP), Braver (120 dmg, 16 MP), and Doom Blade (180 dmg, 24 MP). MP wasn't much of a problem, and when you're low you can just use MP recovering items. I think it would have worked better had the newer skills replaced the old. The game also features an encounter cancel system - I think that's what its called anyway. When you're about to have a random battle, you get an exlamation mark popup, hitting cancel aborts the fight. You can only skip so many fights at a time because you have a resource ECN, which depletes when you avoid a battle. I did find one issue with this system. 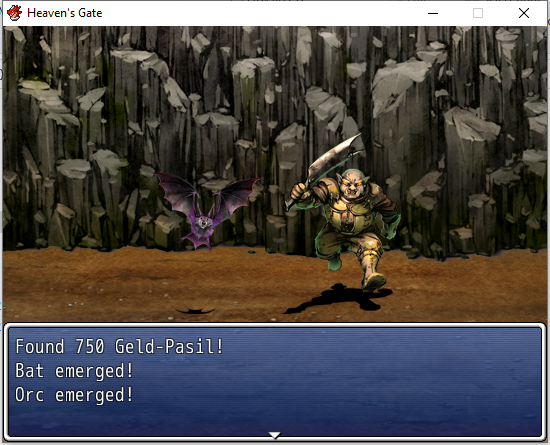 I was about to open a chest when the (!) popped up, and ended up opening the chest right before the battle started. I think I still got the money, it's a weird interaction. Ideally I guess, it would be better if you couldn't interact with other obects during the event cancel period.

Graphically the game is mostly RTP. I remember enjoying the music which was not RTP, I remember thinking it suited the mood but that's about all I really remember about it. I think that's just about everything I have to say about Heaven's Gate, I enjoyed it. My playtime from the post credit save was ~23 minutes but I died a couple of times on the final boss, so it took me probably nearer to half an hour. A fun half an hour, as I said earlier, I was left wanting more. Heaven's Gate is a fun little game and if you've got the time, then it is worth a quick playthrough.

Guardian of the Description Thread
19318

In regards to the encounter cancel system, I dunno if you ever played Wild Arms 3, but, the implementation here tries to ape that system. In that game, certain actions can cancel a pending encounter. These include opening a treasure chest, transitioning into a new area, and story-triggered fights. Speaking frankly, this game might just handle transitioning into a new area. With this game, I implemented a solution for chests, but not story-triggered fights as of yet.

If it is of interest, one can find the image that I was assigned for this event here, or in Illy's locker.
Fomar0153

Ok, no I haven't played Wild Arms 3. I sometimes iterate on systems I like for a few games, so I get that.

Thanks for the image, was just curious, feels like you got Frogge'd. Speaking of theme roulette, it must nearly be time again.
Pages: 1