Welcome to Meta City Heist.
In this game we play as CJ, an ex robber that is in trouble: a mob boss killed his brother that did not repay a debt and now he'll do the same with him if he won't receive his money! With just a gun, a leather jacket and the few items that can be scrounge around his house, our brave protagonist has to collect enough money to pay the boss... or to escape abroad!

Meta City Heist is a sort of puzzle/adventure game: to earn money you have to buy the right items (drills, explosives), hire henchmen and upgrade weapon and armor. So yes, in order to make money you *need* money! 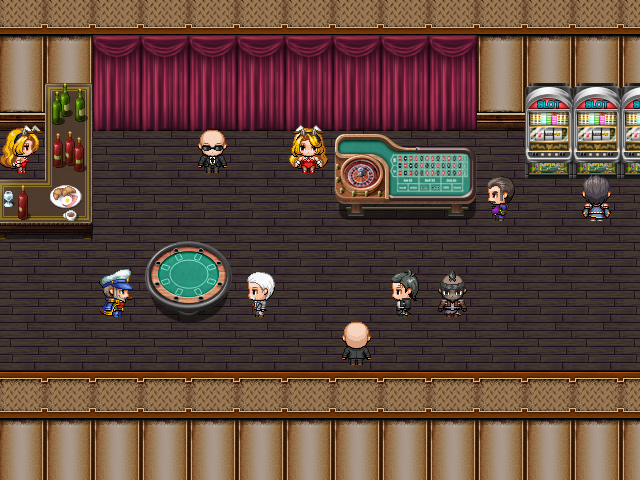 No plan, only glory!
Once bought the items that we can afford, we leave the house for one of the four spots that can be robbed (there is also the airport, but that cannot be robbed of course, it's for escaping!): a shop, a jewelry store, a general bank and a national bank (but there is also the casino). Each one can be visited and robbed only once (of course!).

The game is highly replayable since once we arrive on the location there are many spots that can be interacted, and depending on the items and companions available, there will be different selectable options.
Unfortunately there is no way to plan ahead because as soon as you visit the various locations, you will understand what you need to do the "perfect heist". Luckily, even if you do not have the right instruments, you can always rob the place in a more rough style, fighting guards and/or policemen and so on. After leaving the place you will get the *robber rating* for the heist, that can be *professional* or *gangster* and so on. Resting at home will heal the party.

Ok, so this is more o less the game, divided in two phases: preparation in the house and action on the location of the robbery. It's a simple and well done structure, my only problem is that it's impossible to predict the items you will need, and the second time you play a location you will probably find all the solutions and options available, but it's not a terrible flaw.

Combat is classical, but do not expect to possess particular skills and special abilities, you can just attack and use items like grenades. There is not much strategy involved, and that's due to the realism of the setting, you can't expect to win against four guards if you have just a gun, but if you wear a bulletproof shirt, wield a machinegun and have friends the result will be clearly different!

Graphic and sounds are good, nothing overly original but at least there are some custom resources that well merges with the rest and fits the realistic modern setting, that is a real rare occurrance for what regards the Rmk games. Maps are ok, a bit simple, but since this is a short game we do not need anything else. 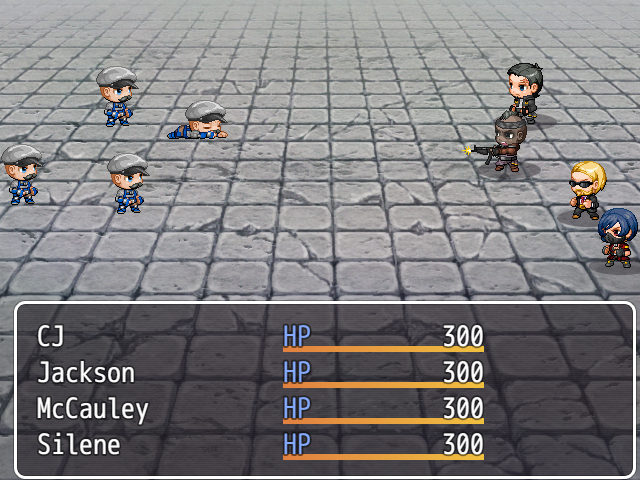 The crew is under attack, but we won't surrender!

Final Verdict
Meta City Heist is an original short game with many clever ideas and few flaws, like the presence of characters of no dialogues, the lack of something more (more story, items, heists, locations). There are also some weird situations for example when my character enter the air duct in plain view (and behind a guard) just because the accomplices hide him... well it was a little unrealistic compared to the rest!

In the end this is not a bad game and it surprised me with some hidden and optional things, like atm machines that can be raided and an extra secret heist that have to be discovered. It's a rather short and simple adventure, even if the last heist, the National Bank, is a really dangerous objective that will require resources and planning to be completed (warning: swat operatives are overpowered!).

Meta City Heist is an interesting and original idea, it's not a game that you will play for a long time since it's good as long as there's something to discover, but it's well done, professinal and also updated (the persion I played was not the last one, and despite I did not find bugs, last one clearly introduced some improvements). This game gets a 3.5, it was fun for what it was but it left me wanting for more!

author=MetaReaper
Wow thanks for the review! :D

It's a simple but original concept. I liked the idea and the characters' facesets, sprites and battlers were cool!
Pages: 1