Meta Revelations : Armour of the Abyss


Battle Mode System:
Adena can collect up to four different Battle Modes. These will allow her to configure her armour into different shapes in order to promote a particular stat ability. Think of this like a light 'Job' system from the Final Fantasy games. She can become potent in magic, melee or defenses in battle - whatever the situation demands.

A Unique, Hand-Tailored World:
View the world of Eden through custom tilesets - allowing for more imaginative and evocative scenery.


A Cast of Uncanny Friends:
While Adena fights her cursed armour, she is accompanied by two allies to help her along the way. They are:-

Everis Mannington
A human medic of a notorious high rank known as a 'Zeon'. These medics mask a history of agony and in operation wear masks to symbolise this as well as protect them from the new plague called 'Microdeath'. However, Everis has a fun and outgoing personality, greater than any woman Adena has met in her life.

Aubright Gold
A Raven boy too young and innocent to be ready to see the harsh, brutal world for what it is - but is moved to locate his missing mother. Like his last name, he has a heart of gold and is exceptionally modest and kind. Adena and Everis are hesitant to allow him on the adventure at first, but he more than proves his worth through his smarts. 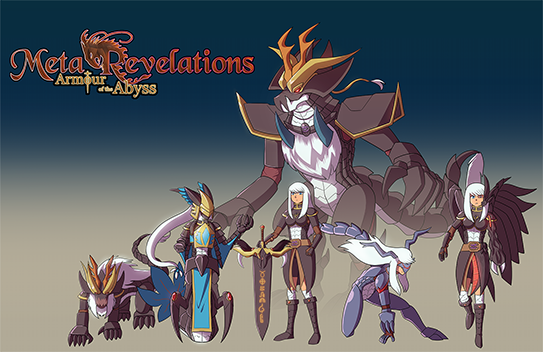 In Armour of the Abyss, the titular armour is one of the many focals of the story. I'm going to use this as an opportunity to explain what it is, what it does and how each battle mode exists. There will be two more that are not shown in the banner, and I'll leave it up to you to discover them on your own. In a separate article, I'll cover some of the 'enemy Crestlich' - those that Adena must fight during the course of the story.

In Adena's childhood, she encountered a statue of an abandoned, forgotten Daeva. The young Adena, upon placing her hand upon, feels a resonation with the statue, due to some very particular circumstances lining up. Besides this, Adena lives out a good majority of her childhood and teenage years without effect. 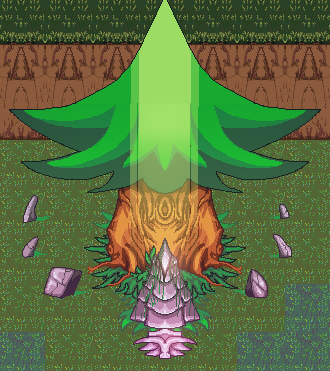 Adena eventually becomes a Crusader. A lifelong dream of hers, she wants to protect others like how someone protected her when she was young. During her study of small swords, she met with a man named Hertz Minton of whom despite rocky beginnings, gradually grew closer.

And then the fateful day would come. Crusaders are fated to fight 'Overturned' - horrid, grotesque monsters born of all living things succumbing to their evils - to prevent them spreading and wiping out the world. However, a dreadful event befalls, and Adena is face to face with a "Crestlich" for the first time. An unstudied fortress of a fiend - a significantly stronger Overturned - that proceeds to annihilate them both. With Hertz fatally wounded after a heroic attack and sword mislayed, Adena takes up his old family heirloom weapon. Drenched in Crestlich blood and wielded by the one whom resonated with the statue - the pale sword blackens - Adena henceforth dons the Armour of the Abyss.

Strictly speaking for lore reasons (and not gameplay reasons, as to not complicate things) I will explain how the sealing works. Normally nobody can wear Crestlich Armour without being completely destroyed by it, but it is protected by two seals. The Lich Signet (The crest that can be seen on BM1 and 2 if you look closely), which protects the body. And the sword itself is another seal, that protects the soul. The Lich Signet's stability is based on a few factors - mental fortitude and if it is in proximity with the sealing sword. If it isn't - and not contained within an isolated chamber - like preservestone - it erodes. It can repair itself over time though. 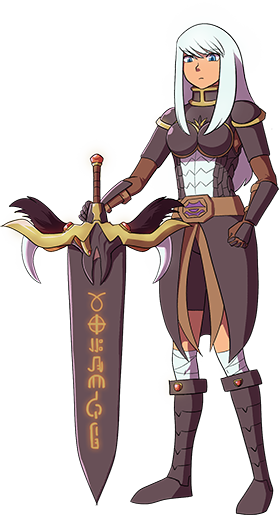 Adena's first battle mode is the default Armour configuration. It appears as just standard armour, always accompanied by the large sealing sword that can be spirited away rather than sheathed. When assuming other 'BMs' the sword will assume the weapon of relevance for that class. The Manipulator is the most balanced, wielding a lofty sword. 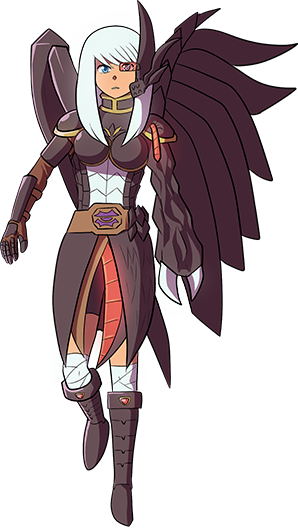 Similar looking to BM2, but with a lot more asymmetry. The sealing sword envelopes the arm into a rather grotesque looking cannon. The entire set of armour on this side is carapaced and reinforced further - due to the horrendous power it wields. Two other additions are a single ‘wing’ - which is just a heavy shield. The other is the ‘anchor’, a heavy talon that can dig into the ground to minimise recoil from any shots fired. 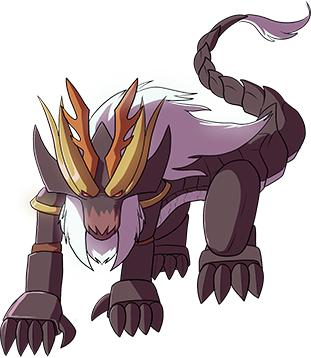 Known as the “Avatar” it is a version of BM1 that has been subjected to the erosion of the Lich Signet. The armour in itself, nearly an identical replica of BM1, though there are reinforced elements such as the helmet and hands. Because their silhouettes are almost identical, they can be confused, though it doesn’t take much analysis of movement to know that you should probably back away. It's considered irreversible, but in theory, a hard enough hit will break the armour off. Some kind of healing is required to restore the Lich Signet. 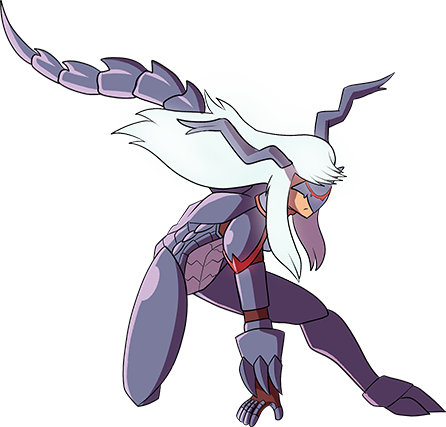 A melee focused power acquired from the Crestlich of the same name, BM3 is designed as a ‘conquered’ version of the Crestlich Avatar. Incredibly fast, but light on armour, it possesses similar qualities and abilities to the Avatar, but without the need to fear for the safety of companions. 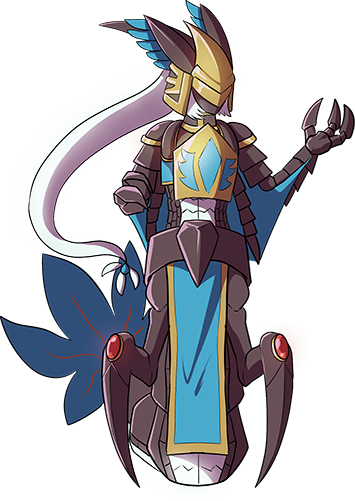 This mode is the most drastic leaning of all the Battle Modes - but also the prettiest. One rule for all the battle modes is they have to be at the very least humanoid, and BM4 pushes the envelope here. Resembling an undersea guardian, the sword is now a trident that possesses powerful elemental magics. While the helmet itself is removable, Adena doesn’t like to do so here. 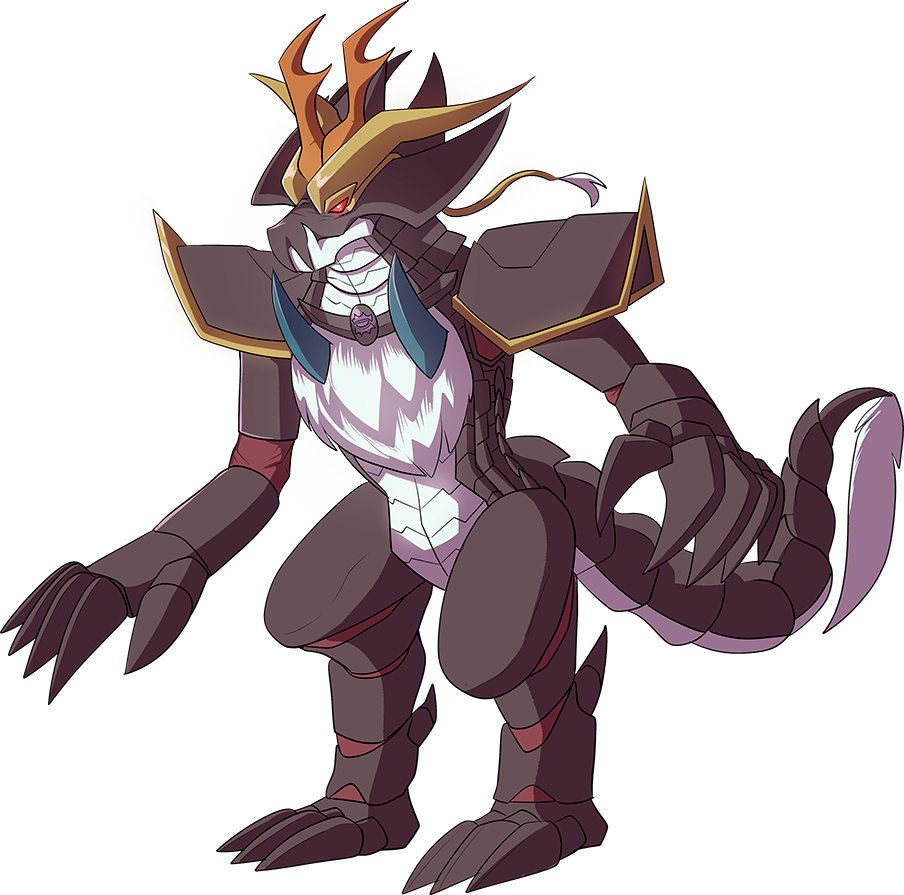 When both seals are damaged or destroyed, the Crestlich Matriarch is the truest form for Adena if she had possessed no protections at the time of the disaster. It cannot even be considered human anymore. I mean, you could probably break through all that armour, but seriously good luck trying. It cannot be used through normal gameplay. 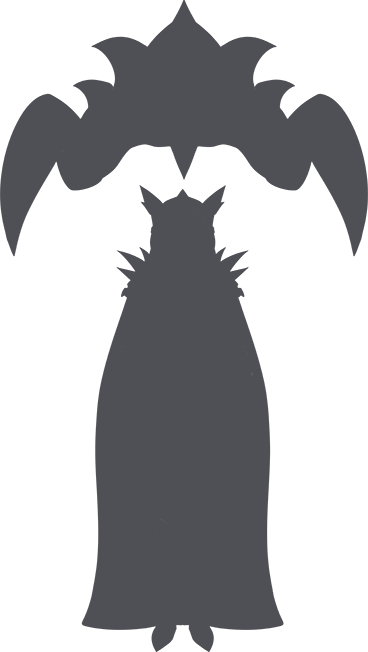 This battle mode is undiscovered.

Darcia looks upon the "Shattered Flower"

A battle against a Nightwinger

author=Zephyrsword
It's been in development for about 3 years, but there should be a demo out within a year. I want to make sure it's at its best before I provide it.

It better be awesome!!! ò.ó

Have a good ride to completion then ^^

P.s.: What you have so far looks really good and intriguing. The Artstyle and Transformation angle is really somethin'.
Pages: 1