I wish I could describe what I just saw

My first feeling when loading this game up is that I might have accidentally been high on acid, what a trip. Bright colors and a cutesy art style collide into something that I’m not sure I can accurately describe. The dialogue feels like actual people speaking, but in a way that sounds like they are being forced to be edgy. 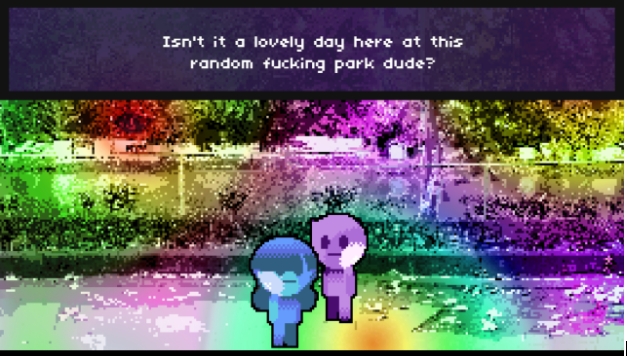 Maaaaaaaan, what was in those Churros?

Not that I am opposed to it, as it is just random enough to really suit what I’ve encountered so far. Also I really like these sprites, they make me think of the little peg people from the Life board game brought to…life…yeah. The music is something right out of a 70s Hippy Dream House and I find it oddly soothing.

Suddenly things take a turn for the stranger, and the masterful change of sound and color really hits. The game is still strange as hell, but it’s really not giving up good elements in order to be strange. 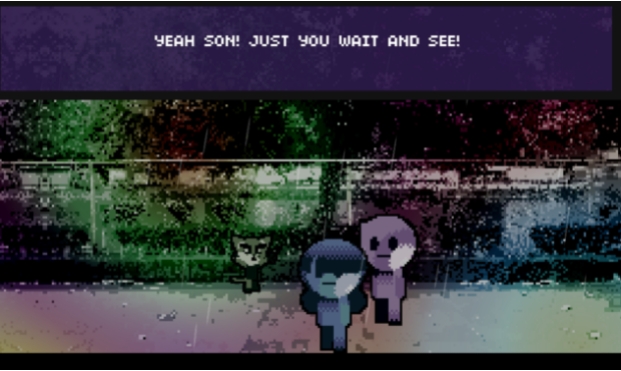 The game finally gives a choice and I’m extremely confused on which option means what, this game really wants to mess with you on ever level. Choosing to press on, so that there can be a game I am shown that this game hasn’t even started getting strange. 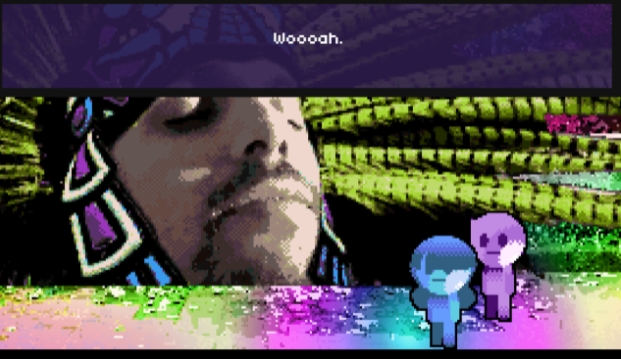 Yeah, the game has gotten so strange, I can’t say I hate it, but I can say I have literally no idea what is going on in even the slightest. Then suddenly it was over, before I had realized it really began. There are 2 other couples to try out in this game, but I’m not sure my brain can handle any more of it right now. Maybe in the near future I’ll give them a go and see what weirdness this game comes up with.

Graphics -
Well…there were graphics, very very strange graphics but overall they fit the feel of the game so I can’t complain about them, and as I said above, I really like the Life peg people. 8/10.

Sound -
The sound fit very well, the music was appropriate and strange and the little sound when characters talk fits who they are, probably my favorite part of this game. 9/10

Gameplay -
Honestly, I can't really say there was any. Couple of choices to be made, but I’m not honestly sure the outcome would have been any different. 1/10

Overall -
Overall, this was a strange experience that I will not soon forget, unless the colors and sounds were secretly hypnotizing me and now I’m a Russian sleeper agent. I did not hate the experience, but there wasn’t really much to enjoy about it either. Worth experiencing at least once, so give it a try, Comrade. 6/10