Jubilee...what a jubilation playing this game!

Jubilee... this game immediately attracted me because the description of the plot was very interesting, since it reminded to me of some old classical Rm2k3 modern horror games... and I wasn't wrong!

Jubilee starts when the quiet life of Micah is suddenly changed by a series of particular events that will shatter his normal life in an apparently normal city, showing him that demons exist and humanity is just cattle to them. This city is also divided into two parallel dimensions, one apparently normal, and a darker one seemingly closer to hell! Our silent protagonist will be soon joined by some friends that will join him in his crusade to free the humanity from the demons... 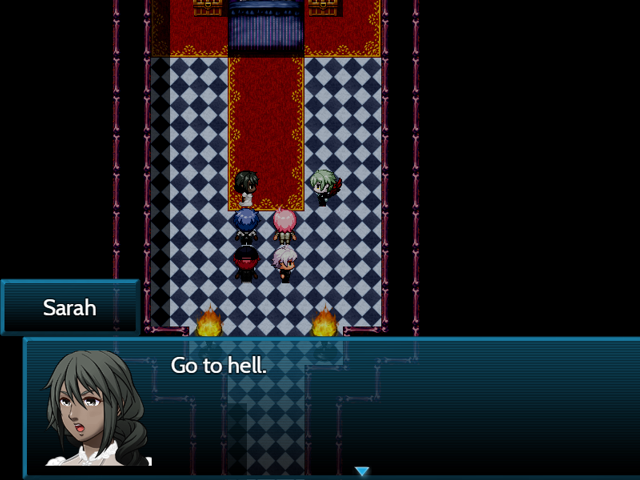 Since this is a game about fighting demons, be ready because this sentence will be said about a million of times! Really! Oh anyway this is an optional quest with a guest party member!

This structure has a lot in common with some old games like Onyx (1&2) and Total and Complete Chaos (those who I call "D.D.D." that means Dungeons, Duels with bosses, Dialogues and repeat, an adventure that can be divided into different single episodes):

1) Setting is modern (not fantasy or sci fi) and apparently normal but demon (megaten inspiration here too?), magic, and parallel worlds or dimensions do exist. Protagonist is a normal and good natured guy but soon displays some kind of power and earn followers. Opponents are equally interesting and there's a cutscene with them after each one is defeated by the heroes. Well, ok I know that's not very different from your typical Final Fantasy clone (with possessed dolls instead of goblins), still it's a variation from the usual fantasy jrpg!

2) Game is divided into dungeons with randomn encounters (oh yes!) against lesser/weak enemies and a big boss in the end. Luckily the game warns to save before facing the opponent since there is always a looong dialogue or cutscene before the fight (note that you can save anywhere only in safe areas, dungeons have save points!).

3) After each dungeon you unlock new areas that may be revisited since they often offer new and better equipments and sometimes they open some optional sidequest.

Ok so basically this is how it works: during the story our party investigates and explores various areas, solving some (not too difficult) puzzles and fighting monsters.

What Jubilee improves from those old games is for example the difficulty selection: there is a normal mode that makes you face challenging encounters, and a sort of story mode with easier combat (but not too easy to be ignored!), and you can freely change the difficulty as you play!

Another cool addition are the Pearls that may be used to buy special items and the postcards that will provide free rewards once sent. Both are scattered around on the maps so exploring is always rewarded.
Exploring the various places lets you find crates and chests whose color describes the content (consumabile, cash or equipment), but pay attention because some are trapped and contain monsters! 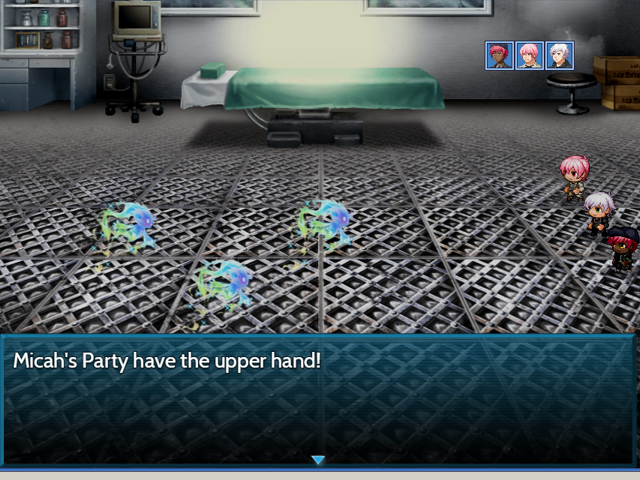 We got lucky! Here we're in the horror hospital fighting these... things... uhm, well let's just call them demons, ok?

Oh yeah, monsters! Encounters are random but sometimes you can escape... if you are lucky! I liked how monsters fits the dungeons, since you will find mad doctors and nurses, in the church possessed priests and little angels, in the factory there will be robots.
To kill those pests our party has a varied arsenal of powers and abilities: Micah is the equivalent of an arcane elemental wizard, Amos is a warrior/healer, Leah is practically a sort of barbarian (lots of different powerful attacks, and she can rage causing tons of damage with each attack) and Miriam is a ... minister, but in the end she looks like an arcane archer! Some abilities requires mana (or JP, Jubilee Power), others need TP (Warner when the character is hit), other abilities may exchange TP for JP, it's a system that at normal difficulty requires tactics, resources and grinding, with the easy setting just tactics and resources (Don't consider to drop them!).

Graphics and mapping are quite good: places are different and some are really creepy (like the cathedral with the blood pools on the dark side, or the cursed hospital), dungeons are mercifully not too long and sometimes they presents some nice puzzles and diversions (like a sliding puzzle or some short parts where you need to locate and use particular items). If maps are well done (and compact, not too big and complex, that's a good thing!) the music selection is also pretty good and appropriate to the various events and moments of the story. 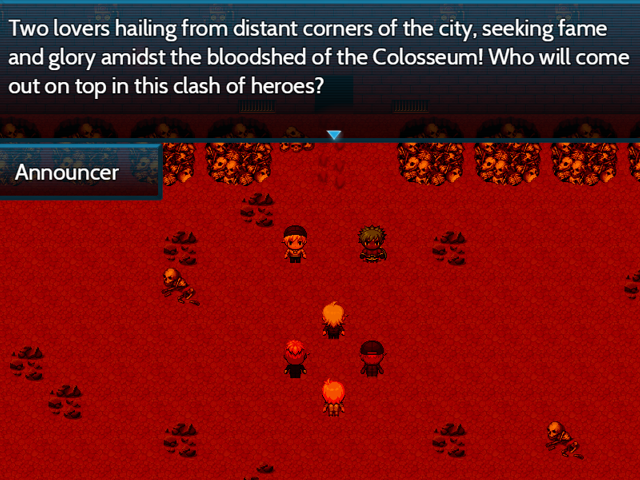 They may be lovers but we're four seasoned demon hunters against two... and we don't mind fighting humans for a change! Uh how creepy is this place!

The bad? Well for example I didn't like the silent protagonist: I know that Micah is supposed to represent the player (since he is often referred in second person "you see", "you find", etc) but this makes him the less interesting and likeable party member since the others have note interesting dialogues and backstories. It's a pity since I like a lot for example the "battle cry" that Micah declares before attacking a mayor demon... it sounds like a sort of "religious sailor moon" but these were moments of awesome!

Then there are some typos here and there, and some errors like an armor (that can be won fighting in the optional battles of the Colosseum) that is called a plate... and then a robe in the next sentence!
I also did not like that in some dungeons you are automatically warped away after defeating the boss... preventing you to loot the final room, so you have to backtrack later (luckily Amos has a "teleport to the exit" spell but still this means re-doing some dungeons, and even if they are not too long it was still annoying since this happened more than once!).
Anyway the errors and problems are really little and few, and nothing game breaking.

Ok, I said what was good, what was bad and now I will tell you what is awesome: the story! Oh yeah I liked a lot this modern adventure with demons and religious overstones (you are warned in the case this may disturb you... in any case it's a well written adventure with its dark moments, but nothing too "edgy") 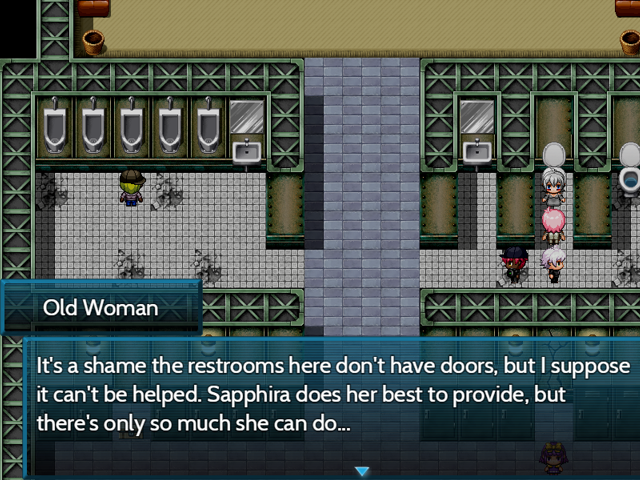 Oh no, not even a curtain? That's REALLY abominable!

The holy judgement
This is a very good game with a gameplay that may not present many novelties but it's a solid system that supports a great story. Yes, because modern fantasy horror games are really a rare occurrance and in this case it's also well written! This game has everything: simple puzzles optional quests and treasures, demons, gay people, great music, challenging combat,and a good lenght! We're talking about 12-15 hours, depending if you aim to be a completionist (find all the pearl and postcards, fight all the Colosseum combat encounters and find every subquest).

This may not be an overly original game, but a pretty good and lenghty one, with a story that will costantly make you wonder what's going to happen next (this was my case! And I liked very much both protagonists and villains!). So if you want a jrpg with a modern setting, an adjustable difficulty and a cool story with religious overtones, look no further, this is your game!
And it's pretty awesome!

Close
01/24/2021 12:46 PM
Ahh I just saw this, thank you for the positive (but honest about flaws) review, I really appreciate it!
TheRpgmakerAddict

author=gayleviticus
Ahh I just saw this, thank you for the positive (but honest about flaws) review, I really appreciate it!

Hey! Thanks for the reply this is a good game to me (and I was impressed that it was not reviewed before), difficulty is well balanced and the story is great, there are only some minor flaws (like the silent protagonist, since I loved the supporting cast), but hey, pretty good!
Pages: 1