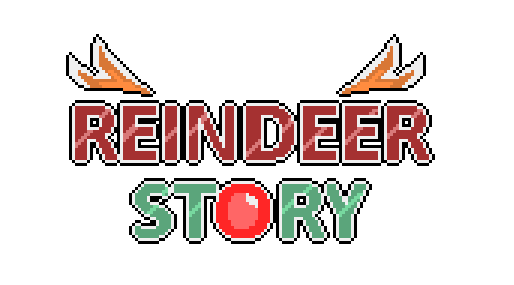 Who else but Lux?

Who’s the Reindeer with the glowing nose?

You see Reindeer takes place in the future long after Rudolph is pushing up daisies. The mere mention of Rudolph in the actual game would result in the full force of copyright to come crashing down on me. So as far as Reindeer Story is concerned Rudolph doesn’t exist. Except for me talking about it right now. :)

So yes! Lux is definitely not Rudolph, you can tell by the clown face and his nose changing colours based on his feelings.

Lux has chronic bad luck, you could even say he unluxy. Only invited to reindeer games as a joke. He made Santa’s Sleigh team once upon a foggy Christmas Eve…saving Christmas with his glowing nose! Lux was awarded a medal and is his proudest achievement.

However his fortunes did not change, the other reindeer resent him for his achievement. This led to him feeling underappreciated and useless, but annoyingly desperate for opportunities to prove himself.

Imagine having an achievement you’re proud of, for it be arbitrary, inconsequential or even detrimental to how you’re perceived.

Will Lux become a hero?
Or will he be doomed to a cruel fate of unpopularity?
Find out in Reindeer Story,