Also featuring some improved grammar, the main update is PG-friendly writing - characters are still kinda rude, but simple words like "crap" and "damn" are now "crud" and "darn" - as well as removing all of the more vulgar content (of which there was admittedly little). I also updated the game by removing Kid Rock!

In the end, this version is for my nephews and to everyone go the spoils. Enjoy!

THE SWORD AND THE FISH

Begun in the year 2000 and completed in 2006, "The Sword and the Fish" would become the second-most downloaded RM2000 game featured on the old Ultima Island website - enough to earn a place among other far more famous RPGs on www.tvtropes.com. It also spawned a fun 40-page comic you can read should you fancy.

AND FANCY YOU SHOULD!

Explosions galore! Maps a-plenty! Enough equipment boxes to kill a small horse! Yes, The Sword and the Fish is the game you've been waiting for - assuming you have been waiting for an archaic-looking game wherein the hero is a scruffy amoral hick. What it lacks for presentation, it later makes up for in presentation! And all the while you can laugh along with the most ridiculous cast of characters to ever operate in an A-B, up, down, left, right universe. The ancient demonlord GWAR (yeah, that's right) has awakened and begun nefarious works, but all our hero CLIFFORD wants to do is rock out in a bad local band. Ambitions are for the weak! Alas, the fates are jerks and Clifford soon finds himself forced to save the world, like, three times. At least. Maybe even more!

Join Clifford as he foils his village's local cult, gets headbutted by love, meets robots from the future, engages in tomfoolery, realizes the robots aren't really from the future, goes on trial for thuglettry, and tracks down and kills 7 powerful demons - before taking on Gwar himself! 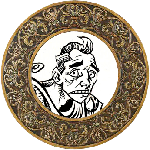 There's no game to download yet because the site says my .zip is too big (559,462 kb). How do I actually upload the game to this new 'game profile'? What file does it need?

Close
07/30/2020 10:30 PM
You'll need to host it elsewhere through another service and then give it the link to the zip file, until you get enough makerscore to host it locally.
Scumdrop

Close
08/07/2020 12:20 AM
Thank you. It should be up and available now - and I hope the download works! It would not take much coding to advise newcomers on when to use 'upload' or 'URL' when creating new games.
SkyBirdGirl

Close
08/07/2020 01:30 AM
I remember seeing and playing this game from back in the day, but played it from another Rpg community site that does that exist anymore.

It's a great game, worth playing.

And yeah, I agree they should have a URL text option for the download button here.
Marrend

author=Scumdrop
It would not take much coding to advise newcomers on when to use 'upload' or 'URL' when creating new games.

I dunno about coding a reminder when uploading/modifying downloads. However, for what it's worth, the submission rules specify that games over 450MB cannot be "accepted". Though, the term "accepted" in this case means that RMN's server won't accept files of that size, rather than having anything to do with the queue.

author=SkyBirdGirl
And yeah, I agree they should have a URL text option for the download button here.

...We do? The option to make a download in general is only visible/available after a gamepage is accepted. Still, after that point, the option to use an external URL, rather than use RMN's server, is totally there.
Pages: 1