1 reviews
What is Demur?
The word Demur, meaning doubt, plays a pivotal role throughout the game. Maria, one of three survivors living in a world completely void of humans save for them, suddenly hears the cries of a child. Rushing away from safety, and ahead of both Aaron and Karin, Maria eventually not only hears, but sees the child as well. He is a small boy, frightened by the world outside. Pulled along by Maria's desire to rescue the boy, the three survivors explore the street they live on in order to find him, and bring him to safety. This game was made for the One Map Challenge, and clocks at between 45 minutes to an hour to complete.

The Characters (In order of spoken lines)

Aaron Mars:
The safehouse they are staying in was once Aaron's very own cafe, that he bought with his own money. His time serving others was cut short once an unknown apocalypse suddenly replaced most of humanity with something inhuman. He laments his lack of strength and willpower when it comes helping others. He sees a chance to remedy that when finding and giving Maria a place to stay with him and his best friend Karin. A very thoughtful young man, but one that doesn't want himself known to others.

Karin Todd:
Karin's only priorities are the safety of herself and her best friend Aaron, with Maria's well being coming in a very far second. She's more than willing to leave the fates of others to chance, if it means the two of them remain safely together. Taking in someone new wasn't her idea, but in time she may warm up to them. She has both a knack for mimicry, and picking locks, which has saved her skin a number of times since the apocalypse started.

Maria Felt:
Even though she had only known both Aaron and Karin for a few days prior to the story, she already considers them fast friends, regardless of her friend's regards towards her. Her sensitive hearing and desire to find others has caused the group to leave safety for what she thought she heard, which usually did not end up being human or friendly. However, this could be her once chance to rectify that, as she both heard and saw a small boy nearby. She would never be able to live with herself if someone on the outside were to become hurt, because of any refusal to act on her part.

Features
- Battle system where each character has an instant use, one use skill per battle, and all other skills are equipped and usable without a HP, MP, or TP cost.
- Karin can copy and give the party the use of enemy skills via their Essence.
- Bestiary that gives insight on what skill they give you + their stats, drops, and weaknesses.
- Over 30 enemies.
- Custom Main and Battle Menus/Layouts.
- No default RPG Maker graphics, music, or sound effects.
- Rain...lots of rain. 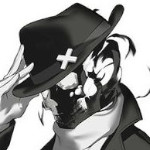 Close
08/18/2020 01:58 PM
Awesome, thanks for accepting the submission!
Download is now up.
TheRpgmakerAddict

The enemies Sonny, Thresh, and Reptillian drop Baromes (party heal) at a 50% rate. Boss also might not even bother using the attack all skills as much, and isn't resistant to the bleed status effect. Boss is resistant to it, but it's also possible to cause Fear to it, which stops all attacks from happening any turn fear's active. High Power characters with Lacerate also deal a lot of damage to the poor abomination, which can be copied from the Reptillian enemy.

Close
08/20/2020 05:33 AM
Ahah nice to know thanks! I assumed it was immune to fear so I never tried that. I will try again since I have a save just before that encounter...
It's a short but nice game, I like the concept of improving the characters in a different way from the usual.
Pages: 1