Mozart is a werewolf


Wolf's Gang is a game made using RPG Maker MZ. It's actually one of the first games made with the engine. I downloaded the game from Steam and played it using that platform.

It's immediately apparent that the developer of this game is a veteran of RPG Maker. The programming in just the first couple scenes is excellently done. It also includes a lot of features not found in default asset projects. I'm not too familiar with the graphical assets of RPG Maker MZ, but what is presented in the maps and layout of the game is decently done. 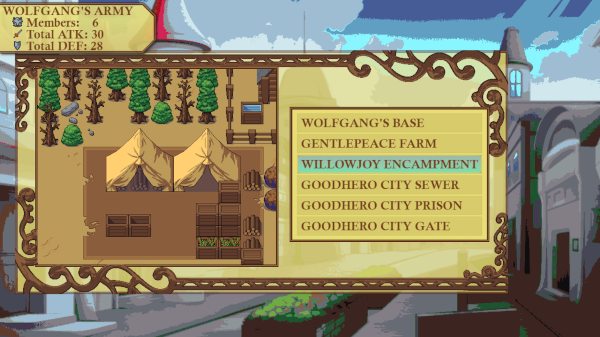 After completing the first mission you'll get a lot of choices of places to go.


So what is this game all about?

Well it's obviously about the most famous classical music composer, Wolfgang Mozart... Okay, I made that part up. The main character's name is Wolfgang though. Wolfgang is about to celebrate his birthday when a band of heroes crash his party and kill all his friends. Wolfgang finds out that the tower where he used to live is in ruins and that the dark lord has been defeated. Wolfgang then embarks on a journey to compose the most lovely piece of classical music ever, The Magic Flute... I mean, he vows revenge and starts building an army to rebuild the tower. 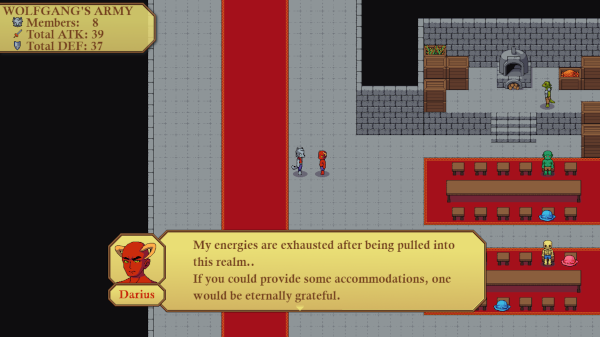 Don't you hate it when you accidently summon a powerful demon?


And this is where the developer shows some real technical skills. When you exit the tower level you can choose a level to explore. In that level you can find badies to add your your army. Now some of those badies will be part of your regular army and some can be recruited as party members. In order to recruit party member you'll need to expand your tower by adding rooms, which requires resources. Another thing you can do in the tower is combine 3 food ingredients to increase your army stats. There's a lot of interesting systems here, and it's nothing to scoff at if your a beginning developer.

A lot of the rest of the game will be about "exploring" small areas to find friends or resources. Enemies appear on screen and if you bump into someone you'll enter a front view turn based battle. You have to wait until you ATB bar fills up to do an action, but if you're too slow the enemy can attack you while its your turn. Though if your selection a skill you'll be safe from attack. The onscreen enemies... Dammit... How are they able to track you down so efficiently? You can be standing half a screen away and see a townsfolk start walking towards you. Another issue is that even after defeating them they'll respawn in under a minute. This is probably my main grievance with this game. If you're going to the trouble to make on screen enemies, then give me the choice to avoid them. And if I do defeat them I feel I should be rewarded with the ability to explore the area unhindered. That's just my person opinion on the use of this mechanic.

Taking into account that the programming is excellent, the mapping is decent, the story is average, and the battle implementation is slightly annoying... I give this game a 3.5 / 5.