The intro that could have been.

After the event ended, one of the things I wanted to do was add in a lot more polish, and in particular fix up the intro.

This was my first pass at making an intro; though for a lot of reasons I'm going to completely redo it, and it won't be making it into the final release. A lot of effort went into it, though, and I thought it might be kind of interesting to look at.

Looking back on my writing.

To begin with, this game isn’t dead. Development is still on-going, but things are proceeding slower than I’d intended. Part of it is due to things outside of my control (I live in the Pacific Northwest, have asthma, and work six days a week – so I’m a lot more exhausted than I normally would be), other things are are pretty much entirely my fault (Focusing too much on polish, rather getting things done).

I don’t really have any excuses, though I will say that moving forward I’m going to try to spend my time more wisely.

Anyway, AtiyaTheSeeker (also known as RachelTheSeeker on the Discord) recently wrote a blog post titled ‘A Melodramatic Postmortem’ for A Child Called Ash. It was an interesting read and while I’m not too sure if it’s faux pas or not, I thought I’d do something similar for Bounty Angel 2.

The demo version of the game (AKA the only version of the game that exists right now) was my entry for the 50 Days Of Representation Event. It was intended as a celebration for the fiftieth anniversary of the LGBT pride marches – though games representing other types of minorities were allowed.

I plan on going more into detail on this in another blog post, but one of the things that bothered me about The Last Jedi is that for a supposedly female led movie, all of the women just seemed to exist for the sake of the male characters’ arcs. That’s something I wanted to avoid so I decided early on that there wouldn’t have been any guys on the Valkyrie, and Ericka was just going to be an allosexual lesbian who could romance crew members. I mean, I tried not to dip into “Girls Rule, Boys Drool” territory like modern Star Trek sometimes does, but I thought keeping the story focused on women would be more appropriate for an event based around representation.

To make a long story short, Ericka only became an asexual because I’d been thinking a lot about a character from The Outer Worlds: Parvati Holcomb. She’s a fan favourite, and her inclusion helped Obsidian win a GLAAD Award for Outstanding Video Game.

She was also by far my least favourite character, and I found her really irritating.

This is dangerous territory, so before I go any further, I just want to make it clear that this blog post is not me bragging how much better my OCs are than the ones from a popular game. I’m not a professional writer by any means, this is just me talking about my writing process. As of right now, I’ve got 30 downloads, and I’d honestly be surprised if half of the people who downloaded my game actually got around to playing it. Outer Worlds has sold more than two million copies worldwide.

This is also just going to be my ‘opinion’ and if you happen to like Parvati, it shouldn’t be taken as a personal attack or insult.

Anyway my issue with Parvati was that the person writing her was themselves asexual, and put a lot their own experiences into the character’s dialogue. While I do admit this gave the character more depth I felt that it clashed with setting. One piece of dialogue that stood out is where Parvati says that the people in her hometown called her a robot because she never showed any interest in sex.

This is game where the first NPC you can interact with is a cop who’s slowly bleeding to death. The very first thing he says to you is a cheesy corporate slogan. Once you get him talking, he reveals that his gun misfired and he shot himself while he was trying to write a parking ticket for a spaceship that didn’t land on the designated landing pad. The honest impression I got was that he was more upset about the ship violating corporate parking laws than he was by the fact that there is now a bullet inside his body and that he nearly died.

Then you move onto town and find out that the local boss makes everyone work sixteen hour days with no days off (nobody seems to mind this), and everyone is suffering from extreme malnutrition because the only food they’ve been eating is fish (nobody understands that this is a Bad Thing). There’s a sidequest where you convince a lady who ran away from home to become a space pirate that she should go back because being a space pirate would prevent her from watching soap operas (they may actually be radio dramas – I’m not completely sure).

Again, just to add in another disclaimer, I know there’s no shortage of people who don’t think there’s any disconnect, or even if they do, would argue that it’s not an issue, but I personally found it annoying, and it was one of the reasons I didn’t want to write an asexual character.

But then I thought about it, and I guess it didn’t sit right with me that I was going to self censor just because I was worried I’d turn Ericka into another author avatar. The event was about representation, so, that’s what I tried to do.

Maybe I succeeded, maybe I didn’t, but an effort was made, and I think I’m glad I tried.

Now that it’s been a couple of weeks since the Bounty Angel 2 has been released, I thought I’d do a write up on what my current plans for this project are.

To begin with, the most interesting thing I’ve been doing so far is making some new spaceship models. This is the Hammerhead Freighter: 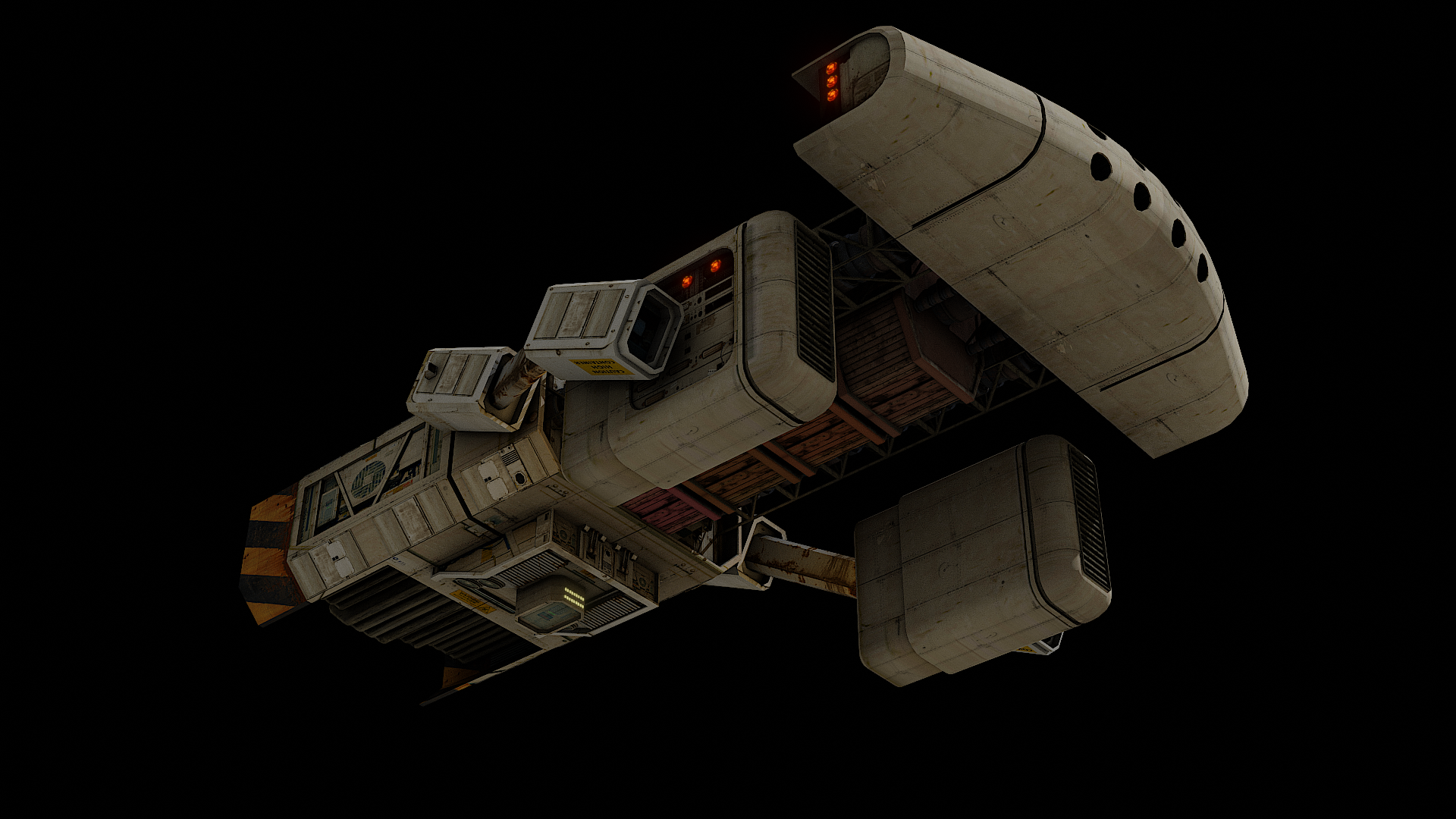 It’s basically four beam cannons and a cargo module, strapped onto a giant nuclear reactor. They’re an old design, modified from robotic ships that were ubiquitous before the technological collapse.

Freighters were mentioned in the original demo, though never actually made it into the game. Originally I wanted you to fight them during the Battle of New Eden, but I didn’t have enough time to make one from scratch and I didn’t have a model lying around that could be passed off as one.

Instead I just dug up an old ship I’d planned on using for Psi Dogs and stuck it into Bounty Angel 2. It wound up saving a lot of time, but, it’s going to get swapped back to what I originally intended next release. You also probably won’t encounter it on Sigil, so the Pirate Cruiser might wind up being retconned out of the universe entirely.

The second ship I’ve been working on is a redo of the Aegis Class Frigate: 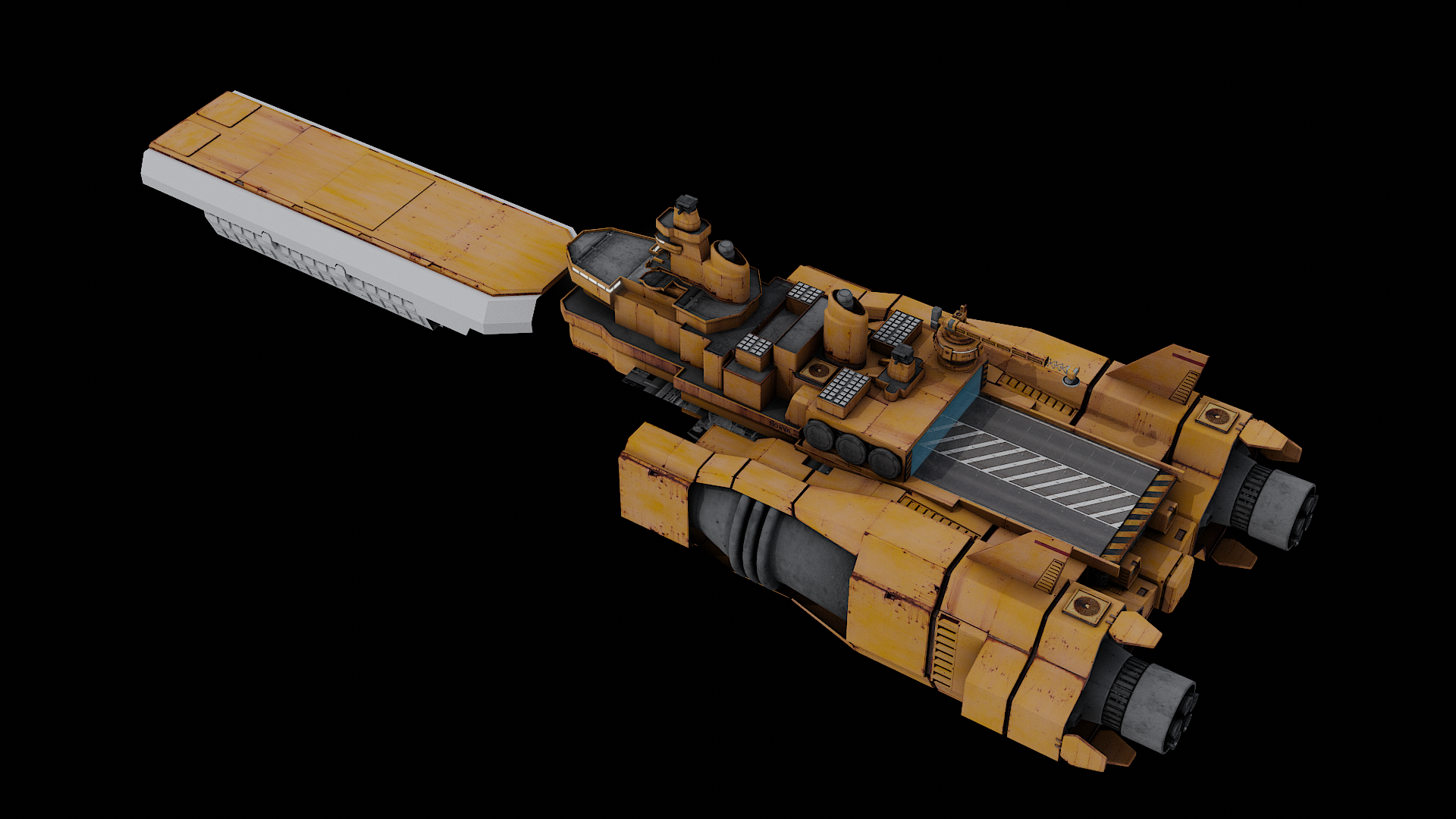 The original white design I was using was inspired by mecha anime like Gundam and Martian Successor Nadesico and while I’m fairly happy with what I came up with (despite it being pretty low detail), it just didn’t fit the visual language of Bounty Angel.

Obviously this is still very firmly a work in progress and a lot of details are subject to change. I’m still getting the basic hull shape down, and aside from the crane in the back, I haven’t really started on adding the finer details. Hopefully the end result will look like something out of Alien or Star Wars.

Speaking of end results, I’m pretty happy with the reception this game got during Liberty’s stream. There were some bugs I’d managed to overlook, but nothing overly game breaking. People seemed to be surprised that I got this working in RPGmaker 2003, and, that’s always nice to hear.

That being said, I do plan on replacing the computer puzzle in the morgue. It was originally just there because I needed something to break up story beats, and I thought it would be kind of a fun, meta puzzle.

That turned out not to be the case.

I won’t get into details, but the new puzzle I have in mind is maybe a little more meta, and hopefully a lot more straight-forward. If I pull it off properly, it’ll also be able to flesh out some of the setting a bit more without info-dumping, and that’s always a good thing.

Pre-production on Act 3 has started, though in all likelihood, the next release will probably end at the same point the original 50 Days of Representation demo did. This is because a Review Event is beginning soon, and I’d like to be able to release a more polished demo before it starts. Things are taking longer than I expected though, so that might not actually happen. As it turns out, 3D art can sometimes involve a lot of repetitive motions, and my wrists aren’t very happy with me right now. I’m not sure if it’s Carpal Tunnel Syndrome, Tendinitis, or some horrible nightmare condition that has previously eluded science, but there is a limit on how much work I can do in a day.

That’ll be it for this update. If you’ve got any questions or comments about the game, feel free to ask.

Likewise, if anyone wants to play around with any of the models I’ve made just let me know, and I can upload them to my google drive under a Creative Commons Attribution-NonCommercial 4.0 International license.

To begin with, I'd like to give a shout out to Sanrie for all the custom art they've done for this game.

They're extremely skilled, and without them the world of Bounty Angel 2 wouldn't be nearly as unique as it is. You can check out their Art Commission thread here:

If you're subscribed to this gamepage, you might have noticed that I changed the status from Hiatus to Production. Originally I planned on taking a break from Bounty Angel 2's development after the demo is released, though for a number of reasons, I've reconsidered and I'll be trying to finish this game all in one go.

There's a roughly 0% chance that the full game will be ready by the 29th, though.
Pages: 1