0 reviews
Save to Dropbox
Every breath, every second, every single moment of life.
You and I, we're not that different, so goes for those who are blind.

You play as Mrs.Clarke, a spell-caster who was born blind. Never been able to see the colour of the sky, never to know what 'colour' that you speak of. Only to touch, feel, and hear what the world could provide her. Now, you are in her shoes.

This game focus you to explore, understand, and experience the life of a blind person in an RPG world.
Specially made for 50 days of representation event.

Story written by Hideo Kojima Zorga.
Fantastic art and coding by Mirak.
Me being a mascot.

Visionless 1.3 - Welcome and thank you everyone!

Hello everyone and welcome to the most exciting part of post-game dev, blogging!
(No? Just me? Alright I guess, at least I still enjoy writing it.)

First off, thanks for visiting our game page!
We hope you enjoy my terribad CSS for now until I bug Mirak with his blessings.

Our newest version(1.3) fixes some minor issues. Such as leftover sounds playing.

Of course, I would also like to take this opportunity to thank Mirak and Zorga for their slavery effort and hardwork on making this game the best that it can be.

Subscribe so you can keep an eye out for our complete game as we continue to develop chapter 3!

P.S For best effort, I'd like to recommend you to blindfold your eyes a day to fully experience the life of the blind for a day. 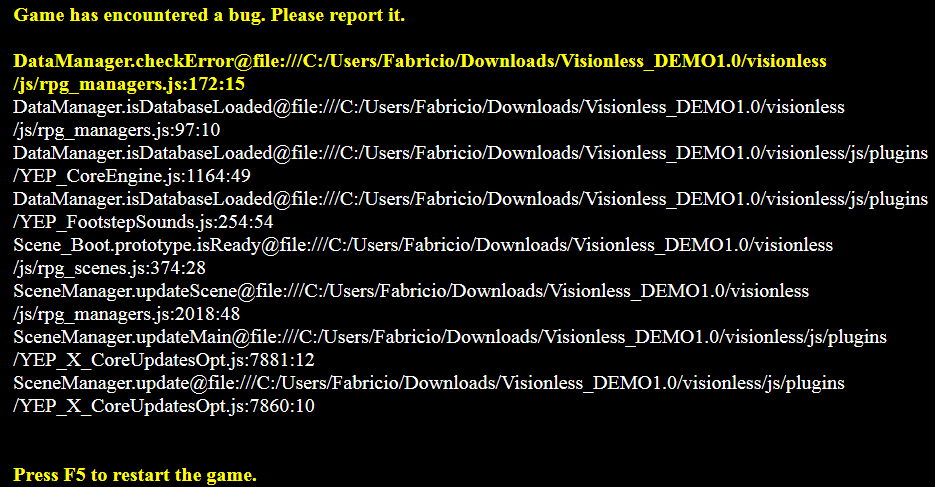 Stand back. Artist at work. I paint with enthusiasm if not with talent.
8394

Sorry for inconveniences! We'll look into adding an executable version of the game soon.

Stand back. Artist at work. I paint with enthusiasm if not with talent.
8394

author=Gretgor
I do not own RPG Maker MV. I guess I'm gonna have to skip this one. I'm so sorry, I hope you understand.

Hi and thanks for willing to give our game a try!
Sorry about the previous version where it was not an exe
Cause we kinda panicked as the end time gets closer

The newest version(1.2) should have been uploaded. It's an exe file so you won't need to have MV engine anymore. Cheers!
Gretgor

The concept of this game intrigued me from the start. A game that tries to translate the experience of being blind to a mostly sighted public? That has the potential to be quite fascinating.

I myself have spent, in the past, quite a long time thinking about how to best design games for the blind, but as it turns out, I never got around to implementing those ideas. While there do exist some blind-friendly videogames out there, they're a mostly unexplored territory of game design that I have some interest on. Not gonna lie, most games I've played or made are very much visual experiences, so designing compelling gameplay without visuals at all sounds like a fascinating challenge.

Now, this game itself employs visual information, but I believe many of the ideas it uses could be easily translated into a blind-friendly experience, making it a quite interesting thing to check out.

- Interesting and original ideas all around.

- Fascinating presentation, with all objects being represented by their sillouette, which is what a person could conceivably make out with their sense of touch.

- It shows that an experience about blindness does not have to be dark and scary, instead being a light hearted and fun story. This is an enjoyable short account of the everyday life of a kind and wise blind witch.

- Narration only describes things related to touch and sound, which is a fascinating way to write.

- Fascinating usage of sound offset to convey sceneries and events.

- I like how tactile information is translated into visual information, it's pretty neat.

- Interesting puzzles revolving around navigating a map while not being able to see.

- Beautiful soundtrack to go with it all.

- The fact that there isn't more of it.

This demo is a really fascinating little thing. The way it handles storytelling, presentation and gameplay are unlike anything I'd ever seen before.

So for originality, pleasant presentation, compelling story, and fascinating gameplay, I'll be dropping my second 5/5 of this jam. I was so engaged it made me kind of sad when it was over.

AND TO THINK I ALMOST MISSED OUT ON IT FOR NOT HAVING MV! That would have been criminal!

You're right actually, at first we were gonna make a full sound thing, with text to speech and all that. Then it started to be really difficult and barely any fun, so we compromised.
I wrote and composed, and your story and soundtrack feedback is making me really happy, personally - but beyond that, I'm gald you liked the package.

We're working on the full version right about now, and and a steady pace too~ Ch3 is written and all.
Gretgor