Toothy and the Fantastic Sandwich

Toothy and the Fantastic Sandwich by IvanezRus
Length: ~45 minutes 
Hey you! Have you ever been hungry? Well, then you will probably relate to Toothy and the Fantastic Sandwich a lot.

Ashamed as I am to admit it, I still haven't played Space Funeral. I know that it's right up my alley, but I've just never had the motivation to give it the short time it's asking for. Which makes it all the more ironic that I played this heavily Space Funeral inspired game the day it released on RMN. Of course, for the sake of this review being better, I probably should have played Space Funeral before or after Toothy to see how the two compare, but I am as lazy as ever, so instead we'll just look at this as a standalone game.

The best way I can sum up my opinion on Toothy would be to say that it's unpolished, but charming. It's clear that the game was not made by someone who's incredibly familiar with rpg maker, but still has a good enough grasp to make a playable little experience that is rough around the edges, but still has a lot of fun to offer. Just like Space Funeral and its inspired games, from what I can only imagine, this game's writing is very nonsensical and silly. There is no coherent plot, but instead a strange set-up, various shnenigans in between, and an end. The game's scenerios are varied and silly enough to keep you entertained from start to end, and the silly dialogue was always enough incentive to try and explore everything for me. In the end, I'm fairly sure I've seen everything (including the secret room), though I'm not 100% sure because I think I found all the sheep (ten or eleven I think) and crabs (four) but never actually got anything in exchange for them. The description does mention the game might be expanded on in the future, though, so maybe they just don't have a function for the time being. Yes, the pun is intended.


Most of Toothy's gameplay is made up of exploration and small puzzles. I did get stuck once in the game, but that was mostly because I was missing something incredibly obvious, and not the game itself being difficult. It's a very casual experience, one that is both short and easy, which was honestly perfect for my mood. The various little puzzles you come across, no matter how easy, are all fun, and don't really overstay their welcome. Gameplay wise the only area I wasn't a huge fan of was the dark cave, but even that didn't bother me enough that I would say it was a bad area. The exploration has a lot to offer as well, with a ton of collectibles, that granted don't really do much, but were nice to keep an eye out for.

Another major part of Toothy to bring up is that it was made for the "I Can't Draw But Want To Make A Game (Again)" jam, which should be pretty self explanatory from the name. It's true that the game's pixel art is very roughly made, but that's part of the charm, and one of the biggest benefits of games made in rpg maker 2003 - you really can't go wrong with the graphics. At least not to the same degree as you can with the more recent rpg makers. I actually think Toothy is a really nice looking game, and so are most other games with Space Funeral style graphics I've seen. Toothy having a much lighter palette than the usual Space Funeral game does is a nice touch, and the colors themselves are well picked and pleasant to the eye. Unfortunately, the game's presentation does lose some points due to the complete lack of audio. I guess it's nice that I was able to listen to my own music while playing, but at the very least some sound effects would have been nice. The developer does acknowledge this on the game's description, and I hope they take the time to add some sound to in the future.

It's not really the biggest issue I had with Toothy, though, that would be what I mentioned near the start - that it's pretty unpolished. It does add to the charm a little bit, but I can't exactly say it's not jarring sometimes. The most noticable for me was how your previous sprite is visible for a second when entering the world map before it switches to the world map sprite, and vice versa. This and a few more minor unpolished interactions don't really ruin Toothy, but are noticable enough that they'd be better off being patched.

But in conclusion, I don't really have a ton to comment on here. It's just a solid little game all around that made for a good, casual experience. It seems memorable enough that I can see myself replaying it in the future, so if it does get updates like the developer intended, I'd certainly be interested. I give Toothy and the Fantastic Sandwich three and a half sandwiches out of five. First of all, yeah, it was inspired a lot by Space Funeral, so please play it, I feel you won't regret it.
About the game being unpolished, yeah, that's the absolute truth. I was not only aiming for a somewhat crude style, but also was very short on time due to not having good ideas and also not managing my time very well. Some things out there are not too easy to figure out because of it, like a reward for gathering sheep/crabs, but, on another hand, I managed to squeeze a lot of juice out of a day and a night anyway, so, in a way, it was a good exercise too.
I'll be able to get back to this game this autumn and add something nice for it. Maybe I should find some musician or look up for some free soundtracks because I am not too good at making it myself.
Game's artstyle is inspired by Space Funeral, too, but in general I based it on my childhood drawings and Bitsy games. In a way, Toothy is pretty much a glorified Bitsy game, except maybe for puzzle bits, because I can't quite figure out if it's possible to pull them in Bitsy, but that's not a problem, cause they work fine in RPG Maker.

Thank you for your kind words, my man! And thanks for sandwiches, they were delicious! Stay cool and have a good one.

And also, here are some of those childhood drawings: 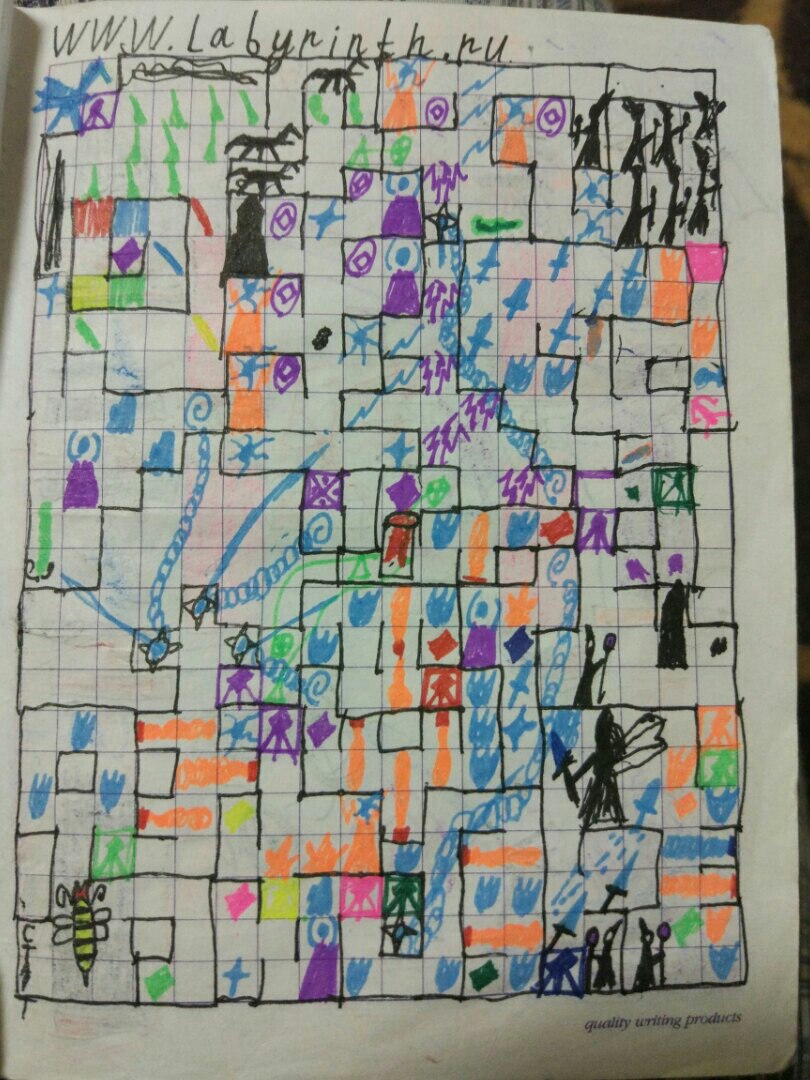 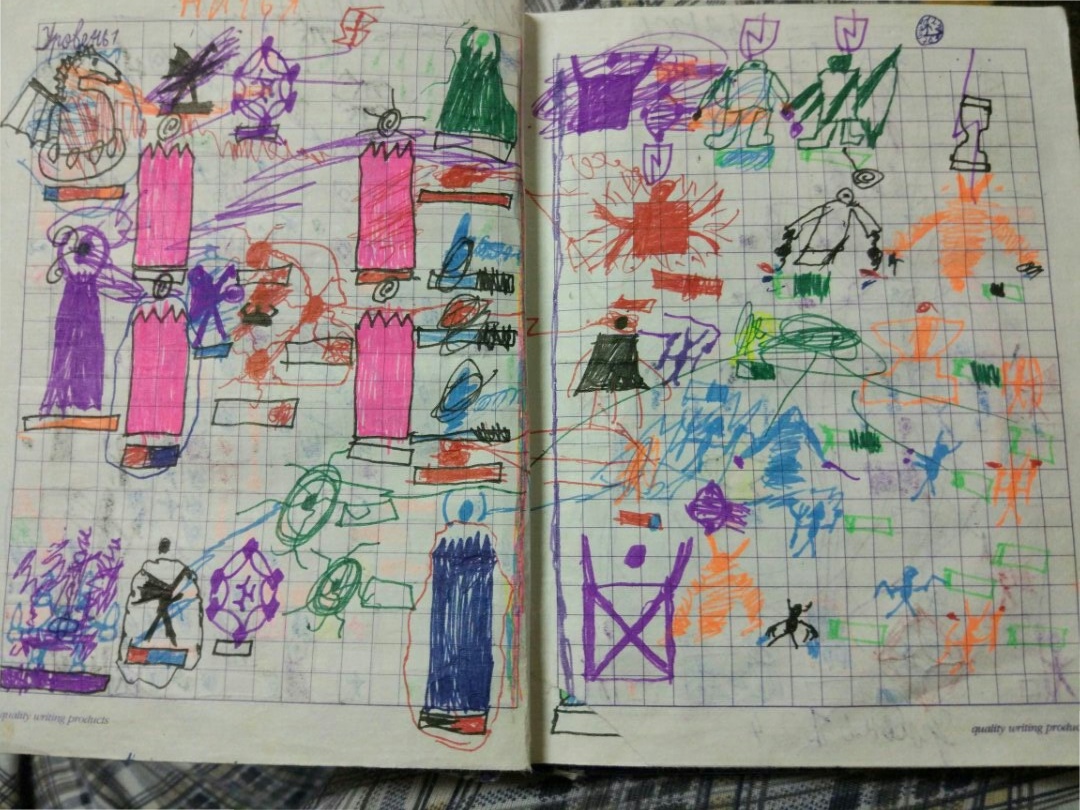 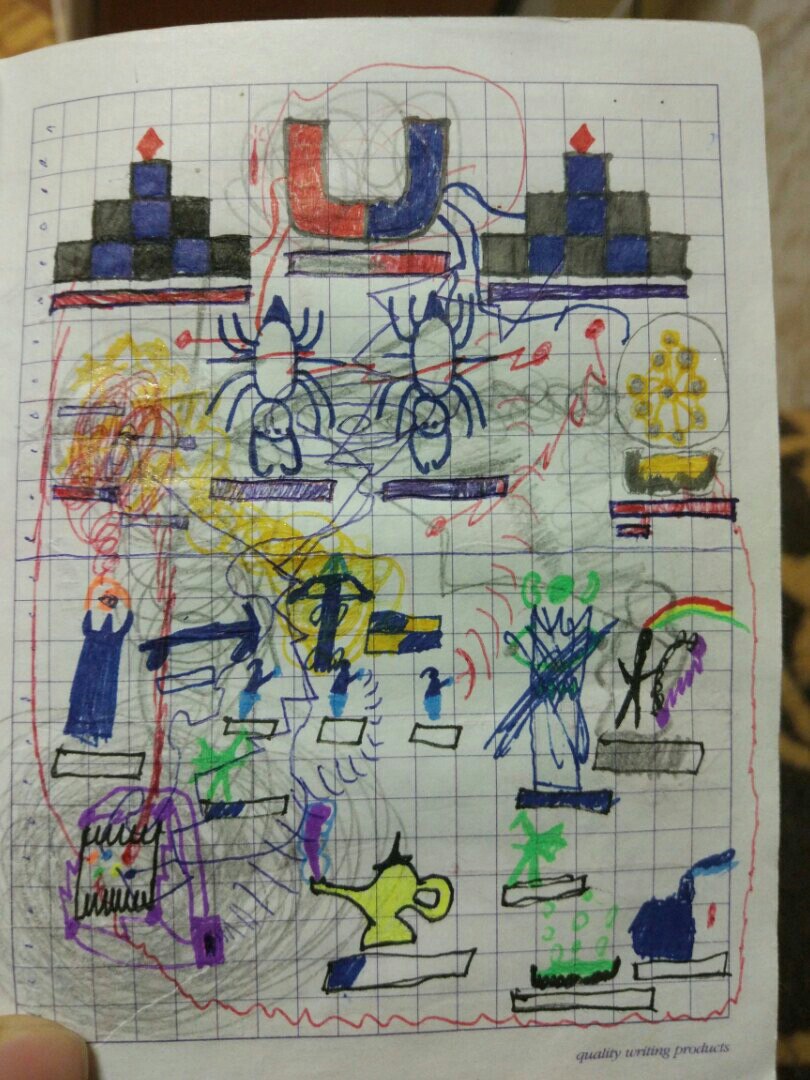 Close
08/30/2020 09:32 PM
It's actually really cool that the game was inspired by childhood drawings! And bitsy games too, kind of ashamed that I did not think of that at all. If the game does get expanded to have more content, I'd love to give it another go as I said. For music there's no shame in using free stuff, people generally won't complain and it's better than radio silence. In the end though I just look forward to whatever you do next :D
IvanezRus
442

author=Frogge
If the game does get expanded to have more content, I'd love to give it another go as I said.


Yeah, probably adding some more stuff as well as some hints on previous one could be a good thing. I intended to have more battles, like in a typical JRPG. In fact, you can look in Monster folder and you will find that the final boss wasn't the only enemy intended.

author=Frogge
For music there's no shame in using free stuff, people generally won't complain and it's better than radio silence.


Yeah, I wanted to come up with something on my own for my first game, but if it doesn't go well, then I should look for something fitting out there.

author=Frogge
In the end though I just look forward to whatever you do next :D

author=Frogge
If the game does get expanded to have more content, I'd love to give it another go as I said.

Yeah, probably adding some more stuff as well as some hints on previous one could be a good thing. I intended to have more battles, like in a typical JRPG. In fact, you can look in Monster folder and you will find that the final boss wasn't the only enemy intended.

Oh yeah, I actually checked the folder before playing to see if there would be any battles. Almost mentioned that in the review, but I didn't really find a good place to fit it in.

author=Frogge
In the end though I just look forward to whatever you do next :D

Yeah man, this is a lot of fun, it definitely has me interested to see whatever you might cook up in the future!
Pages: 1