Pretty soon after those previous blog posts I made, in which I mentioned wanting to start doing weekly progress updates and stuff... I realized that there's not really a whole lot I can show that I haven't already? So, yeah, no weekly updates, just whenever I feel like it.
I don't mean to say that the game has no content or that work isn't getting done, it's just, as an RPG, the gameplay stays the same throughout. Everyone here already knows how RPG Maker games play, soooo... the most I can really show is some visuals.
Anyway, before I start rambling again, let's get to the meat and potatoes of this post.

Currently, out of the 12 "dungeons" in the main story (loosely referring to any distinct area that contains stuff you fight) all but the final one is mapped, populated with enemies and items, and playtested. The final dungeon is more than halfway done, with a few more maps, bosses, enemies, and dramatic scripted scenes to go.
However, as I'm a very strictly "gameplay first" sort of developer, tilesets, sprites, animations, polish, and other such things are only finished for about half of those dungeons.
After that, there's a bunch of optional areas to flesh out the world. I always find it disappointing how in most RPGs, when you get the airship and can explore the whole world, it ends up being mostly just full of places you've already been, places required for story progression, or tiny places with nothing much to do. So, with that in mind, there'll be a few full optional dungeons, secret bosses, and entire story events scattered about just for the exploration-minded players.

Next, I'll take a moment to briefly introduce the characters here so as not to clutter up the main game page (maybe I'll consider adding another game page for this, if I feel like it). 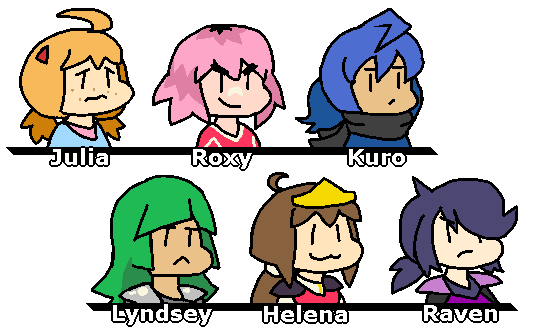 Roxy
The closest thing the game has to a protagonist. She's a rough and tough but cheerful tomboy who's always eager to solve problems with her bat, but isn't good at taking serious situations seriously.
Possesses a balance of healing magic and physical attacks, leaning more towards the latter. Her ability to buff the attack and magic power of her teammates is quite valuable.

Julia
Roxy's childhood friend, though not by choice. Would rather stay home than go out on adventures, but has more or less accepted her destiny of being dragged around by Roxy at this point. Somewhat antisocial and doesn't take kindly to strangers.
With their similar skillset, she and Roxy might be mostly interchangeable in your 4-person party setup, but the two of them together can be a surprisingly potent combo.

Kuro
A ninja fresh out of training who is serious almost to a fault, stubbornly insists on using big words and refuses to use contractions. However, she has a fondness for literature and studying monsters, and will talk for hours if you get her started.
With her speed stat, she will pretty much always go first in every situation. Starts weak, but her ability to deal damage grows significantly with her high critical hit chance.

Lyndsey
A level-headed, kind, and supportive knight. If anyone is hurting, physically or emotionally, she will always do her best to help. Used to be dating Kuro, but they broke up. Will teaming up again allow them to repair their relationship, or will they just end up fighting again?
Has high HP and physical defense, her skills are well-suited to minimizing the damage everyone takes. With a little bit of support, she can become very difficult to take down.

Helena
An endlessly optimistic Magical Girl who some might say is past her prime, but she herself would heartily disagree. She's apparently saved the world several times before, and has become a bit of a celebrity. She and her girlfriend Raven are completely inseparable.
The best in the team at using elemental magic attacks. Under the right conditions and while exploiting elemental weaknesses, she can do some big damage with plenty of MP to spare.

Raven
The daughter of the titular Dark Evil Queen, she was swayed by Helena's charms at the end of one of her past adventures. Hopelessly attached to Helena and doesn't think very highly of any other lowly mortals, but maybe someday she'll change her tune.
With a little bit of setup, she can deal devastating damage to single targets. However, she's not much use against undead or anything else that can resist her curses.