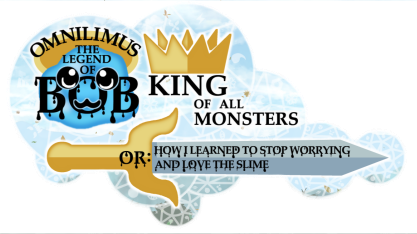 You play as Bob, a low level slime, who through some turns and twists of fate sets out on a journey to rescue the daughter of the late demon king from the chosen hero and claim the title of demon king for himself.

You fight against adventurers as well as your fellow monsters, persuade them to join you in your effort, or vanquish them and make their power your own.
Unlock skills and fill the skill bars of your party members with up to 8 skills each for use in battle.
Complete each area in story, normal or hard mode.

More in the media section.


After a thousand years of darkness, peace has finally come,
so claim the sons of man.

Though as the Human Empires of the middle realms celebrate
the victory of the Chosen Hero over the Demon King,
the shadow of a new threat rears its ugly head over all of creation.

For the vacuum left by the decay of their former master
has thrown the rest of the world into chaos and war.
Demons slay Orcs, Orcs slay Goblins, Goblins slay Lizardmen,
and everyone preys on Slimes, the meekest of them all.

Yet life still remains mostly calm back in the boondocks,
but for how long?


Bob Bartholomeus Emeric Welford:
A Slime from the middle of nowhere.
He spends most of his time collecting herbs in the local forest, until one day...

Carol Medea Georges Fons Smith:
A Bat and messenger of the late Demon King, who is looking for a former advisor of her deceased master.

Dave Mori Madai Sofer Web:
A Rat known to Bob as Uncle Dave, the only person Bob knows that might match Carol's description.

Eve Edith Miru Agatha Faye Won:
A Spider and guardian of a certain ruin, who joins the group after events happen, that relieve her of her duty.

Mistress Alice Adda Lia Mines:
Daughter of the Demon King, currently held captive in the middle realms. Used the last moments before her capture to send Carol to find Dave and request his aid.

Victor Enoch Theo Meir Ash:
Father of Bob and former Dark Knight of the Demon King. Killed in action by the Chosen Hero.

The battle system is mainly inspired by GW1 and Pkmn.
It starts out as 1 on 1, but both player and enemy can have additional creatures. Maximum Number of participants is 1 main and 7 team members, so a 8 on 8, not counting summons.
Almost every battle has 4 possible outcomes:


Loot can be used to unlock skills for use in battle, (as well as some special field skills to manipulate objects on the map) bodies that grant certain passive effects like status condition resistances and permanent stat increases.

Essences are used in battle, most skills require some essence durability to be consumed in addition to mp. This amount increases if the used skill is different from the two active essences. Active Essences can be switched mid battle, this takes one turn during which you can't take any other action.

Recruits join your army permanently and can be used in battle.

Battle. The Powder Keg that was placed on the enemy side was set on fire by embers and exploded.