Star of the Morning...

The Morning Star is a visual novel made with Renpy by Ronove.

In this game we play as Alec, a reserved guy that find himself on a field somewhere far from home. His phone and Mp3 are dead, it's cold and nearby there is just a bus stop and a pay phone. Soon he will meet a strange person (this whole situation reminds to me of Donnie Darko, but uhm ok!). Is he a serial killer? Or is he here to helo him? Well things will gradually become clear.

I already mentioned that this is a visual novel, so as can you expect there are lots of dialogues (excellently written in my opinion) and some choices that will determine how things will develop and which ending you will get (I know that there are indicated three endings, but I just got two
Show
plus one where the game loops restarting from the beginning, so I guess that is the third ending... maybe!
).

Besides the dialogues what I loved was the graphic design of the two protagonists and the backgrounds: all is really professionally made and really stylish, it's like reading a comic book. They also have various stances and pictures that complements really well the narrative flow, and I admit that graphics were the first thing that made me want to play this game!
([speaking about this:

Show
even if the to protagonists' faces are quite similar and for a second I was convinced they were the same person from two different timelines or something like that... ehe anyway it's me, probably!
). 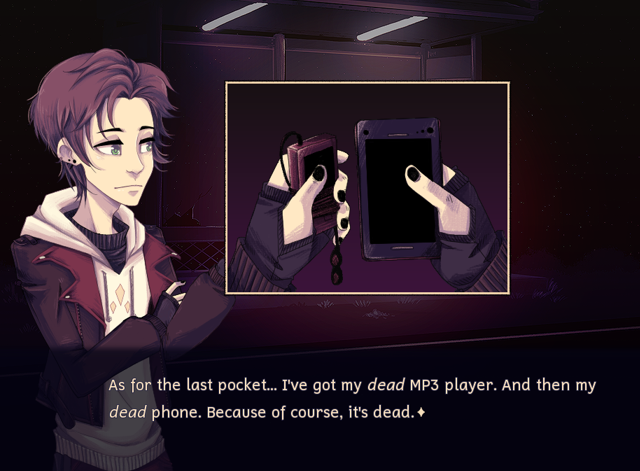 Another aspect of this game of excellent quality is the use of sounds and music! Really, I sometimes stopped playing just to listen to the music of the game, it's really atmospheric and really appropriate. Sounds fit perfectly the setting and make the game really immersive.

The only things I did not like were the scarce quantity of choices and differences brought up from the decisions, I mean, I never play lots of visual novels but I expected some more "gameplay" with more interactions and choices. But even if rather linear I liked it a lot anyway (still considering that I played few visual novels I consider this one of the best ones both for visuals and sounds).

It's also not overly original (despite the beginning suggested various possibilities, but also the title is a giveaway about some some of the question that could arise playing this game), after a first element of surprise I am sure that many players could figure out what is going to happen next, anyway this is not a problem because despite that the themes are treated with experience and the final result is a deeply emotional tale that will surely move the player.

There is not much else I can say about the game (it is linear and not very long) without spoiling it so let's move to the...

Final Verdict
This is a lovely short visual novel, with pretty visuals and excellent music. It's well written, interesting and even if it will take one hour of your time it's a really good time. It is noteworthy that everything happens in a single location between just two characters (even if there are flashbacks and interactions of some minor characters that are not physically present). The sensitime themes are allo treated with care and I liked how this all turned out.

I played it all, and more than once just to see the differences and unlocked all the gallery, so I can say it was a good game for me! Rating 4/5, surely the highest I gave for a visual novel so far!