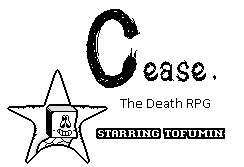 A new game by Janson Kumori!

WARNING, THIS GAME CONTAINS... blood, portrayals of death, mild swearing, and finally, parody depictions of Nazis, cults and dictators. This game contains absolutely no hate speech or tasteless humor at the expense of others. The use of these groups as villains is akin to Wolfenstein 3D, which was a pretty big inspiration for this project.

But regardless... YOU'VE BEEN WARNED!

First, Do A Little Prayer And Read These Receptions...

"...More than one minute of gameplay, simply amazing..." - Horror Goblin

"...So many digital landscapes held within' this computer application..." - Mage

CEASE! This thrilling experience may not contain what I listed earlier, but it does have... blood, DEATH, DEATH, DEATH, digital mostly original music, a extensive and explanatory 50 page player's guide, a free printable map, Nazi destroying action, and finally, amazing Kumori type weather that I wasted all of the project's budget on! You can have all of this for the price of nothing, that's right, you don't need a single dollarydoo to play this!

If you're still not convinced that this game is for you, I'll list some of the things you can do in CEASE!

Think you've got what it takes to beat Adolf, Hitlers resurrected
yet split counterpart? Think YOU, can find the cultist that inhabit
the lands? I don't think you can, or maybe you could, I don't know you on a personal level.

"Haha yes, think you can beat our new regime?"

Another main idea, was to make a game that was the perception of what a RPG would look like to someone who had never even played one before, like the fictional games you see in the background of movies or cartoons. They always seem to look oddly familiar, but you really can't pin point what game it's trying to be through the eye hurting choice of colors, they usually end up looking like Q*bert or some form of an arcade game, I wanted to do that, but with RPGs.

Though none of what I mentioned above had the same impact on this game than my dreams, that's why sometimes, the game is illogical, but other times it seems to make sense. Of course, I took some liberties, because this at least, has to be a vaguely coherent game, and my dreams are not really that coherent.

Expect a release before August or on that month of 2021, if you want to support this project and my other future endeavors, you can buy the OST for any price on Bandcamp when the game is released, it's my first venture into music composition, so hopefully you'll love it! The biggest thing you can do is show interest in this project by either a comment, or, positing about it online, sharing such an awesome friend with your buddies is caring!

Get indoctrinated by Kumori today by joining the discord! https://discord.gg/2J2gbKp6ct

Watch My Trailer, Or Cease To Exist!


Enjoy the trailer, I worked semi-hard on it!
Office.

A parallax full of Kumori.