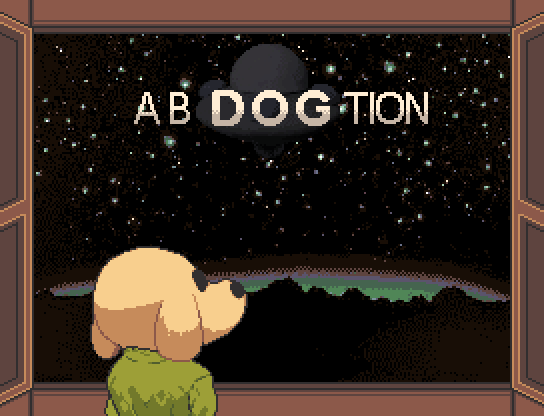 A dog and his dog!

Welcome to the review of a new game from a new developer, this time I played Abdogtion, a game made by Ikoru with RPG Maker VX Ace and available in english, spanish and russian at this moment.

Abdogtion is the story of an anthropomorphic dog that lives with another dog, Idè... who is his pet (not unlike Disney's Goofy and Pluto, to make an example). One night something weird happens: the dog disappears and our alter ego sees a flying saucer flying away! Abduction? NO! Abdogtion!

Our protagonist states his intention to go and save Idè in one of the few written sencences. In fact the game has almost no dialogues, just descriptions but for the most part it's a "silent game with a silent protagonist". In the beginning we start inside the house where it's possible to find the instructions and some hints, and this house is in the middle of a little village populated by other antropomorphic animals, complete with a store where it's possible to buy supplies (when you will have the money, that is!).

Abdogtion is an adventure/esploration game with puzzles and combat. Let's start with the puzzle: paths will be often blocked by some kind of obstacle (statues, metal spikes), so it will be necessary to find the lever or button that removes the obstacles, and this often means solving some puzzles. We have the classic slide (on ice) puzzles, crate p̶u̶s̶h̶i̶n̶g̶ kicking puzzles, those puzzles in which you have to walk on all the special tiles just once to open a particular access, or walk a particular path to avoid falling below and a couple of others. Overall I think that all enigmas and puzzles are well made and not too difficult (if you know what you are supposed to do since the game won't rell you), and later once entered the flying saucer things become even more interesting (with more and harder puzzles and enemies!).

The game is also forgiving since you have four slots and not only you can dave anytime, but there is also an autosave feature. Nice! 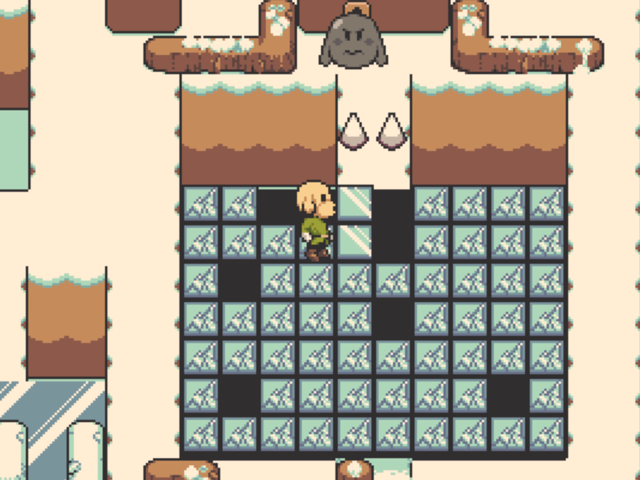 Ok, now combat! Our lone (and lonely) hero in the beginning can attack only with punches, and has three stats that you can increase with level ups: Health Points (or life points, you surely understand what they are), Msna Points that are used to activate special abilities, and Pin Points. To understand what are Pin points you must know that Pins are items that can be equipped by our hero.
Each Pin has a cost in Pin Points, and he can equip multiple Pins up to five or up to the total of Pin Points, but what will do these Pins? Some give him immunities (to poison or fire for example) or increase Health/Mana points, others let him use special attacks, and some give permanent abilities like regeneration or stronger attacks. More Pin points means more options, but you also have to find and collect these Pins.

Ok, but how is combat? From what I wrote before you probably expect a classic jrpg ATB combat where you select actions performed by the hero, standard attacks and special abilities, or using items (and there are both healing consumables and damaging items like orbs that act as "elemental grenades" attacking all opponents with some kind of element). And it's partially correct. Partially!
Combat is in fact a bit more complex due to the presence of quick time events: when you attack you have to press the Z key at the right moment to do more damage (or to do *some* damage against tougher opponents, clumsy attacks do 2 to 0 point of damage only!), and the same when the enemies attack, in order to evade their strikes. It needs some pratice to find the right moment to dodge for each enemy, anyway it helps a lot winning fights, considering that our protagonist will be often outnumbered.
Special Attacks need to input a combination of keys in a short time, or mash a single button, and this also happens when the protagonist has to avoid opponent's special skills (like the drain life ability of the mosquitoes, for example). There are NO random encounters, all enemies are visible, in some cases they can be avoided (because they are standing still or defending some loot that you may or may not want), in others they must be fought (when they block a path that you must traverse to finish the game). 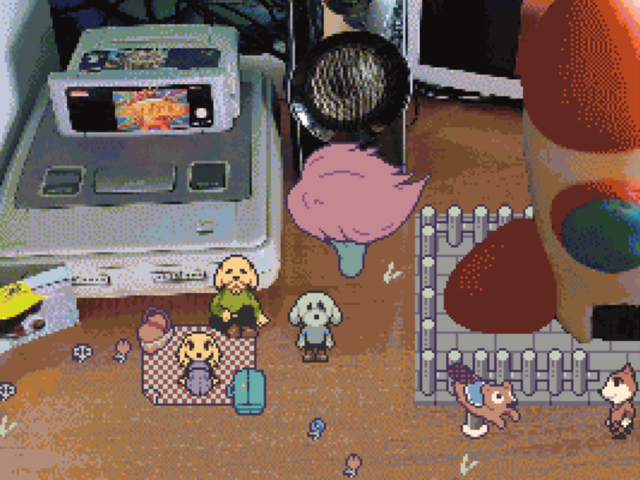 It will probably not a surprise if I tell that the game includes some one to one combat encounters against strong bosses that possess different abilities and require a precise strategy to be defeated, besides fast reflexes of curse. They also have many Health Points so these are tough fights, but not impossible, especially if you have some consumables left.

Graphically the game look both cute and unsettling at the same time, and is also very interesting, because it mixes original pixel art with clay models.
In some maps there are areas that have not so many details compared to others (like for example the shop), but in the middle of a snowy land I guess it's normal finding some barren areas.

I liked very much this game, but there were a couple of things that I did not like too much: first was the use of Z and X (or Shift) only. Yes, normally you can use also other keys for the same commands, like Esc and Enter, ad I admit that for some reason I'm more used to them. But in this case I couldn't so I found the key setup a bit less comfortable... but ok that's me, probably! Also a minor problem, Jandro's and other ducks health bars is overlapped by their spritea, but it's not a big problem!
For the rest the game is good, combat can be a bit taxing due to the necessity to get good at hitting and avoiding opponents (besides the need to understand their behaviour because some monsters will use counterattack immediately after you targeted them! Ok, learning the attack patterns will help a lot anyway). On the other hand some enemies are harmless since they only provide buffs and healing to the attackers... and I noticed that somehow they stop doing that after a while, still I won't complain! Difficulty is well balanced, I think, even if I do not understand why shops do not sell MP potions, making them quite rare! 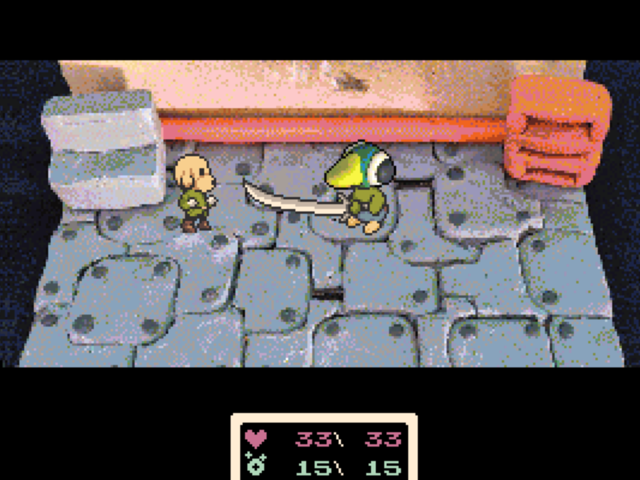 Final Verdict
Abdogtion may not be a perfect game, but it's surely a good one and it's important to note that it distinguish itself from the others. The game is a mix of classic and new, both for mechanics and graphics. As I said before, but it's cute and sad at the same time, colorful and unsettling. It's a short game with a simple premise (there aren't many character and not even lots of dialogues or an epic story...apparently! Things will be more and more complex as you proceed), but I must say that is offers different challenges in an original and bizarre world. Also custom graphics and the bizarre environments are always appreciated, and the gameplay is well thought out, and makes the solo adventure more interesting (and combat more dynamic).

One thing I particularly loved are the small details: the bell sound when you enter the shop, the possibility to look at the television or into the houses from the window... these are all *useless* details that nonenthless I found and made the game more memorable.

The game took me 2 hours and 10 minutes to reach the end, and I was at level 9 (I spent some time also beat the record at the arcade game inside the flying saucer! Oh yes there is an arcade game!).
I think this is a pretty good game, simple but solid and quite different from what you may have played before. Really. Try it!

So thank you for taking your time into reviewing the game.

author=Ikoru
I may be a bit late, but I wanted to let you know that some of the improvements I've made for the version 1.8 were made keeping your feedback in mind.

So thank you for taking your time into reviewing the game.

Ah I'm really happy to hear this! This was an original pretty game and I especially loved the second half of the game!
Pages: 1