World Remade and the Shallows

The best way to market this game (to the very limited extent it's even being marketed, of course) is as a sequel to Master of the Wind. In terms of the story chronology, that's accurate. But one of the surprises of Legacy's development is the extent to which one of the orphaned Solest projects is guiding the plot.

World Remade was a contest entry that brought the core Solest team back together (me, ArtBane and Enkur) along with some new friends helping out. It takes place right after the Rain of Fire and follows a motley crew of characters trying to make sense of the chaos around them. A pious kobold named Rustek forms an unlikely alliance with Taraja, a shadow mage. In the portion that made up the contest entry, the two of them join with a certain other popular Solest character to free the remaining people of a small village from the control of an unethical necromancer.

We busted our asses to finish the first part of the game in one month and had plans to develop it further. That didn't work out for a few different reasons. It wasn't until we had left it behind that both ArtBane and I came to an agreement on what kind of game it should have been, one that would have been different from the traditional RPG path it was going down. If you know me, you know I don't like to leave things unfinished, but I also don't have the means to go back to it and do it right.

For now, I suppose I can settle for addressing the story some several hundred years after the fact. One thing the prologue for World Remade revealed was that the Rain of Fire didn't just devastate the world, it also destabilized the boundary between Solest and the Void, an alternate world that summoners borrow their creatures from while they do battle. The creatures emerge on their own all over Solest, disoriented and violent. The full story would have seen the characters find a way to undo the damage.

The boundary between Solest and the Void was fully restored...well, almost. If you wander around the Shallows, this might happen. 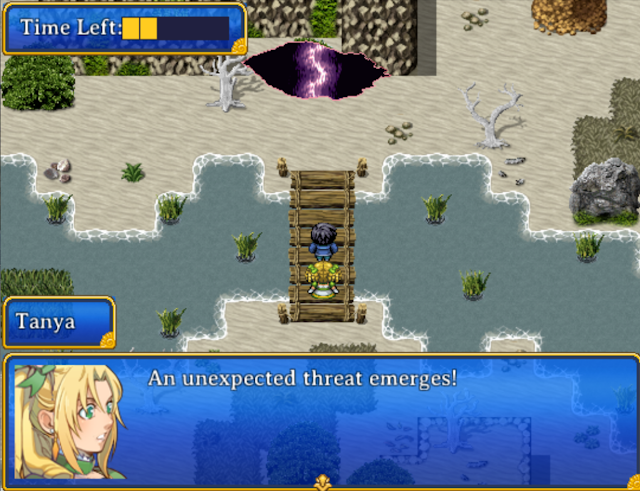 For some reason, this area never stabilized and people have learned to steer clear of it. But if you're a group of young students eager for battle and exploration? It's hard to resist. It also may hold some answers to the mystery about what exactly is going on in Gallia during the game's main plot.

Encounters work differently here than anywhere else in Legacy. There are some areas where a creature from the Void will appear on some days but not others. While you can still see the encounters on the map after they appear, you never quite know when or where they will turn up. The Shallows is easily the most atmospheric region in the game so far and I don't want to diminish that with the fights being too frequent. If you do choose to fight the creatures, be careful because most of them are pretty tough!

You can also learn more about World Remade by collecting entries for Bradley's journal. All the main characters for that game will get one eventually and combined with the plot's references to those events, should paint a pretty clear picture of what the story to that game would have been. Maybe not as good as if it had actually been finished, but it's something.

I've been quiet for a while (and I was in a bit of a rut for a few weeks) but there's more being done that I can share soon. Peace bros!

Close
04/01/2022 12:30 AM
Ooh, I think that's a neat mechanic for the Shallows! It also makes me fear it because knowing my luck I'll run into something with no healing items and then eat dirt, haha! I can't wait to be able to explore it though!!
Pages: 1