Hey all, I wanted to post this link to the blog here!

I would love thoughts!

I plan to release regular progress updates to give players an idea of what is going on in GM: Langris as I develop it. This will keep me accountable while also staying diligent to the project. This first progress report is meant to give a full idea of the major aspects that are key to making Guild Master Langris, the game that I envision it to be.

With that vision, the following aspects have been the focus of my development so far:


As Rudne, you will get to explore the many storied lands of Langris, from the mystic ruin filled southern kingdom of Grisford, to the five beast clans in the Land of Fang & Claw, to the mysterious scarred landscape of the Ashlands in the center of the continent, and many more locales. With Dungeon-Delving being a major way to explore and find great new resources, you can build onto your Guild's property and build new weapons, armor and items for Rudne and her guild mates.
Growing The Guild

The whole focus of the guild is to get the feeling of building your Guild from the ground up. The 5 Attributes of Society are major factors in this series, so the development your guild facilities and assets will effect these things! Choosing to purchase new buildings will not be a linear progression, as choosing to build certain facilities over others comes with pros and cons. I'm in the process of charting out the development tree for guild progression, but that will take a little bit. Also, more than establishing buildings in your "Guildquarter" you will have the opportunity to establish outposts and take up residency in buildings throughout Langris, that you find as you explore.

As you explore, no good RPG would be good without good combat! My hope for the combat of Guild Master: Langris is to create a combat system that rewards a mastery of its elements. Opening up new opportunities for players who learn their enemies weaknesses and exploit them, while creating challenging and dynamic battles that require strategy as the game goes on. On top of that, characters will have various classes and "specialization" opportunities throughout Guildmaster. As characters level up, they will get to choose what skills they would like to focus on. Choosing certain skills will prevent characters from learning other skills. (Choosing to follow the flame spirit Moto, prevents you from creating a contract with Burafu the Ice spirit etc.) These choices will culminate in players making wildly unique party compositions.

Much of the story of the game will be focused around heavy characterization of the individuals that are in the world of GM:L. With a lot of optional character interaction in the form of quests, fun interactions and cutscenes, I want characters in Guildmaster to be endearing and memorable. I will be putting a lot of stock into the writing and development of each character.

My main focus right now is establishing the main systems of the game. Setting up the coding for day/night system of the game is crucial, as many of the other elements of the game are dependent on it. In essence, it will be fairly simple, but I am creating processes and common events that are going to be the bread and butter of the game. 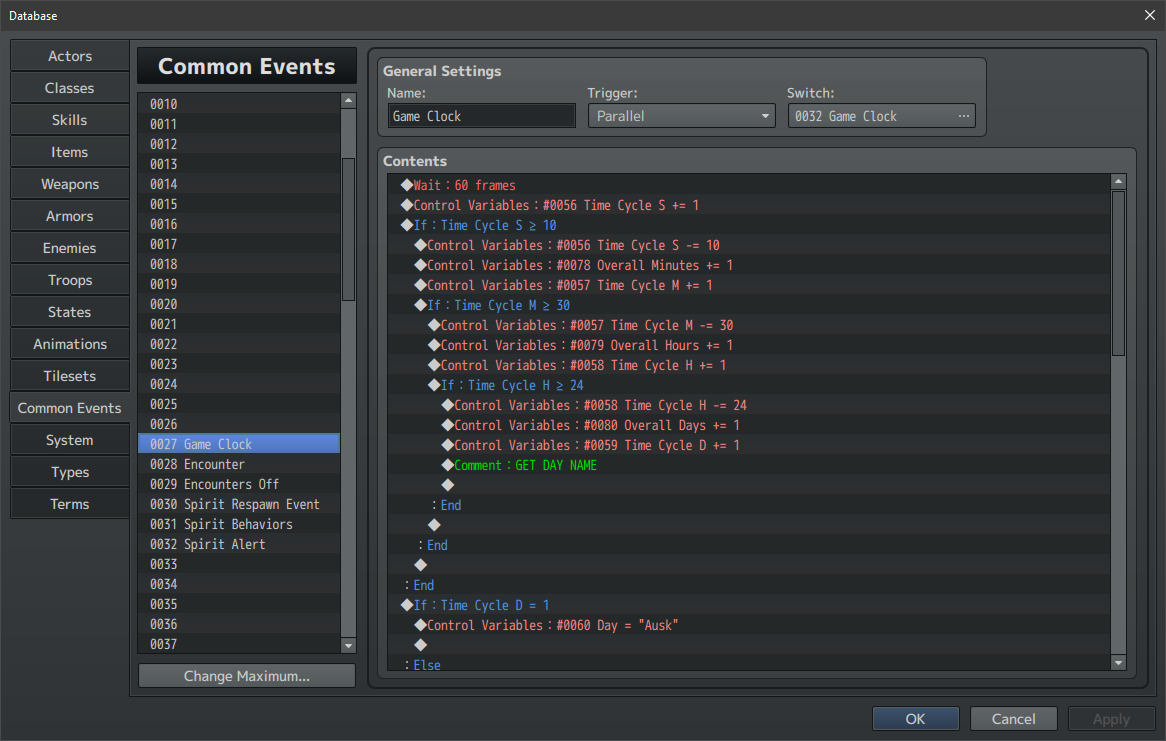 I am currently looking for mappers, pixel artists, coders and editors to help with the project as well. Though it's not imperative, I think if I had 1-2 more hands to help with the game that would increase the productivity and the quality of the game overall, so I would be delighted if there were someone who would like to join the project!

I'm currently working toward a demo that will setup the the first parts of the game, showcasing the battle system and some basic development mechanics for both your characters and the guild. I am hoping to release the demo by Mid-May.

All of this will lend to a story where Rudne has many choices that will shape her and her guild's reputation, allowing her to recruit 20+ characters from around Langris, to join her exploits to become the most prestigious guild in all of the land.

Future updates will not be this long, as this is the first, but you can expect these once a month in the future, around this time each month.