Digital Soul Data is a top-down bullet hell shooter. Play as a hacker, Mia, who uses avatar NB4 to blast her way through cyberspace and retrieve her sister's Digital Soul from eternal virtual slavery.

Digital Soul Data (DSD) - is a technology that learns behavioral patterns of certain people and replicates them via machine learning. It is most frequently used to make people’s DSD work for corporations, although the digital soul functions less intelligently than its original owner.

Last year the government passed a law allowing the use of Digital Souls from people no longer working at the company, including those fired or even deceased. This led some corporations like Modeus Corp. to overwork their employees to the point they quit their jobs. Many committed suicide, which turned out to be insanely profitable for corporations continuing to operating DSDs, further incentivizing abuse.

Infuriated by such injustice, a well-known group of internet hackers, "Knights of the Western Calculus," contemplated an attack on the Modeus Corp's Data Fortress. They planned to infiltrate the database and destroy DSDs. One of the Knights, Mia "Glasscannon" Norwell, joined for more personal reasons…

Inspired by such shooter series as Touhou Project and Ikaruga, Digital Soul Data combines elements from danmaku and shoot-em-up genres - waves of bloodthirsty foes and challenging spell card patterns to keep you on your toes. Face 8 unique enemy types and a mysterious boss, while building up RAM chips and charging Power blasts to destroy everything getting in the way!

Take advantage of bullets going just shy of your hitbox and score extra points with Graze!

Use your incredible dodging, positioning, and planning skills to engrave your name in the table of High Scores, where the 1337357 of H4x0rz get their title displayed in vibrant old-school ASCII color-cycling! 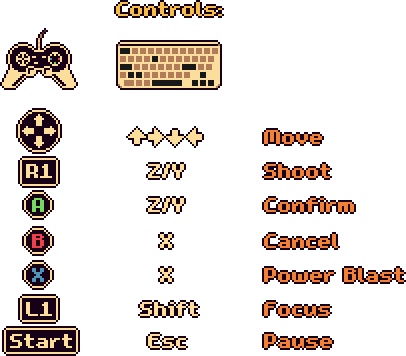 Please note that gamepad support is an experimental feature, mostly aimed at Xbox360-type controllers, may not work properly with some joysticks.

Made in OHRRPGCE game engine for Spring Open Collab event, by: