Magic Quest!
The Kingdom of Aur is in danger and only Mina the Spellsword can save the realm and the world from the evil Wizard Garrick!
But before I start talking about this game let me say two things:
First: this game was made in a short time for the 1.44 Floppy disk event! This means making a game that fits a floppy disk.
Second: this game was made purposely to look like one of these '80s rpgs, like a sort of homage to Dragon Quest (1986), even if I never played it (ok ok, I has a computer, not a console) so it makes me think to other oldies like the Ultima series or the Faery Tale Adventure and many other old titles.

So now prepare for time travel! 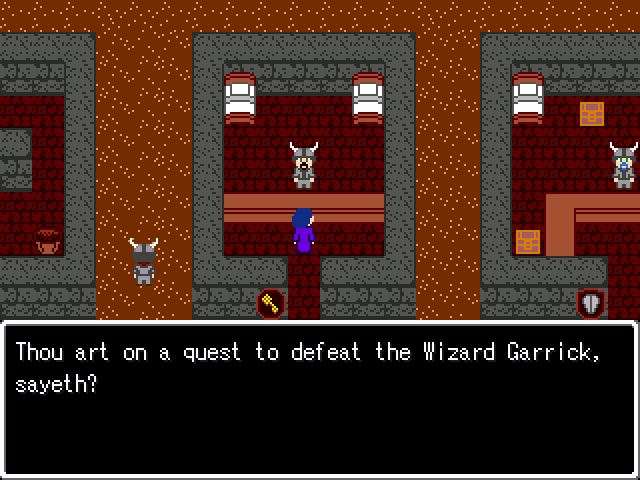 Aye-aye my little keymaker friend! (I like how all dialogues and sentences use an arcaic style... uhm ok my english may be terrible but I noticed this detail!)

Ok. Here's the game, a rather classical rpg with custom graphics! Whoa, that was unexpected, the look is clearly of a simple, old style game but what about the gameplay? Oh yeah, that's classic too!
Like the Faery Tale Adventure I mentioned above, we have a lone hero, and not a group of warriors that have to face the evil wizard. And Mina, our combat sorceress starts weak and with few gold, so the best thing to do will be killing monsters, raiding dungeons and explore the world!

Don't be discouraged by the initial difficulties, because grinding is an important part of the game (like in the old games of the past), the good thing is that you can save anytime and anywhere (and you won't even need to spend gold like in the old Ishar! Lucky you!), and if you die you will be transported to the nearest castle (castles can be considered a good base since they have all kinds of shops)... but I guess that you can simply reload the game!
You can learn many things speaking with random peasants, for example indications to find the dwarven village (where you can buy expensive gear and the useful keys to access areas full of treasures!).

But to progress you need money to upgrade gear and buy supplies, and have some particularly useful items like the wings (that let you exit the dungeons istantly) and the swamp shoes (to walk over some terrain that otherwise will damage Mina). But this is not enough of course!
No, you need to level up, and this can be done winning random encounters against monsters (it's always a 1 against 1 combat so things are balanced... well more or less!), but pay attention because in some areas there are bosses that cannot be avoided, and the encounter will be automatically initiated after stepping on a particular tile (but wait, you can run away from them! But retreating means that, as Gandalf said... "you shall not pass"!). 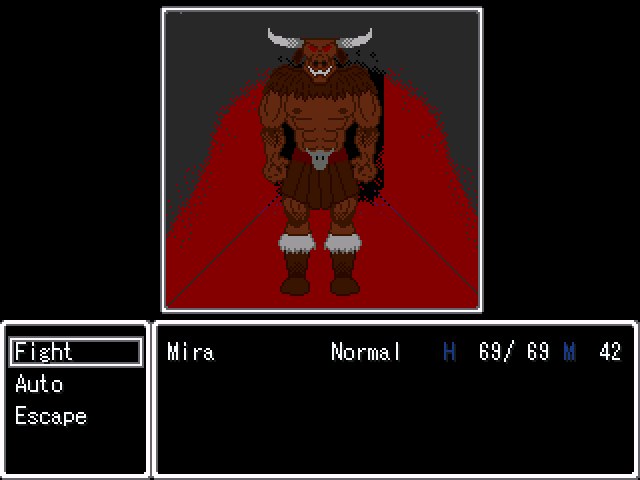 This guy is big and intimidating, but I managed to defeat him. Problem is, later there will be far more dangerous opponents!

Visiting dungeons and ruins and killing bosses will also let you find some loot of course (but you can also try your luck searching the barrels in the villages), including particular items and artifacts like a sword that silences spellcasters, the unique demonic sword and so on. Nothing new cleary, but this is the 1986, guys! Oh and some opponents also drop unique keys that will help you progress the main quest. It's not a surprise if I tell you that Mina will have to traverse all the land of Aur to reach the castle of the evil Garrick, but doing that there will also be some twists and surprises!
But do you think I am going to tell you something? Hah, no of course!

Combat is simple: Mina can attack or cast spells (and levelling up lets her learn more magical attacks and healing spells) or use items, enemies have normal and special attacks (some can even attack more than once!) or spells, but they will try to flee if your level is high! Clearly to keep faithful to the genre you will also find palette-swap stronger varieties of the same monsters and downgraded bosses (like the minotaur), and I liked a lot the visual rapresentation of the encounter: it's all very reminescent of games like Dungeon Master (1987) with a simple first person view and the classic "fade to black pixel effect" of the old games (heh, details that remind of a long time ago!) when the combat encounter ends. 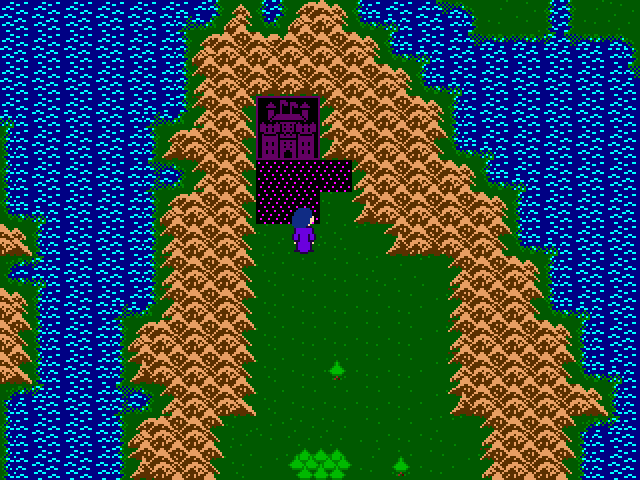 The castle of the evil wizard! How do I know this? Well because it's purple! (and also because there is a harmful swamp terrain right in front of it and it is also at the end of the road!)

Final confrontation awaits... but now the Final Verdict!
Magic Quest is clearly a big homage to Dragon Quest. And one faithful to the genre and times, that I am pretty sure will appeal and entertain only those who probably played the clunky beautiful games of a lost era. Uhm ok, many things will make playing this game less tedious (like the possibility to save freely), but basically it tries to replicate the same feeling of wonder as you explore dungeons in a simple custom graphics (but I liked the use of lightning in darkness used when exploring caves and dungeons, it really adds to the atmosphere!). Oh it's an apparently simple game, but there are many things to find and unlock if you invest some time in it (like items that give permanent bonuses to Mina but are hidden behind locked doors! Anyway the length of the game is about 4-5 hours, I think!).

The idea of making an old style game was an inspired and bold decision, but it worked well, I think! Considering the time and memory restriction I cannot rate this less than 4/5. Nostalgia time, this is Magic Quest!

author=pianotm
Thank you so much for this amazing review!

You did great this time, using selfmade resources and considering the short time for the event. I just wish that some players could understand the references hidden in many aspects of the game.
pianotm

TheRpgmakerAddict
You did great this time, using selfmade resources and considering the short time for the event. I just wish that some players could understand the references hidden in many aspects of the game.